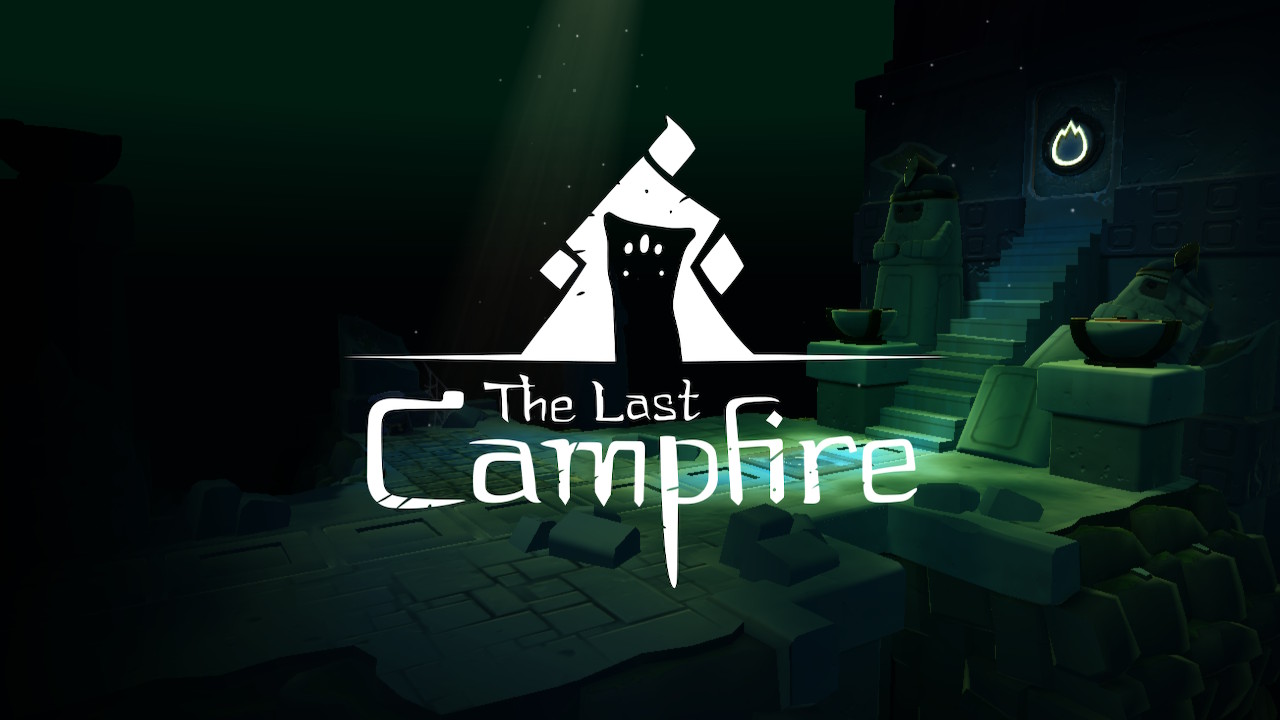 The Last Campfire was revealed in March 2020 during a Nintendo Switch Direct. The game trailer highlighted a unique looking character’s journey through various environments, from dark caves, a forest, a swamp, and more. In August of 2020, the game was hinted as coming to consoles, Apple Arcade, and PC.

In The Last Campfire you play as Ember, a small Jawa-like character (the little desert merchants from the Star Wars series) or a sock with eyes, as my daughter so aptly put it, navigating their way through an adventure to find their way home. The game starts you off in what plays out as you missing your turn through a wandering system of caves in the games opening cinematic.

Once you get your bearings, it’s clear that Ember will need to search the various locations in the game to uncover puzzles opening up the doorways through to the next areas, while also rescuing the Forlorn, others much like yourself, lost in the journey.

I was asked by a friend on the basic premise of the game, which is narrated beautifully as you venture deeper into the woods, solve puzzles, and navigate to the end of this four hour or so journey. As I sit back now, having beaten the game, and think through the story, it seems that there is a bit of interpretation that you the gamer could take from the tale that is being told and the journey you are on.

Ember, a silent protagonist, is navigating various areas, helping others around them, to hopefully reach home. But what is home? Is home an allegory for death or the afterlife? Is home an actual way out of the puzzling twisting corridors you are faced with? Honestly, I think there’s a bit of both here, which seems more like a co-op similar to the tv show LOST.

Aside from whether the story is about death and the afterlife or an actual journey home, doesn’t exclude the fact that The Last Campfire is artistically involving. There’s a narrator that is constantly interjecting bits of lore and world-building done in The Last Campfire while also uncovering small pieces of a journal left by a journeyman before you.

Overall the story is linear, though there are Forlorn that can be found in your own order and pacing, and while finding roughly two-thirds of them will allow you to pass through to the next section of the world, being asked whether you are ready to move on or not by the ghost guarding the door and overseeing the fire, there is a strong desire, at least while I played, to rescue everyone.

The Last Campfire has various camera angles that it takes on, but for the most part, each area is rendered in full 3D, having you navigate in most all directions to find the Forlorn. Finding one of the Forlorn usually turned to rock, activates a puzzle room that can vary from small to large, and can also encompass varying levels of puzzles.

There is a fair share of activating switches, moving platforms, navigating fire-breathing totem blocks, or wind-blocks, that will squelch your flame or impede your progress. Though you can not die in The Last Campfire, some puzzles do have an auto fail/reset mode which will send you to the beginning of that room.

Outside of solving the small puzzles in the game there are overworld puzzles as well, some of which are more clever and entertaining to watch, I’m looking at you piggies eating watermelon-like fruits and wallowing in the mud. The varying sections do change the skills you will need, and as you progress, there are puzzles that begin to mesh and pull from previous areas as a sense of development in the game as you progress.

There are also various items, keys, and statues that you may find that you will need to use to interact with a character you come across, unlock a door, or active switches or solve puzzles. Picking up items is done by interacting with them or selecting an item in your inventory that will aid an NPC you come across.

As you find characters in the game, whether NPCs along your journey or the ghost guarding the path ahead, there sometimes are conversations you will need to select replies for. I haven’t done another play through to know if the game has various dialogue paths, though there is one conversation tree that will directly impact the style and look of an item that is crafted for you.

The Last Campfire has multiple areas to navigate through each with a half dozen or so Forlorn to save, and therefore various puzzle rooms which you will need to solve. Along with those puzzle rooms are the overworld puzzles, NPCs, and items you will need to collect and interact with. The game is mostly linear as you will progress area to area in one direct A to B path.

Early on in the game, Ember does come across a Lanthorn, a magical horn that allows them to interact with blocks and levers in the game. This item becomes both important for puzzle room solving as well as unlocking new paths within the overworld map.

If there is one stand out element of The Last Campfire is its game audio. The narration alone is captivating and only accentuated by the game’s music and audio queues. This is one chill game and feels almost like a children’s book come to life as you navigate and journey further into Ember’s path to the end.

The Last Campfire has a smooth color pallet and overall low-fi cleanliness to its graphics. The game isn’t going to push the boundaries of the Switch, though it does come with some hiccups in frame rate when going into some larger areas or navigating the overworld from time to time.

There are subtle graphical things though I want to highlight, like random birds flying through the world, foliage swaying and moving, and a dynamic lighting system that captures the overall feeling of the game.

Character designs are really varied also with the NPCs you will find. Some standouts are the frogs that will ‘eat you’ and spit you out somewhere else in the world, and a giant pig that you need to overfeed so he moves out of your way. There’s also a mystery involving a character you see early on that starts a bit of cat and mouse pursuit early in the game and throughout each area.

One thing to remember and keep in mind when playing Indie titles is the size of the team. The Last Campfire is no exception from a team of three people, along with some supporting members for audio and voice narration the game is an impressive feat for a small team. While there are some hiccups, it’s well worth the time and money investment.

The Last Campfire was on my radar back in March 2020, and now that it’s here I can say that it should also be on your radar now and well just pick it up. The game is short, but it is well worth the journey. Ember is cute, the puzzles are great, and the story interpretation is something we can discuss.