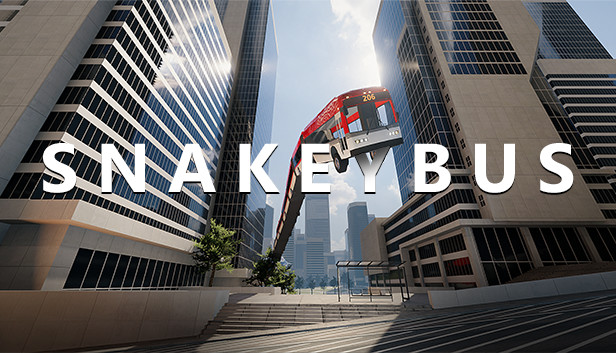 Snakeybus is published by Digerati and arrived in early 2020 on PS4, Xbox One, Windows, Mac, and the Nintendo Switch. While the game does have graphical differences and disparity, it is to note that the gameplay is first and foremost and quite addicting if you are a high score chaser.

There is not too much of a story to Snakeybus. The basic story element, if there is one to be found, is that you drive a bus around and need to pick up citizens. You must then navigate your bus around the streets and drop of the citizens off at their destination.

Snakeybus is reminiscent of the 90s cellphone game craze, Snake. Though, unlike the 2D pixel, fruit-eating game, Snakeybus turns the formula on its head, bringing it into the world of 3D on Nintendo Switch. Your bus and subsequent string of extensions of cars carrying people continues to grow as you move around the levels.

Initially, you start out very small and need to collect citizens at their bus stop then once your bus is full drive around to the marked destination unloading your passengers, while also growing the length of your bus. As you snake around buildings, tunnels, streets, neighborhoods, and even within a dorm room where you are small by comparison, you can jump and boost so you don’t collide with your elongated train of bus cabins.

There are 11 maps in Snakeybus each with their own varied paths and design look. From the rainy city streets to the colorful neighborhood dotted with a soccer field and a school, to the more abstract museum, each environment is unique. Along with the varied maps are different bus styles you can unlock as you amass points that can be spent towards new designs. There’s a school bus, double-decker bus, and many more.

The main game is a classic style approach to Snake where your goal is to beat your high score, and the leaderboards, while avoiding collision or stoppage of your bus. There are also Time Races, Endless, and Aerial modes. While these modes do add to the overall gameplay package, I found myself focusing on the Classic style the most.

Snakeybus has a simplistic audio track, so simple I would say it’s almost non-existent. That’s not to say it’s a bad thing, I just think this is one area that lacks. This is one of those games where I would recommend just chilling out to some music or a podcast while you play, as the audio effects and background music are nothing special.

The graphic style in Snakeybus is a low poly affair that has a simplistic minimal look to it. The game manages to be enjoyable enough visually. The variety in buses and locations are mostly empty streets or rooms though some of them, the dorm room and the neighborhood level, in particular, do a great job to seem both varied and full of life.

As you pass bus stops in the game your passengers ‘rag doll’ float kind of janky-like, though entertaining. The explosions and fiery death when you crash is also hilarious, more so, if you were just points or time away from a clean run and high score.

Snakeybus performs as well both in docked and handheld modes. I didn’t notice any slowdown, though there was a bit of loading in of levels that seemed to take just a bit long in some levels. I never really tested to see if that was a consistent issue or just on certain maps, but I noticed it enough to make a note of it here.

Games that equate to mindless shenanigans are not for everyone. Snakeybus is a game that truly leans heavily into that ‘Goat Simulator’ or ‘Human Fall Flat’ kind of floating and animation style. The game isn’t trying to be a AAA game. Where it does succeed is in that just one more run of competitive natured players, especially if your friends are also posting scores on the leaderboards.

There are a lot of games out there that try to be fun, hilarious, and keep your attention. Snakeybus does a good job of combining all of those things into a high score chasers dream game. If you have nostalgia for the old Snake game on cell phones, you may also enjoy this game.