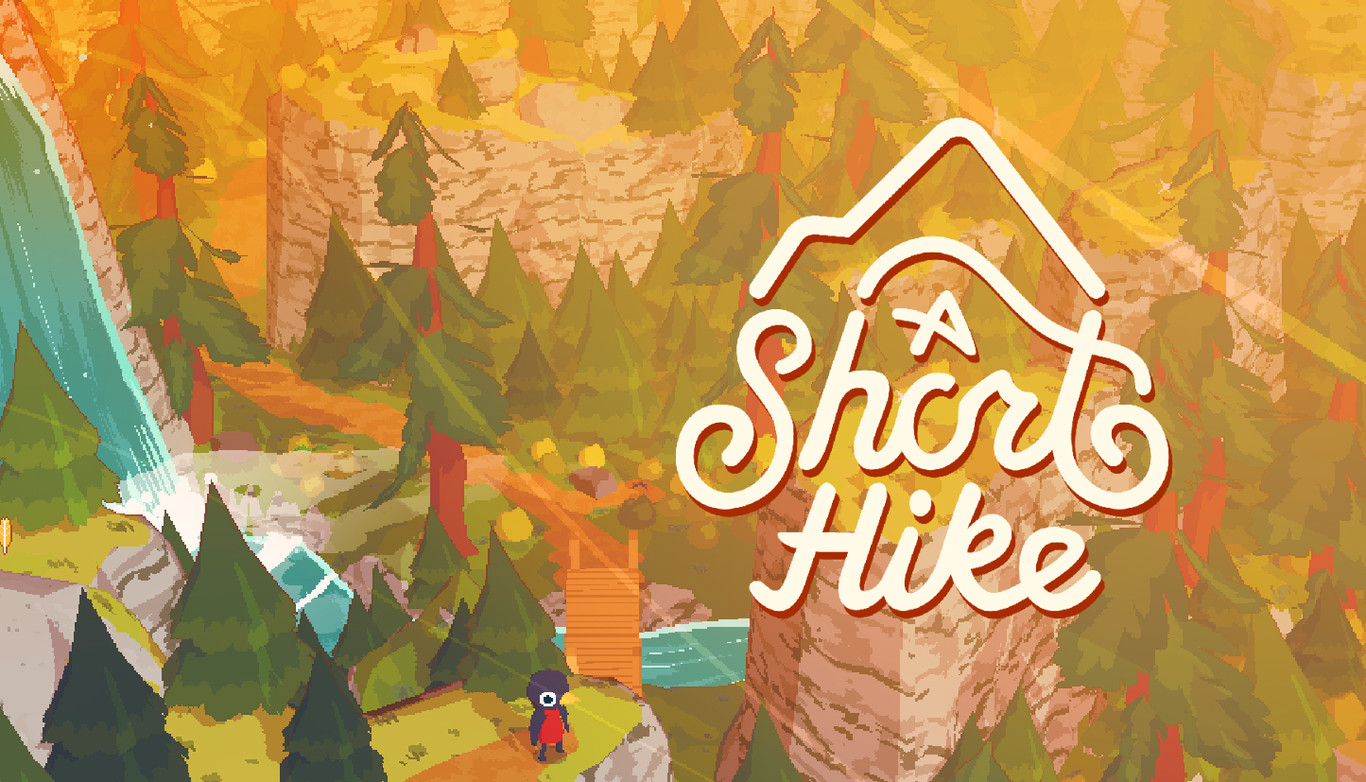 A Short Hike was released on Windows, MacOS, and Linux in the Summer of 2019, and recently, as part of the Indie World Showcase in August, shadow dropped into the eShop for the Nintendo Switch. The game, designed and developed by one man, Adam Robinson-Yu or Adamgryu, as he sometimes goes by. A Short Hike has already garnered a lot of praise for being a fun gliding adventure about discovery and exploration as you quest to reach the top of the mountain.

In A Short Hike, you play as Claire, a small bird persistent to reach the top of the mountain at Hawks Peak to get clear reception to be able to take a very important phone call. As you journey up the mountain you will meet a variety of non-playable characters who will either just want to chat with you and encourage you along your hike, or more importantly, set you out on mini-quests which will net you a very important golden feather.

The story is simple and sweet, as Claire journeys onward and upward, though it’s the smaller moment to moment interactions in lending a helping hand or engaging with those you run into that make A Short Hike a special heartfelt game.

A Short Hike has a simple gameplay presence about it, jumping and flapping your wings to gain altitude as you search high and low and every nook and cranny to find those coveted golden feathers. The feathers, as you will find early on, are needed as they add to the stamina, the amount of flapping higher or climbing up the mountainside, Claire can do. And as you get higher up into the mountain the cold air will chill those feathers momentarily and require you to strategize about how and when to use your stamina.

While your primary goal in A Short Hike is to reach the top those aforementioned NPCs and their side quests will also help add to your golden feather stamina bar. As a recommendation, I would try to talk to everyone you meet so that you can learn of what other needs the animals on the mountain have and how you can help them. Helping a villager out may require you to find a toy shovel, a dozen or so shells, a bandana, and more. There’s even a side quest that sends you on a journey to find numerous species of fish in the rivers, ocean, and small ponds.

One last side note about the gameplay is the simplistic nature of a no-fail set of gameplay rules. If you run out of stamina climbing a rock face or flapping higher, Claire will just slide or glide gracefully down the mountainside to the next level of flat ground. While this can mean having to backtrack back up the paths on the mountain to your last known point of interest, there’s not a way to die, which can be a relief for many gamers.

There are numerous interactions you can have with the characters on the mountain, and this alone makes the reward for talking to NPCs and journeying around the mountainside tangible in its rewards. While you can reach the top with not all of the golden feathers, there’s definitely a minimum required amount that you will need to make it to the peak.

Along your journey, you will also find a treasure chest that will net you coins, need to use a bucket to water flowers that spring you upwards, and use a pickaxe to open up quick travel points that take you from one side of the mountain to another. There are a few cosmetic items you can find as well or pay for, like a hat to change up Claire’s appearance.

The soundtrack in A Short Hike is mindful of its whimsical feel-good story and matches in the subtle yet catchy tunes that play in the background. There’s also a great use of sound effects to let you know when you have found a treasure chest and picked up the coins, the sounds of rushing waterfalls, fish setting on your lure, and more. Each bit of audio makes for an immersive, even if minimalistic, soundtrack for the game.

A lot has been said already about A Short Hike’s visual design. The game in its default state has a chunky pixelated aesthetic that is reminiscent of GBA or PS1 style 3D, or even somewhat DS/3DS like in terms of some of the visual blockiness.

If you don’t like the look necessarily of the blockiness there are a few graphic changes you can make as there are four different levels. Having those graphic choices is nice for those that want to experience the game in varied levels of look and feel. The game performance is well both in docked and handheld and never stuttered or slowed down.

There is a lot more to do in A Short Hike than initially meets the eye. With numerous side quests and a mountain to explore, it is easy to get sidetracked and set out to either fish for minutes or hours, search for treasure, seashells, and more. A Short Hike really is a gem amongst the indie titles, both shown and released at the Indie World, and just in general. The game is wholesome and light-hearted, though the ending may make you gasp a bit as far as the big reveal.

A Short Hike is a short game, most will complete the main quest in an hour or so, though if you want to gain all of the golden feathers and complete all the side quests you may have a bit more of your work cut out for you. All in all the game is enjoyable and can be enjoyed by people of all ages and skill levels.

*This game was purchased by reviewer Jonathan Ober both personally and for this review.