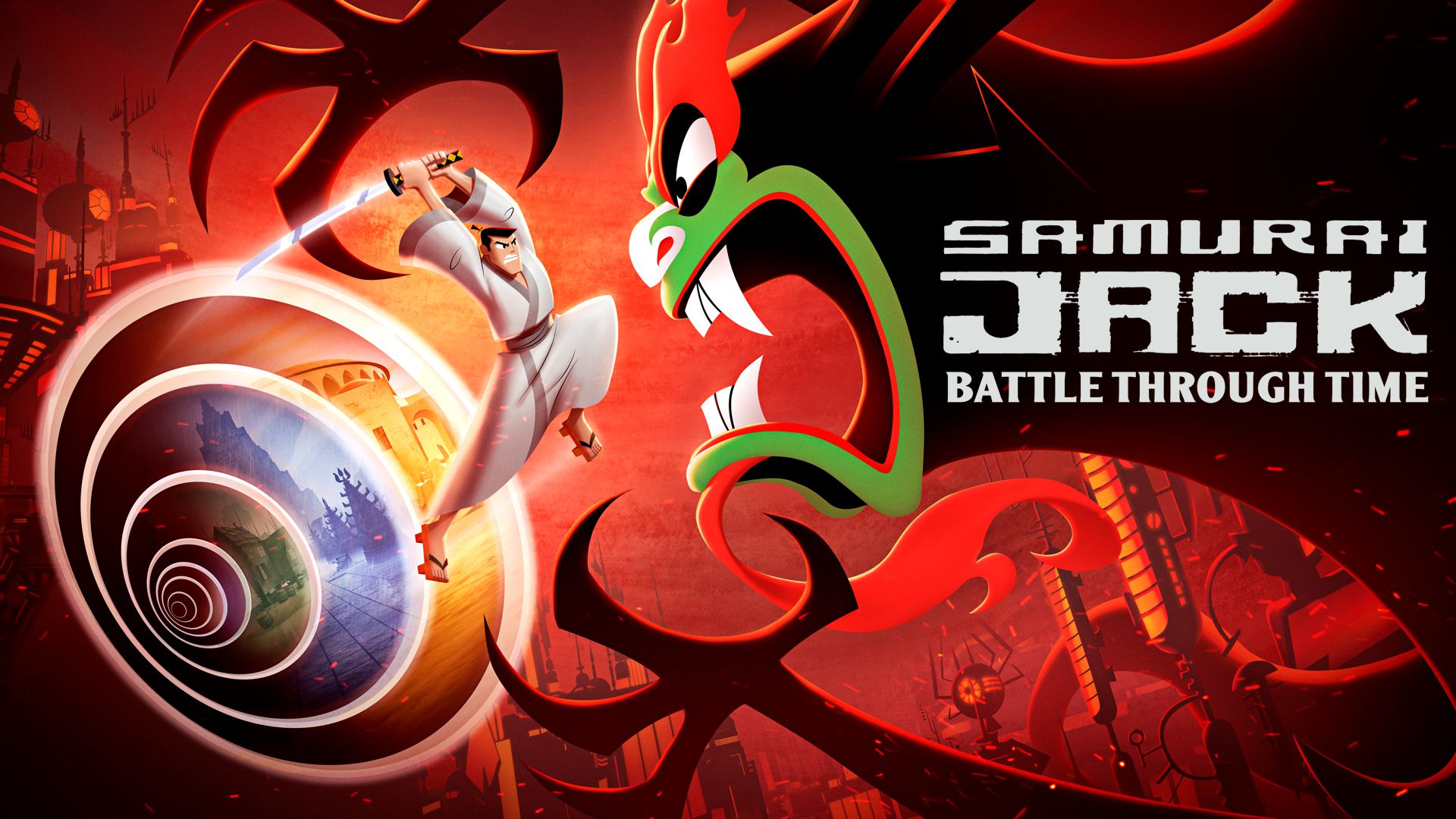 Samurai Jack has always been a fan favorite. One of the best and most unique cartoons to come out of Cartoon Network, it’s relieving to see this series finally get a quality game that is actually part of the canon. Adult Swim Games are no stranger to great games, with the likes of Rick and Morty: Virtual Rick-Ality, which actually received an Emmy nomination in 2018, and other great games for the switch such as Duck Game, Battle Chef Brigade, Rain World, and Pool Panic. Samurai Jack: Battle Through Time is Adult Swim Games’ latest entry and it does not disappoint.

First revealed in February 2020, this has been a highly anticipated title. This is the first major Samurai Jack game in over 16 years and the first time Samurai Jack has appeared in a video game in nearly 10 years. As soon as I turned the game on, I was hit with instant nostalgia as Aku explains the classic intro to the original show. Playing through this title brought me back to the old flash days of online computer games of the early 2000s and I remember the old Cartoon Network website’s flash games and my favorite one was Samurai Jack: Code of the Samurai.

The last time we saw Samurai Jack featured in standalone video games was on the Gameboy Advance in Samurai JackL The Amulet of Time, which received moderately positive reviews and on the GameCube and Playstation 2 in 2004, with Samurai Jack: The Shadow of Aku, which received mixed reviews overall. It’s wonderful seeing Jack back in action and the voice cast is practically, all the original voice actors, short of Aku’s voice actor, Mako, who unfortunately passed away in 2006.

Samurai Jack: Battle Through Time is another take on the phenomenal fifth season of Samurai Jack. Throughout the story, you encounter old favorites from the entire show as well as every villain and character in Season Five. The Scotsman and his daughters, Rothschild and Da Samurai show up in every level to help you out with items and warnings of what’s to come and you battle well-known villains such as Scaramouche, The Bounty Hunters, the Imankandi and of course, the Evil Aku.

Samurai Jack is merely trying to restore his past and his future and save Ashi throughout the entire game. This chapter in Jack’s story is meant to be a sort of extra reimagining of Jack’s final chapter from Season Five. The story accompanies the show perfectly and immerses you into Jack’s story all the way until the end! This title is not simply a nostalgia trip. The writing and voice acting is executed very well, and the writing is classic Samurai Jack. Adult Swim Games really nailed the legitimacy of the series with this game. The story being canon adds to the strength of the overall presentation and why Samurai Jack is such a revered animation.

Samurai Jack: Battle Through Time is a hack n slash action-adventure game with a mixture of play styles. In some levels, you travel and fight in a side-scrolling setting, and then it transforms into a 3D arena for fighting and exploring. In classic action-adventure style, you collect all kinds of items throughout your journey. One thing video games have taught us is when you enter a new area, break all the barrels, boxes, pots and bad guys…you neve know what you’re going to find! There are hidden treasure chests throughout each level and plenty of extra goodies to find as you meet your friends in every level. The game rewards your curiosity and exploration, let no stone go unturned in this game!

There are also RPG elements. As you collect Bushido points, Skill Points, coins, and various gemstones, you can use those to upgrade your weapons, unlock skills, and increase your health and weapon inventory. If you forget to upgrade and you are getting your butt kicked, you probably should spend your points and collectibles. Do not hoard your items too much, as you will use health items like Hot Water and Haggis quite often, as this game is not without a good challenge!

Each chapter has a main boss you’re pursuing to find and rescue Ashi. There are also mini bosses that can honestly be harder than the main boss. The challenge of this game is extremely rewarding when you finally defeat the big boss of each level. The classic enemies like the giant robot bugs, the lion-like bounty hunters and evil ninjas all make an appearance as well as Demongo, Scaramouche and of course Aku!

Da Samurai acts as your item shop in every level. Stop and see him every time he appears so you can purchase items, upgrade your weapon types, and repair your weapons. There is a durability system and you need to be aware of the status of your weapon before you go to town on the bad guys with your strongest weapon. Samurai Jack wields more than just his magic sword in this game.

There is a spear, a great hammer, a club, and your fists that you can use so you can experience your story your way. The variety of weapons really keeps the game interesting. Many times, hack n slash adventure games can get very repetitive, and luckily this game doesn’t suffer from that. There are also ranged weapons like throwing stars, knives, bow, and arrows and a couple of guns to wield to take enemies down from a distance.

There are not many extra features in Samurai Jack: Battle Thorugh Time as of now. However, this being an arcade-style adventure game, it does track your progress through the game like how long you’ve played and it also includes its own achievement system that I am sure the completionists in the world will make it their goal earn them all.

Aside from that, there are a few difficulty levels that do add to the challenge of the game and there are plenty of hidden items and different special weapons throughout the story. Unfortunately, there is no multiplayer or co-op modes to allow you to enjoy playing this game with friends. Still, this would be a great game to play with friends by taking turns on who can get the best high score or a final grade for each level.

The opening sequence when you turn the game on is the exact opening speech Aku gives at the beginning of every episode. This is pure nostalgia for my generation and I enjoyed every second of it! The audio of this game is very well done. Every voice actor, except for Mako, returned for their characters, and their acting and recording quality is very well done.

There are times when audio quality can drop, especially if there’s a lot of background noise in the scene. Sometimes the voices get covered by background noise. The combat sounds for each encounter are very noticeable and can help you strategize on when to block and parry. The music for each level is well arranged and recorded and very pleasing to the ear. Overall, the audio for this game is very well done.

The in-game graphics are a very interesting 3D take on the already unique art style of Samurai Jack. For the Switch version, the graphics aren’t quite as polished or smooth as other systems, however, I still found the graphics very enjoyable and not an entire eyesore.

Handheld mode is smoother than docked mode, but the same issues can apply at times. These are not game-breaking visual issues, they’re just simply not as polished on the switch as other systems. The cutscene graphics are a lot smoother than the in-game graphics as well. The performance is pretty good overall and still an enjoyable experience.

Samurai Jack: Battle Through Time is more than a nostalgia cash grab. The creators and developers really put some effort and care into making sure Jack’s story is told with a great ending all wrapped up just like the release of Season Five a few years ago. Even creator Genndy Tartakovsky had a little bit of involvement in this title.

This game is challenging, fun, and at times quite satisfying. Even if you’ve never seen an episode of Samurai Jack, I believe you will enjoy this experience. This is a great family action game that everyone will enjoy!

Samurai Jack: Battle Through Time is a great addition to the Switch library and is a must for gamers of any age, particularly my fellow millennials who grew up with Samurai Jack when he was brand new to Cartoon Network. This game is a fantastic closing chapter to Jack’s story that everyone will enjoy!