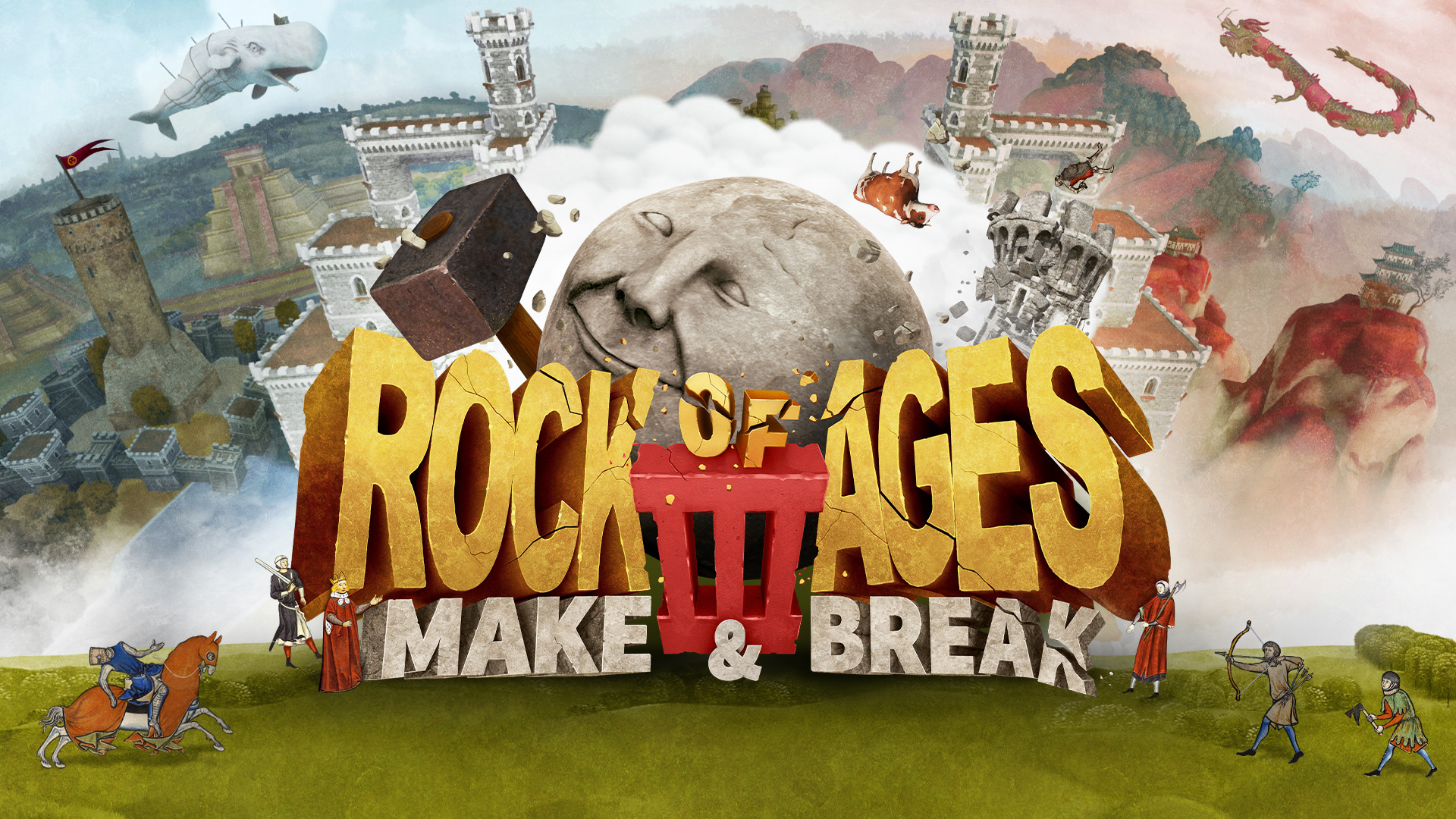 The Rock of Ages has seen quite a few changes since it’s inception in 2011 with the first installment on the Xbox 360, published by ATLUS USA, Rock of Ages II: Bigger and Boulder releasing in 2017 on Xbox One and PS4 and introduced multiplayer. The second installment also saw a Switch release in April of 2019. The games have always stuck to the same formula, however. Rock of Ages is a tower defense racing game and Rock of Ages III: Make and Break introduces map editing as well as competitive multiplayer and some pretty fun arcade styles.

If you are a fan of the sketch comedy liking of Monty Python, you will appreciate the stop motion, cut-out style humor that the comedy troupe is known for. Using archaic art and cutting their mouths out to make them talk like the Canadians of South Park with their quirky, silly humor, the writing can be corny and bland but it is a little funny at times. I found myself laughing out loud at times, and cringing other times so pick your poison with this one.

You take on various historical legends in silly, outlandish settings as you roll a big ball, akin to Katamari Damacy at fast speeds to further the levels. You must use physics, timing, and speed to succeed and progress to each level. Most levels involve a castle and you must protect it (hence…Tower Defense style gameplay…) from various baddies with different tactics.

The fearless and “tall” (as he puts it..) French leader Napoleon Bonaparte leads you through the world-building aspect tutorial as you make your own levels and design a tower defense style game. Each course includes a castle to take down and a starting point. You make the rest in whatever style you choose. Just remember, there is no defense against a boulder to the face…

The story of Rock of Ages is quite irreverent and silly. You begin in the ancient lands of Greece taking on Polyphemus in a classic tower defense style game where you must stop the enemies from taking over your castle. The first level has you rolling a ball of sheep at a giant boulder to take down a cyclops. Don’t think too hard into the story of this game. It’s a rolling good time, at times.

This title requires strategy and forward-thinking. Once your defensive unit is used up, you can’t build in that same spot again. This can prove to be frustrating, however, it forces you to really think about where you’re placing your walls, turrets, spinning attacks, and gold mines.

You can participate in some fictitious renditions of historical events from the beginning of time to the modern era. In Rome, you can take part in an obstacle challenge, a unit challenge, and a time trial as well as the roman war. You can earn up to two stars at each location. The primary constant throughout history is the Rock of Ages, who aids you on your journey through history!

The world-building part of Rock of Ages III can be a little confusing. Napoleon gives you good instructions, but they are very wordy and honestly, when there are so many definitions and descriptions, it can be cumbersome. I had trouble trying to just get started as some of the directions were not noticeably clear. However, it is your basic map editor where your creativity can flourish, and you can make your own boulder-based obstacle course or tower defense map.

In the Tower Defense gameplay, you must be strategic, as mentioned before. You earn coins through gold mines you can place on the map and you must think ahead as each wave attempts to take down your castle. Each wave gets tougher as you progress so be careful about what you place and when.

There is also a physics-style racing obstacle course portion of the Rock of Ages III. You take the boulder, and you race it through the map, avoiding obstacles and falling off the ledge. The challenge lies in controlling the momentum and avoiding obstacles that could damage your boulder.

You really feel the irresistible force hitting the immovable object. You can also race friends online in the online multiplayer experience. This gameplay style can also be frustrating as physics can be unforgiving. Tread cautiously and take out some spectators on your way!

In previous editions of Rock of Ages, they did not include what Rock of Ages III: Make and Break contain. This edition includes a map editor as mentioned above, an online multiplayer and a multitude of levels and challenges to keep the game somewhat interesting. You can also share and upload your creations online for your friends to try out as well! There is also a plethora of different types of boulders to unlock and collect throughout the game!

I was not quite sure what I was supposed to do on some of the game styles such as unit challenges. The direction is not noticeably clear at times and I was left a little confused. The multiplayer experience was generic and trying out other people’s maps was quite fun. Anytime a game allows creative freedom it is always intriguing what people come up with. The Community levels part of this game is probably the highlight of the entire title.

The Classically-trained musician in me is appreciative of the soundtrack of Rock of Ages III. However, the particular versions of classical masterpieces such as Mozart’s Turkish march got to be a little monotonous as I attempted to complete various levels. Switching between the same two or three songs just got a little boring.

The voice sounds are very much like Monty Python in their weird quips and grunts. Napoleon’s voice in the world-building tutorial was a good attempt at a French accent but not all-around terrible.

The biggest ear sore is the alarm when the enemy boulders are on their way in the Tower Defense part of the game. It is incredibly loud and made me jump a few times as I was trying to set up my defenses. The music is not awful, but it’s not incredibly memorable either.

The graphics for Rock of Ages III are not the greatest set of visuals out there. The cinematics is well made for what they are achieving. When playing the boulder race games, the frame rates drop a little bit and can be quite choppy. This is incredibly frustrating in a physics-style momentum racing game.

The Tower defense and world-building graphics are decent. This game does not need to have stellar graphics to be successful, however, it is frustrating when the frame rates dip and it almost looks like a game that belongs on the Xbox 360.

Rock of Ages III: Make and Break has the potential to be a fun arcade-style game with a multitude of gameplay styles, but it can be quite unforgiving and downright frustrating at times. Its humor and witty approach to world history is really it’s only saving grace. The racing games can be fun and challenging, but unfortunately a little too frustrating for my taste.

The map editing and online “marketplace” of maps other users have created is fun and interesting. The tower defense gameplay is different and requires a lot of strategy and thinking. I am not a connoisseur of tower defense games but this one at least seems like it breaks the mold (see what I did there…?) of most tower defense games to keep you on your toes.

If you are into tower defense, cheeky humor and unforgiving physics, this is the title for you. Rock of Ages III: Make and Break isn’t for everyone, but it is not a completely terrible game either.