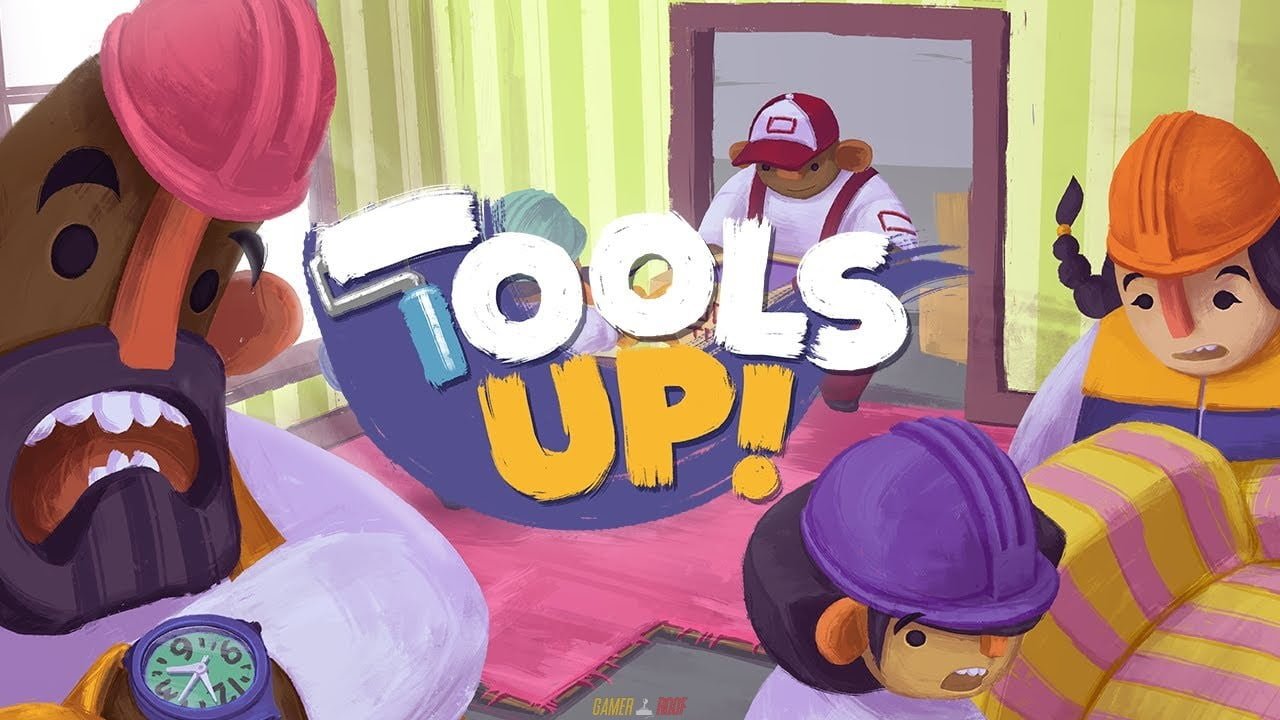 Tools Up is a party game simulating construction jobs in small spaces where you and up to three others get to help…or hinder, the progress of renovating a house. The game came out on the major consoles and Steam in December of 2019.

The visual menu or levels of Tools Up is a floor by floor apartment-like setting that has you amassing stars and progressing up through the building. Tools Up cast you as a crew member a part of a team of versatile renovators and remodelers working your way through project rooms and houses.

During the game’s levels, you will be tasked with repainting walls, tearing down wallpaper, fixing doors, windows, and more. At the end of the shift, it’s your job to make sure the rooms are spotless and empty of debris in a timely manner so you can get the highest score possible.

Gameplay in Tools Up can be a frantic yelling match similar to that of the Overcooked series. In fact, I would go so far and say that Tools Up is mostly just Overcooked with carpentry and interior design in place of food orders and maintaining your kitchen from catching on fire.

During the levels, you will need to complete the room as the floor plans show. Revealing the floor plans pauses the action momentarily, but once you glimpse what needs to be done, i.e. paint a wall, replace floor tiles and carpet, etc. You need to hurry along with your job working together with your friends or family members in a race to the finish.

In Tools Up, you control one of up to four crewmen to match the plans you’re given in the shortest amount of time. You may need to tear down wallpaper first before painting or demolish parts of a room completely before progressing. While you are doing this you and your teammates will bump into each other, slip on debris piles spilled on the floor, and knock one another over. The frantic gameplay is sure to be a riot while you go through the paces working your way up to the top floors.

Tools Up has 30 levels in its base game. Along with just progressing room by room, you can score 3 stars and higher scores. And since the game can be played with up to 4 players, choosing who you complete each floor with may result in a very different style of gameplay.

Along with the numerous levels to beat, there are worker skins to unlock. You begin with four characters and unlock more as you progress through the main game and move up the floors.

Tools Up implore a simple grunt while working sound effect, which is ok in conveying the character of the game, though I wish there was a bit more. There are sounds for slipping on debris, hammering through walls, painting, and more, but all in all the simplicity of the game and it’s audio tracks is minimal. That’s not to say it’s bad, it fits well with the design of the game. And to be clear, Overcooked has a similar sound design as well.

The character designs in Tools Up are cartoony and low poly which fit for the overall game aesthetic. Each room uses basic color styles to differentiate between what changes you need to make. Since there’s not a lot of variety in the various floor and wall styles that part of the game does get a little repetitive in showing you the same basic assets.

I hadn’t had the chance to play Tools Up with more than 3 players, so I don’t know if the 4-player game has any performance issues. I do feel like there were some noticeable stutters from time to time though with framerate when there were three of us in the room doing something all at once.

Party games like Tools Up and Overcooked are great ways to include a group of people or members of a family into enjoying a simple task like repainting a room or knocking down some walls, into a game.

Throw in that one member that always seems to hog the floor plans and you have yourself the makings of a dictatorship management program where one person calls the shots and orders everyone around. If you’re quick to find the plans though and don’t mind sharing the building requirements for renovating the spaces you will enjoy your time in Tools Up.

Tools Up is a great time spent together…though there is always the chance that playing a game like this can lead to fights and arguments. Aside from the yelling orders at family members, the gameplay and fun are here in spades.

Tags: ALL IN! GAMES, Nintendo, Nintendo Switch, The Knights of Unity, Tools Up, Tools Up Review, Tools Up Switch Review