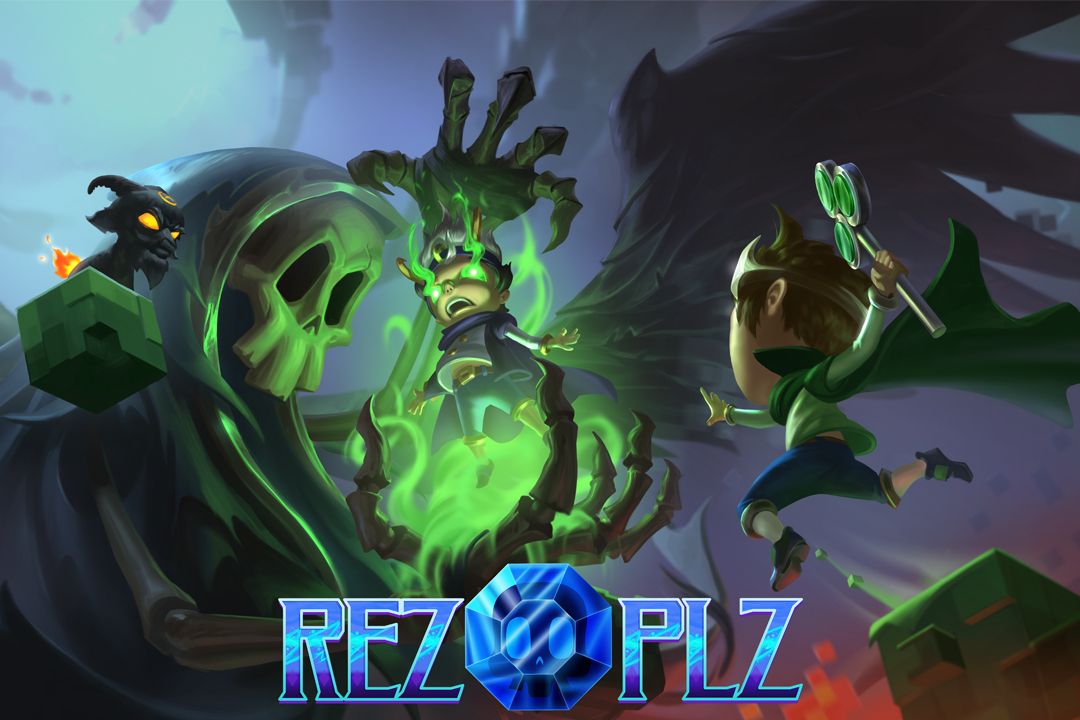 Much of this game is inspired by the campy horror movies of the 80s. The story and overall product doesn’t take itself too seriously and in this day of depressing, post-apocalyptic nightmare games, this retro platformer is a breath of morbid air! I had the pleasure of asking a few questions to the developers about the history of the development of this game. I’ll let their words tell you more below:

Long Neck Games is mainly a two-person team, My brother Nate and I(Josh). REZ PLZ is our first game and started as a spare-time project about 5 years ago when we knew very little about game development. Over the past few years, we’ve shown the game at about a dozen expos, won some awards, and felt like we were really onto something cool. Nate does all the programming and I did all the art for the game, we’re entirely self-taught.

Almost two years ago to the day, we lost our mom to cancer. She was our biggest fan and supporter, and her wish was for us to finish our game and realize our dream, so we quit our day jobs and went full time on making REZ PLZ in her honor. So developing REZ PLZ really is a very personal passion project for us.

For Nate and I growing up in the era of classic NES and SNES games, we wanted to create something that captured the essence of what we grew up on but solve the problem we had when we were kids: only one person could play, and you passed the controller when you died. REZ PLZ is our solution to that, we really set out to create a fun co-op experience whether you have a partner or are flying solo.

In REZ PLZ, you control two Wizards (if you play solo) named Arcan and Zeph. They are apprentices who do not know magic very well. The only spell they know is how to resurrect each other, which is the primary mechanic of the game. Death is part of the solution!

The fate of the world lies in their hands and you are to control the two young wizards to save the world! The two wizards are charming and have pretty great college-level humor. As you progress you get to know their personalities more and more.

With this 2D platformer, the story is not very deep, because it is, at its core, a challenging old school, unforgiving action platformer, inspired by campy horror movies of the 80’s. That alone is enough to make this game a worthwhile experience.

Controlling two characters by yourself is an arduous task. I’d recommend you play this with a friend …you’ll thank me later. The simple controls are achievable for anyone, the challenge is making your way through each level without throwing your controller. The characters’ reactions to your movements are very sensitive, one wrong step or an accidental move of the joystick and your character is burning in a lava pit.

You must have good timing for some puzzles as well as a twitchy, fast-paced platforming.  This game is comparable to the likes of Celeste and Cave Story in difficulty and the reward of making it through is worth it. While I am not the best at 2D platformers, I recommend this game to anyone who likes a challenge and old school style. If you want an easier experience, you can play it in infinite mode and not have to worry about losing rez stones.

Just like the retro platformers of yesterday, you can die in one hit. Each character has 3 rez stones and you can pick up stones throughout the level if you run low. You literally use death to advance through the game. Some spike walls will be in your way, so launch a character to the wall and kill him. His body will stick to the wall and you can use the other character to leap off him and make it to the next ledge. Then revive him!

It’s a unique mechanic that requires some strategy and forward-thinking. This game is not for the passive platformer. As you progress through the game, you unlock various spells to help you throughout the game. I won’t spoil them for you though!

After you have conquered the five biomes and various levels throughout the main game, you may be wondering what is next? REZ PLZ also includes some features in the form of a speed run mode and a gauntlet mode. These game modes are ideal for those who are looking for even more challenge.

Another notable feature in REZ PLZ is the variety of cosmetic upgrades that can be unlocked as you play. You can use these upgrades on your character(s) to give them some extra personality!

In the developers’ blog, you can find a lot of fun insights into the development of this title. Long Neck Games enlisted the skills of The Curtain Puller for the REZ PLZ’s music. I love the feeling of the horror movie music as well as each level’s unique sound and music. As a horror movie fan myself, a good horror story is not complete without a killer soundtrack!

The background music of each level is incredibly well orchestrated. It almost feels like the music of DOOM at times. The sounds of dying in a plethora of ways can, morbidly, be satisfying as well. Don’t underestimate this game’s features and overall delivery!

The graphics and sprites are beautiful and well rendered. While it can be choppy at times, the game runs smoothly throughout. I have recently been playing a lot of old school SNES games and the visuals in this game are a great throwback to fans of the retro 2D style.

In docked, at times the performance can have a hiccup or two but overall runs very smoothly. In Handheld mode, the game truly shines. Games like this are meant for the Switch. This is the type of platformer that you can play in a sitting or binge play for hours!

REZ PLZ is a great platforming experience. You can play this game solo or with friends. I personally think this would be a great party game. Instead of passing the controller, you can get a buddy to join you and use their death to progress through the game! The story behind the development makes me want to play this game for hours. Support your indie game developers!

The game does need some support as the framerates can drop a bit, and hiccups can cause you to die prematurely. The sensitivity of the characters’ movements can be unforgiving. I have fallen into lava pits unintentionally too many times…I also am not the best at old school 2D Platformers, but I am determined to get better!

While the soundtrack is great, the background music can actually feel too quiet at times. I understand the need for concentration, but as a metalhead, I wanna hear some great riffs while I traverse the underworld!

Grab a buddy and check out what it’s like to use death as a positive experience in this great platformer! It’s perfect for the Nintendo Switch and it’s great for fans of old-school 2D Platformers!