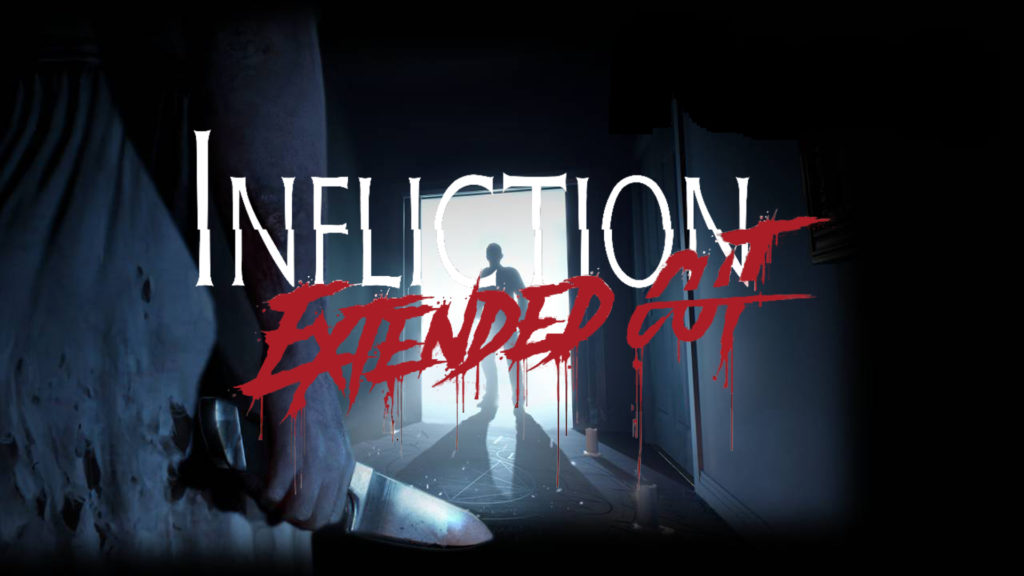 Infliction: Extended Cut is an independent horror game created by Caustic Reality, a studio that is made up of one developer. Clinton McCleary is an independent game developer based out of Sydney Australia. He has a very detailed blog that covers his development history of this title. The fact this game was made by one person is impressive enough!

Using a Kickstarter campaign that surpassed its goal of $12,000 with $15,481, McCleary was able to make his dream come true in developing this game.  Originally released on Steam, McCleary joined forces with Blowfish Studios to bring Infliction to the Switch, as well as PS4 and Xbox One.

Infliction: Extended Cut received a few accolades as well, such as a finalist for Australian Developed Game of the Year at the Australian Game Awards, an official selection at the Indie Showcase at PAX Australia 2018, and winner of Player2.net.au’s 2018 Indie Game of the Year. Not too shabby for a one-man developed game.

In this first-person interactive horror game, you are exploring a house befallen by tragedy. A man who struggled with issues, a family torn apart by various tragic events. As you explore the house, you uncover dark secrets and hopefully, answers to what happened to your wife. Playing out like a classic investigative horror movie, memories lead you throughout

You are Gary Prout. A family man with an apparent drinking problem. Your wife has been murdered and you have to explore all the nooks and crannies of the house to uncover more clues as to what happened to Gary’s wife. The story unfolds in a way that I will not spoil here. It’s a pretty basic horror story that is interestingly crafted. The game does tackle some darker issues of depression, addiction, and abuse so this is not for the faint or weak at heart.

At its core, this is a pretty generic setting. A haunted house. A gruesome murder. Creepy writings on the wall. It is definitely a good fit for any fan of horror, just don’t be surprised by some of the cliche’s prevalent in this game. That is not to say this game is not well put together, it just isn’t very unique in the grand scheme of things.

This title is a first-person interactive survival horror game. You are equipped with a flashlight and pick up various other objects throughout the game. You can pick up just about everything that you can see. The level of detail is impressive when it comes to the generic brands of food, CD’s, even NES video games. He even made an entire tv show to be featured in the living room if you turn on the TV with the remote.

As you discover memories in the house, you hear Gary’s wife’s’ voice bring you back to different memories in their past. You also must avoid the creepy being that’s chasing you. If you stand still too long, you’ll be eviscerated, and you will respawn at your last checkpoint. Later in the game, you can pick up a Polaroid camera that will reveal secrets when you take a picture, which can aid you when you get stuck at times.

One of my favorite features is when your surroundings change as you move around or look around. I jumped a couple of times when I was suddenly attacked. Of course, where darkness is prevalent, your best weapon is light.

This game both rewards your curiosity and tends to hold your hand. If you get stuck, the menu gives you a clue for what to look for next. Each major discovery changes the setting in the house, which keeps things from getting stale throughout.  It is a little annoying you cannot sprint when you’re being chased by the evil force within the house.

This is another horror game that is much better suited to use headphones. When you’re wandering the halls, your heartbeat will increase and you’ll hear creepy, unsettling sounds. If you’re not careful….she’ll getcha! The environment is immersive, and can actually feel unsettling at times.

Infliction: Extended Cut includes the base game and some bonus features. There is a new game plus mode that has tougher puzzles and multiple endings. This story, while slightly cliché’, includes some decent replay value as well as plenty of things to explore within the house. Much like the “Master Quest” version of Ocarina of Time, which includes reverse dungeons, the New Game Plus mode also remixes some of the puzzles in this title.

Once again, for a one-man development team, this is a pretty ambitious title and includes plenty of content for the price as well!

The audio in the game is crucial. The creepy sounds add to the unsettling environment and truly immerses you in horror at times. The voice acting can be a little campy and rehearsed. The voice actors sound quality is great, however, some of the writing seems a tad predictable. The voice acting for the memories can tug at your heartstrings as you progress through the story at times, but much of the sounds you hear in the memories are a little stale.

I felt there should have been some more interactivity in some of the CD’s you find laying around the house. One instance, you turn a stereo on and your ears are assaulted with heavy metal. It seemed a bit too much for a sound that didn’t have much to do with the overarching story.

Infliction: Extended Cut released first on Steam, and then later released on consoles. The graphics in the Switch version do leave a little to be desired. When you pick up an object and zoom in, the picture is pretty rough. There are moments that are clean, however, much of the visuals are not quite as good as they could be.

The opening sequence is particularly troublesome. Frame rates weren’t steady, however, once the game transferred to first-person, the edges cleaned up a bit. The environment is quite dark, which is appropriate since it’s a horror game. However, there were times it was really hard to pick out what you can see at times. This did add to the unsettling feeling of isolation in this creepy house, but it would have been nice to see a little bit clearer.

While there are some drawbacks, this game is pretty good. For a solo developer, this is a really good start for someone essentially working by himself. Infliction: Extended Cut has a lot of potential if you can get past some of the uglier graphics and a standard haunted house story. The isolation and immersion aspects are where this game shines, especially if you’re a fan of “cat-and-mouse” type of horror as well as decent puzzle-solving mechanics.

The first person perspective is a favorite for horror as it creates a feeling of immersion which only adds to the overall experience. Being limited to a flashlight is fine, but the main character needs to be able to actually sprint when he’s being chased by a demon.

The puzzle-solving and investigating is challenging, but there were moments that seemed like it was almost impossible to figure out. The hints in the menu, as well as the Polaroid camera, helped to further the story and figure out what to do next. This is one of those titles where the longer you play it, the more you enjoy the experience.

Mr. McCleary’s game is a great example of what one man can do when backed by a successful kickstarter and connections to a console developer. It is not without flaws, but it is deserving of its accolades. The future is bright for Caustic Reality.