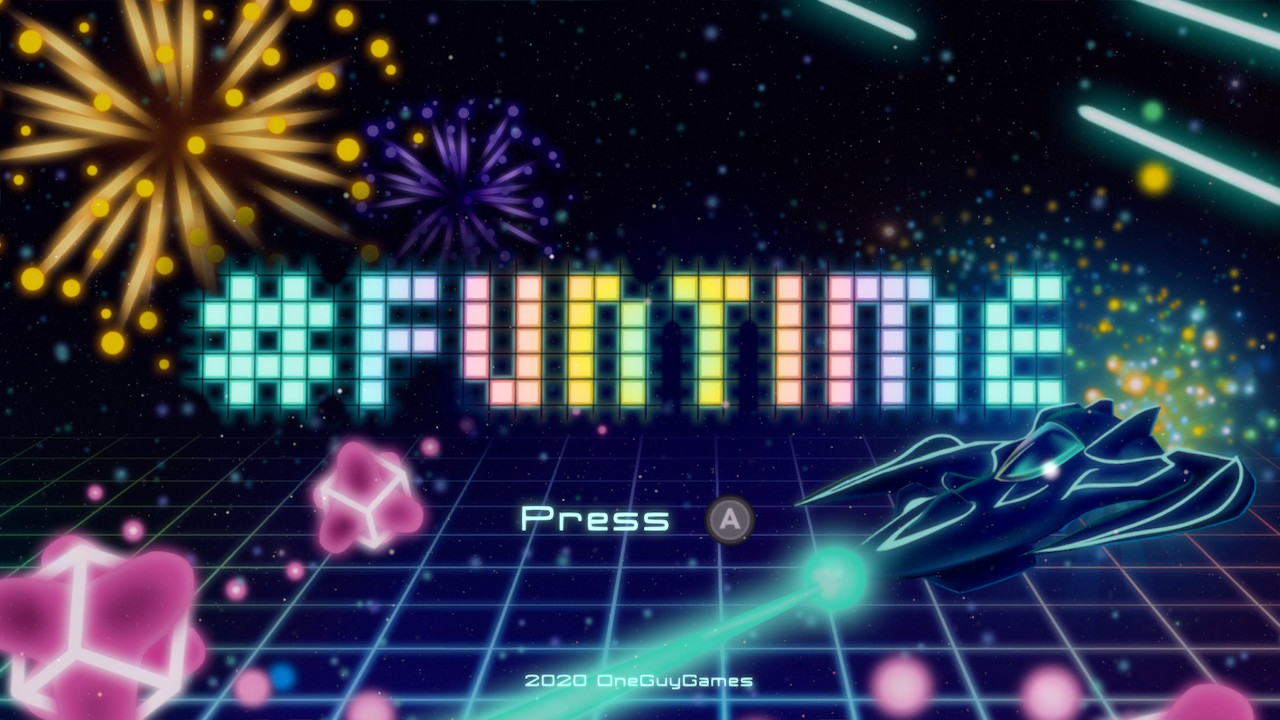 #Funtime was developed by “One Guy Games”, and the company name is surprisingly quite literal. This twin-stick shooter was made by one man, Brandon Robinson. I applaud the developer for getting his game (with the help of publisher The Quantum Astrophysicists Guild) onto the Nintendo Switch, Playstation, Xbox One, and Steam (all of which release simultaneously on July 16th).

#Funtime doesn’t have a plot or narrative, and it doesn’t need one. All you need to know is that you control a spaceship and your missions are dictated by the current level objective.

#Funtime is a twin-stick shooter with a color mechanic that helps it stand out from other titles of that same genre. The gameplay rewards those that master the controls and use the versatile movement options to their advantage.

Move with the left analog stick, fire with the right analog stick, change colors with the face buttons (“A” for green, “B” for red, “X” for blue and “Y” for yellow), boost with “L”, use a bomb with “R”, and finally, change the current song by pressing “up” on the d-pad. Boosts make you temporarily invincible, though you need to wait a few seconds before using it again (to prevent spamming).

Bombs are limited and clear up the entire screen, eliminating all enemies. Upon destroying enemies, they might drop score multipliers. You can rack these to get a higher multiplier, though taking damage resets it to 1.0x.

Color swapping plays a big role in the gameplay. For example, certain enemies can only be defeated if you match their color; the same rule goes for laser beams, which become inefficient. The difficulty curve is quite steep, as managing both the controls of the color mechanic alongside the already challenging bullet hell gameplay that comes with most twin-stick shooters, is a heavy task.

There are two modes: “Challenge Mode” and “Arcade Mode”. Challenge Mode is the main attraction, the “campaign” if you will. There’s a total of fifty-four levels where you can obtain up to three stars in each one, depending on your overall performance and objective completion.

A level can be one of eight different battle modes: Escape; traverse through a labyrinth and escape as fast as possible while avoiding enemy hordes and obstacles. Survival; with limited HP, destroy as many enemies and rack up a high score. Timed Survival; endure as long as possible. Time Attack; get a high score with limited time.

Zone; find safety in colored areas (personally my favorite mode, great for practicing color swapping). Waves; battle rounds of enemies. Open; different to other modes as the camera angle changes and there are no walls or boundaries. Funtime (aka Wrecking Ball); destroy enemies with said weapon and increase your multiplier.

Upgrades unlock progressively through levels. You obtain a companion that helps in battle, you also unlock bullet multipliers, just to name a few improvements. There’s also the possibility to skip levels that are too hard to do, if you have enough stars to progress. You can skip multiple levels and return at a later time. I appreciate this option as there are some really tough stages that made my progression come to a halt.

Arcade Mode lets you play six battle modes similar to those of Challenge, with the biggest change being the absence of an objective, meaning that you can play as long as possible… or at least until you’re defeated. The six battle modes are Survival, Large Survival, Open Survival, Waves, Zones and Funtime. You can upgrade your ship with “$”, which you obtain by simply playing the mode.

The soundtrack is really good, and although I wouldn’t consider any of the tracks to be memorable per se, they’re quite enjoyable to listen to while playing. It’s an original soundtrack composed of electronic tracks that fit nicely with the gameplay.

Performance is solid, even when the screen is full of powerups and enemies. Frame rate is mostly consistent and there weren’t any noticeable hiccups. Load times are generally fast, it never took more than a few seconds to load a level.

Visuals are a double-edged sword. On one hand, the neon colors and simplistic esthetic and design look fantastic. But on the contrary, it’s riddled with various issues that ruin the enjoyment of the playthrough. The absurd amount of particle effects, like sparks that show up every time you destroy an enemy, become a distracting and infuriating annoyance.

Another glaring issue are enemy designs, which look far too similar to one another, and it’s hard to differentiate the smaller ones with that of a multiplier collectible. The background is themed to look like a galaxy, with stars scattered throughout. These small white dots, in conjunction with sparks and other particle effects, become a huge distraction. Bullets mesh with enemy attacks.

Overall, it’s confusing figuring out what’s what and who’s who. I took unnecessary amount of damage due to these visual problems, and an option to deactivate the particle effects and make the background plain black would’ve gone a long way to make the overall experience a hundred times more enjoyable.

Two annoyances other than visuals are the frequent spawn of enemies on top of the player, and the small window of invincibility after an enemy hits you, which makes it possible to get hit multiple times when cornered.

Controls are tight and responsive, and because of that, the movement is fluid and precise. My only complaint with the button layout was when switching colors since it became difficult to reach these while simultaneously controlling both analog sticks.

Though single-player is fine, I personally think the introduction of multiplayer would’ve made the experience a lot more enjoyable. #Funtime plays similar to Aperion Cyberstorm (twin-stick bullet-hell by aPriori Digital) and Just Shapes and Beats (bullet-hell title by Berzerk Studio), and those titles were a blast to play with two or more players.

Though not the best twin-stick shooter on the Nintendo Switch, if you enjoy the genre, then #Funtime is sure to be a fun time.