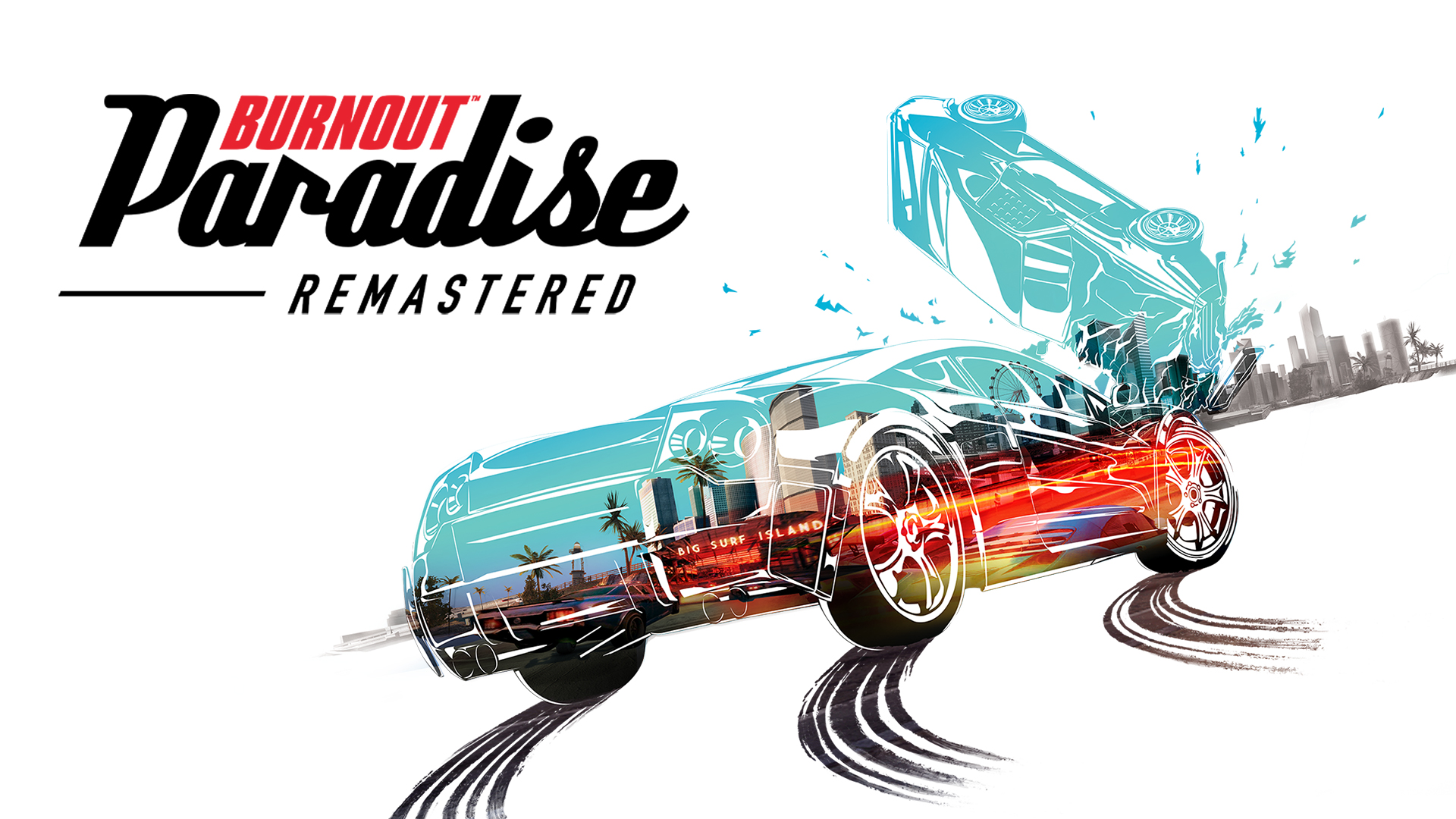 Burnout Paradise was first released back in 2008 for the PS3 and Xbox 360 and PC. This was also the first game in the Burnout series to be released on Microsoft platform. This title received great reviews upon release, averaging about an 80 across the board. The open-world gameplay was also highly praised. It was listed among Greatest hits and received several “Best Driving Game” awards.

Burnout Paradise Remastered is a racing sim, so there’s not much of an actual story. You start out with a low-class driver’s license and as you rack up wins your license upgrades to eventually an elite license. As you progress throughout the game, you can unlock a wide variety of styles of cars. Muscle cars, Japanese tuners, motorcycles, SUV’s, and my favorite, the Vegas, a car Snoop Dogg would proud to roll around town in.

The setting is the fictional world of Paradise City (yes, you will hear Guns n’ Roses hit song ad nauseum..) and the narrator that guides you through tutorials is DJ Atomika who chimes in every so often to give you tips or if you start an event for the first time, he will walk you through what you are supposed to do. If you lose a race, he chastises you, and honestly, his sarcasm made me throw my controller a time or two.

Burnout Paradise Remastered’s gameplay is the meat and potatoes of this title. Burnout is known for its Crash system and this title is no stranger. The crashes themselves are pretty brutal and at times I cringed thinking about how that would look in reality. The speeds you can reach really test your reflexes and one wrong turn or one look away for 2 seconds and your momentum halts immediately, leaving you to watch your car roll across the street and other racers pass you by. The challenge alone is what kept me playing. There have even been academic studies on this game’s reflex testing, gamer cardiology, and computer game pedagogy.

As stated before, as you progress your license levels, you can unlock variety of cars. There are also a nice variety of race modes if you get tired of wreaking havoc in Paradise City. This game includes your basic race mode where you have a start and a finish, and it is up to you to find your way to the finish! Road rage is a fan favorite. You force your opponents into the side rail or make them crash until you reach the time limit. You get a point for every car you take down.

Stunt mode is akin to Tony Hawk’s Pro Skater, in that you have a time limit and you must rack up points by performing jumps and stunts until your time is up! Marked Man mode is a survival race. There is no time limit, only the life of your car. Virtually indestructible enemy vehicles will try to run you off the road. Do not underestimate them. You can take them down, but they will continue to hunt you until you reach the finish. It is highly recommended to find repair stations during this race!

Throughout Paradise City, there are repair shops where your car is instantly repaired after taking multitudes of hits. There are paint shops to update your cars looks. There are junkyards where you can change out which car you want to take for a spin. The game contains 400 caution signs to destroy, 120 billboards to take down, 15 super mega jumps, 75 smashes and a plethora of other things to do!

One of my favorite features is “showtime” which can be activated at any time. You crash into a car, activate showtime and then your car bounces as you keep your boost in check. As you crash into more cars, you score more points and the goal is to beat whoever has the most points from online play. This is probably the most addicting part of the game.

It’s very satisfying watching your car bounce from car to car and even to busses and score bonus points, as well as racking up the cost of damage. Also, the damage system has a couple of features. If you crash and can land on all four tires, pending that it isn’t a completely destructive crash, you can do what’s called a “driveaway” Otherwise, you just sit there and think about what you did as your car rolls across the street in a jumbled mess.

The controls for this game are very tight and you can feel the difference in style from all the different cars. Each vehicle type handles differently. The boosts and speeds you achieve are very satisfying as you fly through Paradise City. Braking and drifting are well acclimated and there are a variety of approaches depending on the type of car you choose.

Takedowns and crashes are pretty realistic. There is no speedometer, so you don’t quite know just HOW fast you are going, but like real life, all it takes is one tap and you’re taken down if you’re going fast enough. Taking down other racers is very satisfying. In contrast, getting taken down is very frustrating, which makes me want to get even better at racing in this game.

Burnout Paradise Remastered launched with all DLC from the original release, except for the “Time Saver” DLC which unlocks everything automatically without grinding through the game. The extra content included includes a variety of styles of vehicles and motorcycles and the Big Surf Island level. Big Surf Island is an extra world to explore with more races and games to add to Paradise City’s vast array of activities.

The multiplayer in Burnout Paradise Remastered is pretty smooth. All you do is turn on Paradise City Live and you can invite someone to your join game online. There are leaderboards to conquer both online and offline. Freeburn is a fun mode where you scream across town to beat road times from your online friends. Jumping into a quick match is painless and you are challenged to show off your Burnout skills against online leaderboards and your friends. Online modes can open up different stunt challenges and races and overall, it’s a very fun multiplayer mode.

As with many racing games, the soundtrack is often the best part. Burnout Paradise Remastered’s soundtrack features an eclectic mix of metal, rock, and EDM. It’s easy to get lost and therapeutically just drive and listen to the soundtrack, featuring artists like LCD Soundsystem, Guns N Roses, Killswitch Engage, Junkie XL, Twisted Sister, and Alice in Chains among many others.

If you prefer the roar of the engine, then turn down the music and listen to the sounds of your car or the crashes. The audio in Burnout Paradise Remastered is very well produced and the shift changes in some cars, like the Japanese style tuners, is a very satisfying sound. The silence that happens after you crash is deafening at times as just like a real-life crash, everything just halts as you contemplate what happened.

DJ Atomika’s voice is not overbearing, although it can be a little annoying at times, especially when you lose. You can turn hints off in the options menu if you get tired of hearing him give you tips on what to do. Sometimes, you just want to drive and vibe with the music and enjoy the freedom of an open-world driving game.

The graphics for this remastered version of Burnout Paradise Remastered are nicely polished. Handheld mode is not bad and runs smoothly at a possible 30 fps. In docked, the graphics are just as nice. The sun shining off the smooth paint of a freshly repaired car is very aesthetically pleasing. The world design is very well done and includes a plethora of hidden areas and places to jump off.

Burnout Paradise Remastered is one of the nicer looking racing games available for the Switch. The performance for a game as demanding as this is very impressive. Speeding through Paradise City, I encountered no tears, no glitches, or any graphic drops. When I switch the handheld, there was a slight drop in framerates, but it cleared back up after a few seconds. This game performs pretty well on the Switch.

As a gamer growing up, I loved my GameCube. I played the mess out of Need for Speed Underground. I’m extremely happy to see a racing title like Burnout Paradise Remastered be available for the Nintendo Switch. Honestly, since the launch of the system I’ve been waiting for a mainstream racing title that wasn’t Mario Kart to finally make it’s way to the Switch.

That’s not to say that there aren’t any good racing games available, this title just shows that EA is finally allowing a great racing title to be successful on the Switch and I hope that there will be more titles like this in the future. Please EA, give us Need For Speed Underground 1 and 2 Remastered…my 8th-grade self will thank you!

The grinding races can be a little tedious at times, but there’s plenty to do to break away from the monotony of racing to the same three or four locations to level up your license. The cars available have enough personality and variety to keep things interesting and the soundtrack, while short, is a great mixture of genres to keep your ears happy while you take down your opponents.

My only complaint with Burnout Paradise Remastered is the lack of challenge at times, but as you progress, things do get a little hairy and you need to think fast. Your reflexes will be tested and make sure to blink if you play for too long. This is not a perfect game, but it is a great casual arcade racer that I hope will shine a light to a future of more mainstream racers coming to the Switch in the future.

Burnout Paradise Remastered is a great racing game for the Switch. It’s perfect in its casual arcade nature and it’s just a fun game to waste some time with.