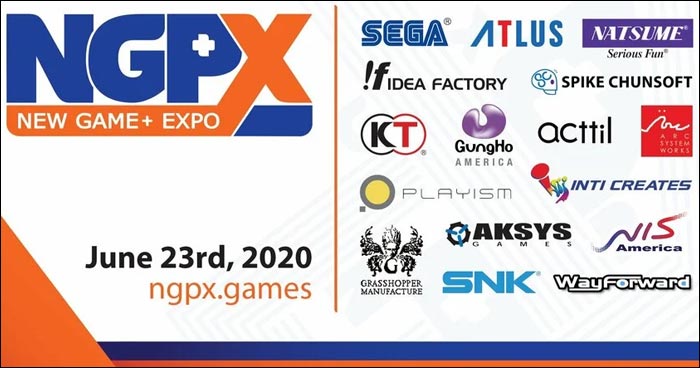 Nintendo Switch Highlights from the New Game Plus Expo 2020 Conference!

In its first year since it was announced, New Game Plus Expo followed in Nintendo’s footsteps with a very Nintendo Direct style presentation of upcoming games from various developers and companies, featuring SNK, Aksys, Nis America, Atlus, Arc System Works, Natsume, Spike Chunsoft, WayForward and a variety of indie developers.

We’re gonna run down the games that will be releasing on the Switch this year and in the future. Let’s get into some exciting game reveals!

Today’s presentation opens with a new trailer for Catherine: Full Body from Atlus. This challenging puzzle, decision-making sim will arrive on the Switch on July 7, 2020. Check out the trailer below!

Our next reveal trailer was for Harvest Moon: One World, from  Natsume. Not much information was discussed but the gameplay footage was quite beautiful, even if it’s still in development. The soundtrack is absolutely beautiful and orchestral. Think Animal Crossing with actual farming mechanics. This game will launch in Fall of 2020.

Our next reveal from the New Game Plus Expo comes from Aksys Studios titled Tin and Kuna. This quirky puzzle platforming title had cooperative elements, beautiful graphics and an interesting approach to the platforming genre as a sort of pinball. Check out the quick trailer below!

If you’re getting tired of playing Mario Party and hating your friends and family, look forward to the same approach but with quirky anime characters! From Bandai Namco, Billion Road scratches that traditional board game style minigame party we’re used to from our favorite red-hatted plumber and friends. This title is available now! Check out the trailer below!

And now my favorite title of the entire presentation. From Playism,

THAT IS ALL YOU NEED TO KNOW.

The next big reveal from NGPX featured the newest DLC Character from Samurai Showdown. For Honor’s Warden! He is the final DLC Character in DLC Pass 2. He will be available June 24, 2020. Check out the trailer below!

Re:ZERO – The Prophecy of the Throne

The next trailer introduces Spike Chunsoft’s Re:ZERO – Starting life in Another World: The Prophecy of the Throne. The story summary from their trailer reads: One month after Subaru’s new life in another world began, an emissary sent by the royal castle suddenly appears with news that the royal selection has been postponed, but offers no reason as to why.

The postponement of this grand event that decides the next ruler of the kingdom of Lugunica stirs Subaru and his friends into action. They return to the royal capital only to find that a sixth candidate has claimed their stake for the throne. But the Dragon Stone prophesies that only five candidates would be chosen. With one candidate being an impostor, suspicions are immediately cast toward one woman in particular” Emilia. What answers lie beyond the mysterious web of assassinations, betrayal, and conspiracies….? Check out the teaser trailer below! (source: Spike-chunsoft.com/games/rezero/ )

Fallen Legion Revenants is a sequel to Fallen Legion: Sins of an Empire and Fallen Legion Flames of Rebellion. This title features Lucien and Rowena as they attempt to “dethrone a tyrannical prison warden.” From NIS America, and developer YummyYummyTummy, Check out the trailer reveal below!

For those into romance, visual novels, and supernatural beings with a side dish of headless knights, Aksys Games new title, Cafe’ Enchante’ will be your guilty pleasure! Check out the trailer below! The cafe will open for business in Fall of 2020.

Bloodstained: Curse of the Moon 2

A much sought after 8-bit sequel to the spinoff, Bloodstained: Curse of the Moon 2 features new characters and new levels and demons to face! Zangetsu, Dominique, Hachi, and Robert will help us eradicate all the demons in our path! check out the trailer below!

To continue the Switch’s support of all things anime, Fairy Tail is bringing it’s nonstop action and glorious graphics to the switch! Featuring RPG elements, this action-adventure RPG allows you to create your own team, power up your abilities, and customize your characters with exclusive content!

Fairy Tail will launch July 31, 2020. Check out the action-packed trailer below!

This collection will feature online multiplayer using any character from any game! The collection is also loaded with special bonus features. Check out this trip down samurai memory lane digitally July 28, physically later in the summer!

From Aksys Games, Piofiore: Fated Memories tells the story of three criminal organizations fighting for control from a lonely city and Lilly is at the center of the turf war! Check out this riveting story in Fall of 2020!

If you’ve ever wanted to be a princess, now is your chance with Pretty Princess Party! Full of minigames and dress up, this fanciful, incredibly cute princess sim is sure to make your daughter or wife smile as they live out their dream of being a princess!

Shiren the Wanderer: The Tower of Fortune and the Dice of Fate

Shiren the Wanderer is back in an old school, top-down adventure game from  Spike Chunsoft. The retro-style graphics are gorgeous. The game also seems to be unrelenting in challenge. The dungeons change every time you play and if you die, you lose everything.

Don’t be scared, you can request your friend to revive you if you are online! Check out more info in the trailer below!

To cap off a fantastic series of trailers, Falcom is bringing the much anticipated next title in the Ys series, Ys IX, Monstrum Nox. The graphics and battle system looks improved based on the teaser trailer below. We look forward to providing you with more info on this title as more comes available! Ys IX will launch in 2021.

Overall, the New Game Plus Expo presentation of demos and trailers really whet our thirst for Nintendo games since we’ve yet to see an official Nintendo Direct. New Game Plus certainly borrowed Nintendo’s formula and kept the trailers coming! I, for one, am excited for all these different titles to drop, even if my wallet is not.

We all look forward to more reveals and more positive things in life during all this turmoil we’ve been dealt with all year. Games have a way of bringing us all together, and it doesn’t seem like that passion for gaming is ever going to go away, even in the midst of a pandemic!