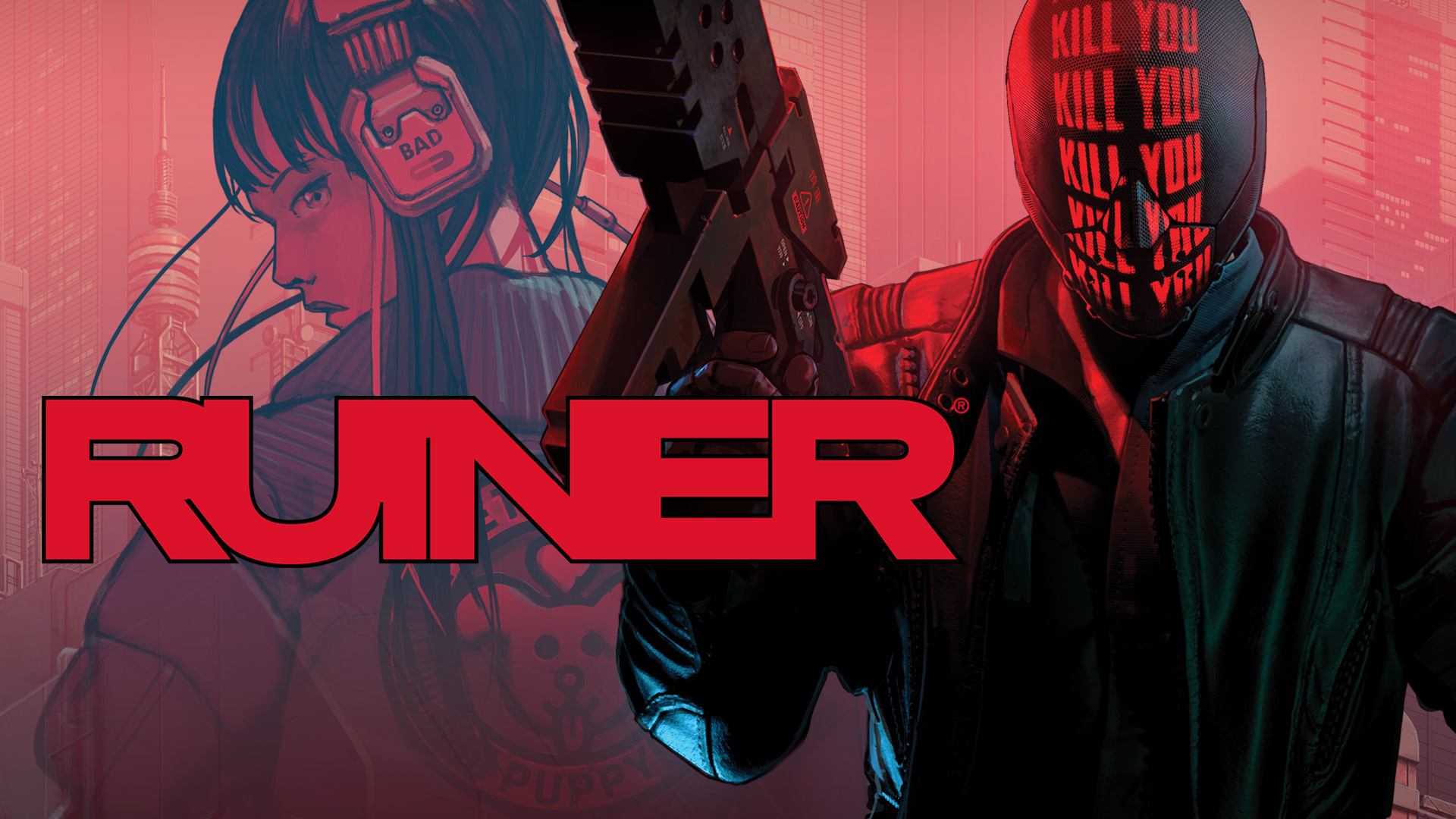 RUINER was first released on PS4, Xbox One, Microsoft Windows, and Linux back in 2017. Reikon Games, a video game developer in Poland developed the game and Devolver Digital handled the publishing. The game received generally favorable reviews at the time and now has another chance to shine again, this time on Nintendo Switch.

RUINER is set in the fictional Cyberpunk city of Rengkok in 2019, an unnamed masked man has had his brain hacked and is programmed to kill the Boss of a company called HEAVEN. Fighting through hordes of enemies in some kind of facility, the masked man reaches the door to the Boss. Upon touching the door. The masked man receives an electric shock and it knocks him to the floor. The man escapes the facility with a cracked mask and missing an arm. He somehow makes his way onto the city of Rengkok but ultimately collapses in the street.

A tinkerer finds the masked man and helps fix his mask and gives him a new arm. The reason for his help was that a woman called HER told him to. HER tells the masked man that his brain was hacked and that his brother has been kidnapped. She goes on to say that in order to find the brother, the masked man will have to track down the man who hacked his brain in the first place.

By asking around, the masked man who is now referred to a Puppy by HER, learns the location of the Hacker called WIZARD. He is hiding under the protection of a local gang called Creeps. Puppy heads out to the location that turns out to be a garage where the Creeps have set up their hideout. Making short work of the gang member, Puppy is confronted by their leader Nerve. After a duel between the two, Puppy kills Nerve and the gang members declare him their new leader. Puppy then goes after WIZARD to hack his brain and find out where his brother is.

It is certainly an interesting storyline set in a futuristic cyberpunk world. The premise of hacking into someone’s brain is terrifying yet intriguing at the same time. I suppose hypnotism is probably the closest thing we have in this common age. Still, I would dread what anyone would find in my brain. I find that the story itself wouldn’t feel amiss as an anime and one that I would certainly find myself watching.

RUINER is an isometric, top-down twin-stick shooter/slasher in which you must lay waste to hordes of enemies in your path. The left joystick controls direction whilst the right joystick controls the angle in where your character looks. Melee (R) and ranged (ZR) weapons can be used to fight enemies. There are plenty of weapons to get your hands on though you can only have one of each at any one time. Ranged weapons like firearms have limited ammo and are discarded after use. Similar can be said for Melee weapons but have limited durability rather than ammo.

Each level is broken into several stages. You are scored on how well you do in each stage. The levels consist of paths and open areas. The open areas are where you will fight large groups of enemies and the paths connect between one open area to the next. The enemies can have all sorts of weapons and can drop them when defeated. Staying on the move is important to avoid being gunned down. Should you die, you will respawn shortly before the area where you died.

To give you an edge in combat, when you level up, you can earn skill points to unlock multiple skills. These include the likes of dash, shield, grenades, and health increase. Each skill has the ability to become stronger, last longer, etc. When you defeat enemies, they drop data chips called Karma. It acts as EXP and when you have collected enough, you will level up. Leveling up will then reward you with more skill points to spend. Karma can also be found in boxes that are scattered over each level.

After making a huge mess of enemies and there are plenty of weapons lying around, recycling bots will come along. If you interact with them, they will collect all the available weapons and grind them into Karma. They can also leave a more powerful weapon behind as well. Always try to take advantage when you can as good weapons with plenty of ammo can make all the difference.

There are 16 levels in total (including the Tutorial). On some levels, you will be able to walk around Rengkok city to take on side quests like headhunting (killing certain bad guys) or performing other tasks. There really isn’t much else that can be in the city. It seems like a missed opportunity when it looks quite like an interesting place to explore.

RUINER has three difficulty modes to choose from and a New Game+ that is unlockable after beating the game. The difficulty can be chosen when you start a new game. You also have the option to raise or lower the difficulty on the main menu. Should you find yourself on a particularly difficult stage, you can lower the difficulty to overcome the challenge. Bear in mind that you will only be scored on the lower difficulty from that point onward.

There are two other game modes available for those looking to expand their experience with the game. These modes are Speedrun and Arena. Speedrun mode has you play through the game as quickly as possible without cutscenes or dialogue. The Arena is a coliseum mode where you must fight through waves upon waves of enemies. You can unlock outfits for your character depending on how well you play in each mode. The arena is particularly tough as the difficulty is set to Hard. If you are looking for a challenge, here is where you will find it.

A nice little feature is that some doors and boxes require hacking to open them. To hack them, you have to press the X, Y, B, A buttons in the sequence shown on the screen. I find that it is not particularly difficult and there is plenty of time to input the sequence correctly. Boxes that can be hacked usually have some powerful weapons inside that can be quite useful in a fight.

As you beat each level in the game, you will be able to replay them in Level Select. By choosing to play a level, it will make you lose progress in whatever level you are playing so far. Be sure to beat a level before playing a new one. You can also change the difficulty to make it tougher or easier like you can in the main game.

The music for RUINER reminds me a lot of Ghost in the shell and even Astral Chain (though technically RUINER came out first) with its pulsating and energetic electro-pop tracks. It certainly matches the vibes and the setting of the game but the lack of variety does make it feel a touch repetitive at times.

The sound effects are fine, nothing totally “wowing” but they do their job. The lack of voice acting is also a shame. I feel it would have given the characters more personality to make them more engaging. There are some truly cool cutscenes and plenty of written dialogue between characters. Voice acting would have complimented both but alas, it is not meant to be.

For a game that was “dumbed-down” for Nintendo Switch, RUINER does look very good on the console. The visuals are clear and pretty much anything that you can pick up and use has a highlighted marker around it to make them more visible. Objects and people that you can interact with are indicated with a little red triangle marker. With so much happening on the screen, these little markers can be quite useful.

Performance is reasonably solid, especially in handheld mode. There is a slight downgrade in docked mode for some reason (though you would think it would be the other way around). Not so much in regards to resolution but frame rate. To be fair, the frame rate is quite sound all the way through but it can judder when the screen gets really busy (like when fighting the boss). The particle effects can also be confusing at times as you can lose track of where you are amidst the gunfire.

There isn’t much more to RUINER except that being a relatively short game, you can replay through the game to improve your score or indulge in the other game modes. That can get repetitive though as mercilessly killing hordes of enemies can lose its entertainment factor.

More emphasis on exploration would also have been nice. Rengkok City has the looks of a bustling city. It shows that the developers have put plenty of effort into it to make it as detailed as possible. However, you can only visit it on certain levels. You can learn more about the City by reading the Database. I feel that the game could have felt more immersive if you could learn about the city and the people from the NPC’s that live in it.

The movie cutscenes also look incredible. I would have loved them to have been a bit longer and had some dialogue with them. Still, it is a game after all and the idea is to play it, not watch it. Saying that, I would certainly watch an animated TV with this game’s visual style.

RUINER is chaotic fun mixed with plenty of challenge for those that seek it. It is definitely a game for those that love Cyberpunk and Twin-Stick shooters that are full of action and wanton violence.