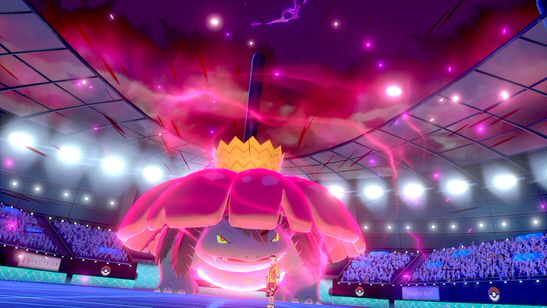 Thus, welcome back to “Who’s That Pokémon?” and this time, we’re tackling the Gigantamax Venusaur:

Description: The power of Gigantamaxing has made Venusaur’s flower bloom so large that it covers the Pokémon’s body. The flower’s petals are extremely thick and springy enough to repel halfhearted attacks. During battle, the Pokémon uses these petals as a shield and swings its two thick vines around to attack its target.

The flower on the Pokémon’s back spews so much pollen that it resembles a volcanic eruption. Inhaling the pollen can cause uncontrollable sneezing, and breathing in too much of it can even cause fainting. However, the pollen also stimulates plant growth. Places where the pollen falls are said to grow thick with large plants.

G-Max Vine Lash doesn’t just deal damage to an opponent when it hits—it will continue to deal damage for four turns to any Pokémon that isn’t Grass type!