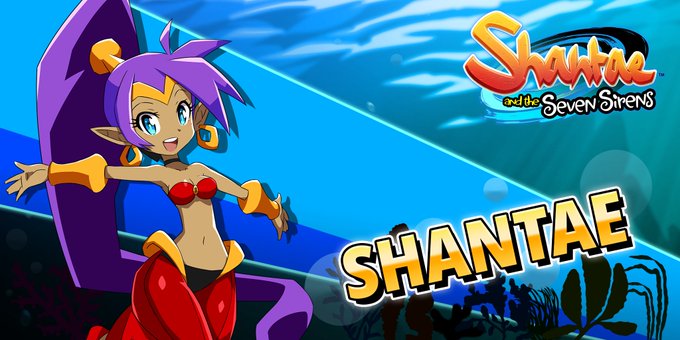 With less than one month to go before the Nintendo Switch release of Shantae and the Seven Sirens, on May 28, 2020, developer WayForward has steadily begun releasing information on a few characters appearing in the game, across a series of tweets.

With nothing but love for the series, we have gathered together the information so you can read the whole thing, in one place, at your own leisure, enjoy:

Shantae, the heroic belly-dancing, shape-shifting Half-Genie, has saved Sequin Land multiple times, and she’s ready for a tropical vacation! Instead she finds an all-new adventure full of mystery and intrigue in Shantae and the Seven Sirens, coming to consoles and PC on May 28!

Just who are the Seven Sirens? We don’t want to reveal everything yet, but the first one you’ll meet is the Water Lily Siren, who uses the power of prickly plants to punish her prey.

In Shantae and the Seven Sirens, our heroine encounters other Half-Genies – the offspring of a genie mother and a human father – for the first time. The eldest is Harmony, who, like a big sister, is quick to promote cooperation and offer words of encouragement.

Bolo isn’t the sharpest blade in the arsenal, but Shantae knows he’s a true friend to the end. He joins his longtime ally on her tropical getaway in Shantae and the #SevenSirens, and while he hopes to meet the local ladies, he’s more likely to get acquainted with the fluke worms.

One of the Half-Genies you’ll encounter in Shantae and the #SevenSirens, Plink is a seer with the ability to observe the invisible world around her. Despite her youthful appearance, she knows a lot about magic, and is happy to share that knowledge with Shantae.

Shantae’s bestie, Sky, has also made the trip in Shantae and the #SevenSirens! Despite the strange happenings on the island, Sky is determined to not let them interfere with her vacay plans – namely working on her tan and sipping lemonade while Wrench perches nearby.

Wearing an armored pressure suit, the Coral Siren is another of the mysterious foes you’ll face in Shantae and the #SevenSirens. Instead of relying on innate abilities, this Siren uses tools and machinery to battle anyone foolish enough to visit her lair in the Coral Mines.

Half-Genie Vera is a native of Paradise Island in Shantae and the #SevenSirens. The daughter of the chief of Tree Town, she can use Refresh Magic to revitalize things and heal people. You can meet her when the game launches on console and PC on May 28!

Risky Boots, the nefarious lady pirate, is back in Shantae and the #SevenSirens! She’s up to her old tricks again, giving Shantae trouble while seeking absolute power. What exactly does she have planned? Find out when the game hits console and PC this Thursday, May 28!

Residing in the Sea Vent Lab, the terrifying Tube Worm Siren strikes at her prey from all directions, but there’s much more to this villain than initially meets the eye! Face her in Shantae and the Seven Sirens, available now!

With a dry sense of humor and the ability to manipulate electricity, Zapple is the most energizing of the Half-Genies introduced in Shantae and the Seven Sirens (out now!). Though she’s often skeptical, she’s a loyal ally to those who win her over.

Even Uncle Mimic has joined Shantae on her tropical getaway in Shantae and the #SevenSirens. Unlike the others in her entourage, Mimic isn’t interested in relaxing – he wants to discover the secrets of the ancient ruins hidden beneath the island’s surface!

As for the setting of this brand new adventure, WayForward has offered the following:

The new Paradise Island setting in Shantae and the Seven Sirens draws in the tourists with its sun, surf, and spectacular Half-Genie Festival. Beneath the island’s surface, however, is an ancient sunken city concealing sinister secrets. What will Shantae discover?!

We hope you’re every bit as excited about this upcoming release as we are!

Speaking of being excited about the new Shantae game, here’s a lovely art piece by @EnigmaticAces: