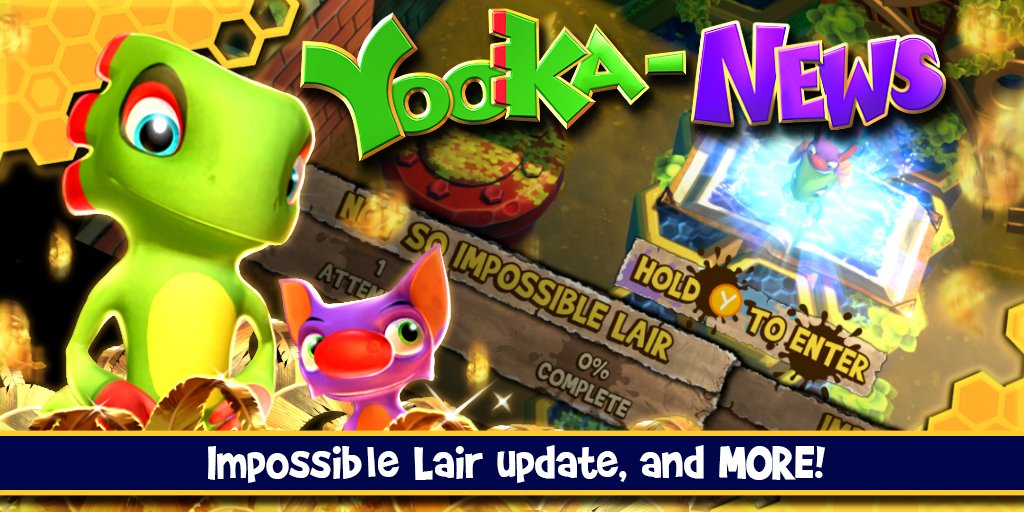 The Impossible Lair option will now allow players to unlock the Golden Try Tonic without the need for a new save file. A new 8-bit soundtrack for all background music on the 2D levels will be made available in the new update as well. This cool chiptune soundtrack was created by Tater-Tot-Tunes.

You can read the full announcement below as well as an upcoming 64-bit Tonic update for Yooka-Laylee on PS4 and Xbox One.

YOOKA-LAYLEE AND THE IMPOSSIBLE LAIR

Flip the switch and choose how you tackle the Impossible Lair!
Not So Impossible Lair
Each section now ends with a Checkpoint (Checkmates, technically). Checkpoints save your best “Bee Shield score”, meaning you can choose which sections to start from, practice and improve on! Using these checkpoints is entirely optional.

No Bee Shield, no Checkpoints! The “Golden Try” Tonic can now be earned this way – no new save file required.

The brilliant Tater-Tot Tunes has composed an entire 8-Bit Soundtrack covering every 2D level in the game. To access it, simply find it in the pause menu once the update is live. If Chiptune is your thing, you’re in for a real treat!

Once again, we’ve teamed up with Materia Collective! This time they’re bringing the 8-Bit version of the Yooka-Laylee and the Impossible Lair soundtrack, “Retro Remix”, to a music streaming service/store near you! Pre-Save the album on Spotify or Apple Music and have it ready to go for the 14th!

You can expect this update to hit your platform of choice on Tuesday the 14th of April.

Yooka-Laylee is turning 3 soon, so as a Birthday treat, we’re happy to reveal that the wait for the 64-Bit Tonic on PlayStation 4 and Xbox One is almost over. We expect it to be pushed out before April ends.

We heard your feedback on the initial version of the Tonic, so we’re adding the Yooka 64 model from Yooka-Laylee and the Impossible Lair to the Tonic as free DLC. This means the Steam and Switch versions of Yooka-Laylee will be updated to include it!

Once the update is live, have a chat with Vendi to activate the 64-Bit Tonic and relive the good old days with the downgrade of your dreams!

From the 9th-19th April, if you own Yooka-Laylee on Switch, you can purchase Yooka-Laylee and the Impossible Lair for a whopping 50% off. Wahey!