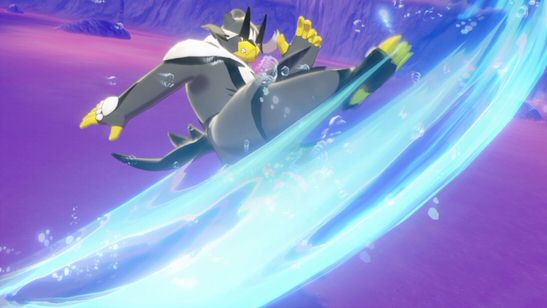 Just when you think you’ve seen all Pokémon Sword and Pokémon Shield, have to offer, GAME FREAK reveal even more Pokémon for Galar and one of them is available now! So join us for another “Who’s That Pokémon?” and this time, we’re tackling the Wushu Pokémon Urshifu (Rapid Strike Style).

Kubfu will evolve into Urshifu after it has undergone sufficient training. It seems that Urshifu has two forms—a Single Strike Style and a Rapid Strike Style—and it appears that each form has different types as well.

Description: Urshifu in this form maintain a calm demeanor, observing their opponents and measuring their strength while dodging attacks. A Rapid Strike Style Urshifu will use flowing movements in battle to smoothly parry an opponent’s moves and then overwhelm the opponent with a flurry of rapid strikes.

Signature Move: An Urshifu that has followed the path of water can unleash this flowing three-hit combo. This move always results in critical hits, allowing Urshifu to attack while ignoring the target’s stat changes.

This Ability lets the Pokémon deal damage when it attacks with moves that make direct contact, even if the target defends itself by using moves like Protect.