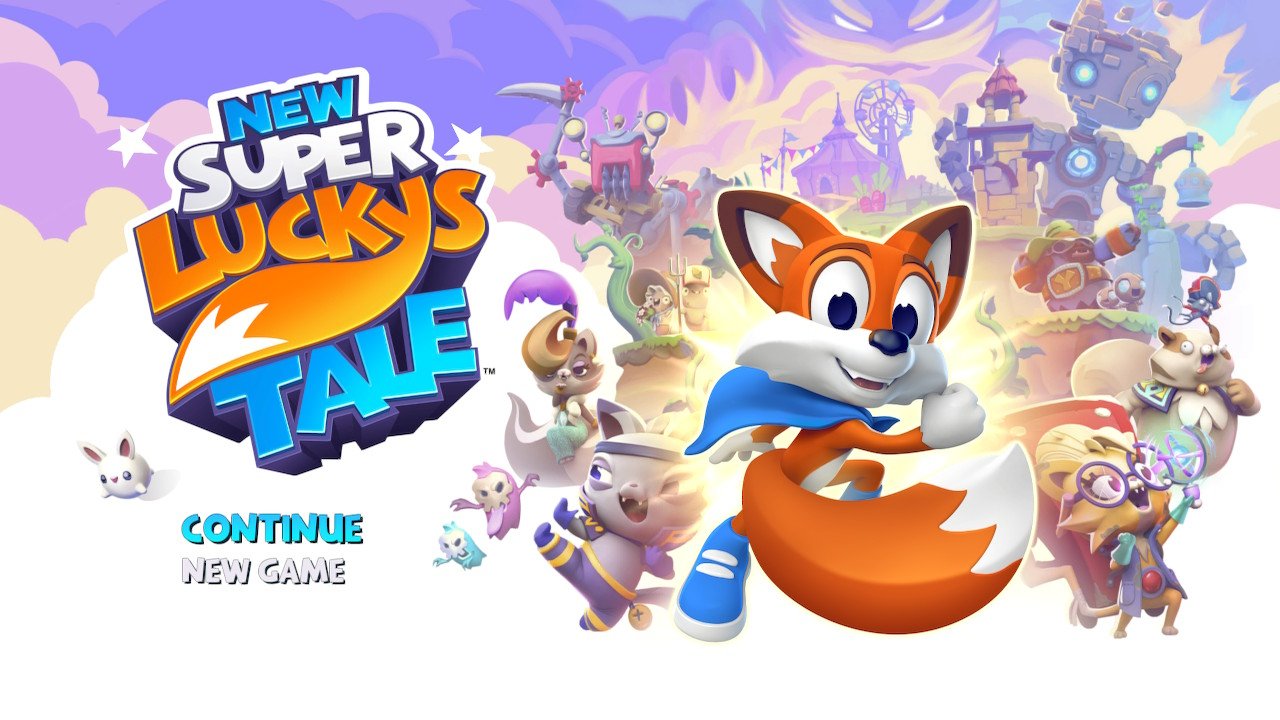 In 2017, A Sequel to the Occulus Rift VR 3D platformer Lucky’s Tale, was published by Microsoft Studios for Windows 10 and Xbox One. It was titled Super Lucky’s Tale and was a launch title for the Xbox One X in November 2017. In 2018, it became part of the Xbox Game Pass. It received mixed reviews from critics but was generally adored by the players.

The game has since been given a new lease of life for the Nintendo Switch and was announced for the console during the E3 2019 Nintendo Direct Presentation, where it was also given the revamped title of New Super Lucky’s Tale. The Nintendo Switch version includes all the base content and DLC of the original game.

New Super Lucky’s Tale follows the Lucky the Fox, who has been separated from his older sister and friends after being chased by a gang called the Kitty Litter. The Nefarious felines are lead by Jinx, a Guardian turned bad and is after the book Lucky’s Sister Lyra was protecting. The book is known as the Book Of Ages and contains entire worlds within its pages.

Lucky was warped to another world, along with the Book Of Ages, to escape the grasp of Jinx and the Kitty Litter. Lucky, though young, is brimming with optimism and confidence that he will be able to find all the pages that have escaped the bindings of the Book of Ages and will be reunited with his sister.

The story serves its purpose in the way that it gives a general premise as to what is going on and why Lucky must go through each level in order to find pages. Each world that Lucky visits is home to its own array of characters that have their own issues and problems with the invading Kitty Litter. By helping them out, Lucky manages to find more pages that will allow him to achieve his goal of reuniting with his sister.

New Super Lucky’s Tale is a 3D platformer inspired by the likes of Super Mario 64, Banjo-Kazooie and Crash Bandicoot. Players have to traverse through multiple levels looking for pages to collect, as well as other collectibles like Letters that spell out L-U-C-K-Y and coins that can be used to purchase outfits. Collecting 300 coins on each level also awards players with another page for the Book of Ages.

Players can run, jump and burrow their way through each of the game’s levels. Each world can have several different types of layout. Some are full, open 3D worlds to explore freely. Other levels are 2D side-scrolling that can consist of auto-run or be freely explored as well. They also have hidden areas in the background that the player can find letters, gems or hidden pages.

Not every object that Lucky comes across is floating above ground within reach. Other times, it can be partially buried in the ground. Lucky can still collect these by burrowing under the ground after them by holding the ZR button. IT must be said that Not all ground can be burrowed into and attempting to press ZR on such surfaces will cause Lucky to skid across them instead.

Being a platformer, there are plenty of platforms to jump onto. Lucky has the ability to double jump in the air and can use the tail swipe attack to gain an extra few milliseconds whilst suspended in midair. As well as platforms, there are also many obstacles like fireballs and spike pillars to avoid.

As regards to enemies, most of them can be dispatched with a whack from your tail or by burrowing underneath them and jumping out of the ground. If enemies are dazed, you can automatically kick them by walking up to them. Some can even be jumped on from above, Super Mario style.

Bear in mind, there are a few enemies that have the means to defend themselves like the Garlic enemies or armored enemies. Knowing what attacks work on which enemies will help minimize making unnecessary mistakes.

As well as the individual levels, each world has its own hub that can be explored as well and provides doorways to its associated levels. You can talk with the resident NPC’s of the world here as well as use Geovanni’ Shop or find hidden minigames.

At Geovanni’s shop, you can purchase outfits that have been unlocked after reaching that world or collecting all the available pages in that world. Each item of clothing costs 700 coins with outfits and headwear being separate items, similar to that in Super Mario Odyssey.

As regards to minigames, there are a couple for players to indulge in. These consist of puzzles to stimulate the old Grey Matter and come in the form of moving statues around to their proper places. Another minigame tests your responses as Lucky rolls around in a ball, collecting all the coins in the stage without falling off the ledge or coming into contact with spikes.

The Loading screen between worlds and levels (or dying), contains some trivia about the game and can provide useful hints or light-hearted jokes about the characters you have met or will meet. It helps alleviate to alleviate the mood whilst waiting for levels to load though you may see the same prompt a few times during your playthrough.

The soundtrack for New Super Lucky’s Tale is upbeat and charming. It is reminiscent of typical 90’s platformers and is in keeping with its cutesy charm. Each of the worlds has its own music track to fit their theme; Countryside, Beach, spooky, etc. they do well to capture the essence of each level and are enjoyable to listen to.

The sound effects are nicely done and well-executed. In some games that I have played, some sound effects can be a little off-cue but fortunately, it is not the case with this game. Full voice acting or gobbledygook speak is not featured but it seems to be a mixture of the two. I did find it a little awkward as my brain would pick up random words that didn’t really make sense. It is an interesting take but it’s not something that I would hope becomes a staple in modern games.

New Super Lucky’s Tale is a bright and colorful game. Its cartoon aesthetic is family-friendly and looks really good on Nintendo Switch, both in handheld and docked. The visuals are well polished and the text is very clean and easily readable.

I found the performance to be actually quite stable. There a few frame skips at times during Level intro cut-scenes but that might just be from slight choppiness between transitions. As to actual gameplay performance issues, I never experienced anything game-breaking but I did witness frame skips on some of the levels, especially around tricky platforming sections.

New Super Lucky’s Tale is a very cutesy game and for that, it may not be for everyone. Its simple gameplay mechanics and level layouts can be easily beaten and completed 100% with ease by experienced players of platforming games.

However, this is not a game aimed at experienced players. Rather, it is for young players that might be looking for a game to help them get to grips with platforming games. Regardless, it is a delightful game to play for both young and casual players alike. It isn’t overly difficult, though it may seem to be on some occasions. Once you know the boss attacks patterns, they become much easier to take down.

Pretty much all levels can be played to 100% completion within a single run. There are no special moves or attacks to be learned so players aren’t restricted and forced to return to a level at a later date in order to beat them. This may deter some players as it limits the replayability of returning to previous levels to complete them.

Should players be looking for more challenge, the final world aims to give it to you. I won’t go into further detail in case you are looking to pick up the game and would like there to be some surprises.

New Super Lucky’s Tale is right at home on the Nintendo Switch. It is charming, platforming fun that is accessible for all ages. It may be a little on the short side in comparison to other 3D platformers on the console but there is still plenty of enjoyment to be had.