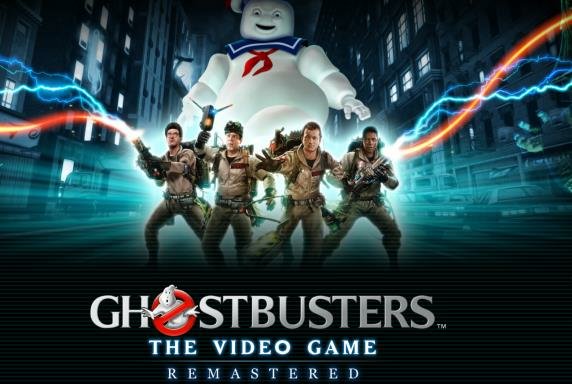 Ghostbusters: The Video Game originally released back in 2009 on Xbox and Playstation. There was a slightly altered version of the game released on the Playstation, PSP, and Wii as well, though it deviated from the other platform releases. The original release of the game was highly praised not only as a videogame, but also as a pseudo Ghostbuster 3 movie as it brought back the original cast and was well written. Now ten years later the game has been remastered with updated visuals and has released on all current generation consoles.

The story starts off as any good Ghostbusters tale goes, with a haunting in an old New York City landmark. You play as the newest recruit on the team after some basic tutorial introductions for your backpack and how to weaken and capture ghosts, you set off on your first mission. As you arrive at the Sedgewick Hotel, you meet a few NPCs that will alert you to the haunting and it’s your job to stop the ghostly happenings. The story sends the Ghostbuster team around New York City to a few locales, which translate into roughly seven main campaign story beats.

Ghostbusters: The Video Game Remastered will have you uncovering a hundred year old ghost story where a powerful being is attempting to merge the human world and ghost worlds together in New York City. The larger threat comes from three stations, which act as conduits for ghosts to enter our world. Walter Peck, a character you meet early in the game, is a member of the Paranormal Contract Oversight Committee or P-COC, pronounced Peacock. He is working alongside the mayor of New York to ensure his upcoming campaign isn’t ruined by the Ghostbusters and the inevitable destruction they bring to New York City as they battle ghosts. There are hilarious story moments that happen between members of the team, the mayor, and Walter, along with other side-characters you meet along the way.

The gameplay in Ghostbusters: The Video Game Remastered is broken up into three basic styles. The first is the investigative sections which typically starts off with you being sent to a certain place in the city where paranormal activity spikes are present and ghosts are causing disturbances. A cut-scene showcases the need for the Ghostbusters and then you need to scan the environment for clues as to what to do next. Often there are small puzzle-like areas of the game which has you flipping switches, opening up doors, etc. as you traipse through the environment.

While journeying through the levels, you will be tasked with weakening and trapping dozens of ghosts of various sizes and abilities. The ghosts can be scanned using your PKE meter, similarly to how Samus scans her environments and enemies to learn more about their weaknesses and history. Oftentimes, you will encounter low-level specters which only attempt to thwart you from moving through the levels and can usually be dispatched by blasting them.

The third gameplay type are the mini bosses and end level bosses which come in a variety of 1v4 matchups that sees your team of Ghostbusters trying to weaken and trap the poltergeist. From time to time, you may be sent through the level with a smaller team and encountering the mini bosses may mean smaller groups of Ghostbusters fighting together to bring an end to the haunting.

The boss battles are somewhat formulaic and usually consist of knowing your opponents weakness and timing your attacks during battle with openings. The fights remind me of Zelda boss battles in a lot of ways, where you need to use a certain item, or in this case, blaster type, and target a weak spot on the boss. Bosses will hurl items at you which you need to dodge or blast into oblivion before they hurt you. Sometimes you may need to revive other teammates as well if they are downed in battle, since restarting levels will happen if everyone falls in battle.

As it stands today Ghostbusters: The Video Game Remastered is a well put-together game that tells the, as of yet, untold third story in the movie/video game franchise. The game isn’t long, though it doesn’t overstay its welcome either in that the levels are concise and compact enough, yet long enough that it takes roughly eight to ten hours to complete. The completionist gamer will want to scan artifacts strewn throughout each level to 100% the game which will take you on some tangents within each of the campaigns you have ahead of you.

The game is supposed to eventually have multiplayer, but as of the time of my review, that is nowhere to be found and details on the possible integration and patch of the multiplayer are scarce. Right now, Ghostbusters: The Video Game Remastered features a great single-player story packed with missions that will be a treat to even the slightest of Ghostbuster movie fan.

If there is one area the game excels at, it is in the game’s overall audio presentation, through atmospheric and haunting music as well as voice acting. There were times when I was moving through the games several locales that I felt the eeriness as calming environmental music played just as it ramped up during a jump scare. One level that stood out to me had combined the squishy sound of spider nests as I moved through the hallways of a haunted hotel. The slosh of slime in one underground labyrinth of concrete and metal also stood out to me as a great sound affect to my ears.

Not enough can be said about the reprising of characters in their voice acting bits, which feature in the game’s cutscenes as well as various gameplay banter that happens while you are investigating levels or fighting enemies. From time to time your teammates will clue you into things you should be doing, or not doing, like when you cross energy streams with your blaster. The characters all sound great, though there were sometimes where the lines were delivered either too high or low and not necessarily as natural after a different person said something. I never played the original Ghostbusters game though I assume the issues were present in the original game as well.

Ghostbusters: The Video Game Remastered for Switch looks decent enough, though there were some areas of the game that had more of a muddied, low-grade look to them. Some textures didn’t seem as upgraded as they could be on the Switch and the general look of the backgrounds are not very detailed. The more confined areas of the game look decent enough and are filled with objects you can interact with and blast, though there isn’t much to gain from that other than using your blaster for fun.

I noticed a few areas of graphical hiccup pop up during my game time. One time I was in the midst of an in-engine scene where the team was interacting and talking with an NPC before we were able to move on. I started moving the camera and all the sudden Egon’s face popped into place replacing a black shadow that was once his head. It was funny and only there for a split second, but it’s little glitches like that that can be noticed from time to time.

In my nine hours of playtime, I never noticed any hitches in framerate while playing the game 99% docked on my 55” TV. The game looks decent enough on the big screen and since the UI can be somewhat cluttering to the screen having the extra space is a nice way to play. The other 1% of handheld time which was only a few minutes here and there seemed to work fine and without hitches as well.

If you haven’t played Ghostbusters: The Video Game before, the Switch port of the remastered version is a decent enough place to play it. You may get a sense of different visual fidelity on other systems, but if the Nintendo Switch is your go-to system you will not be disappointed.

The lack of multiplayer out of the gate is a bit of a downside for me as the game has a short campaign and playing alongside a friend or online would have stretched the game out a bit more for me. After beating the campaign there isn’t much of anything to go back and do, and that is a bit underwhelming. The game is priced at $29.99 USD, which is okay in my opinion with regards to the amount of time spent playing the game.

Ghostbusters: The Game Remastered is fun and enjoyable single-player game. There are some jump scares, but nothing too scary, so be warned. Get out there are Zap ‘em, Cap ‘em, and Trap ‘em.

*A digital code was provided by the publishers for the purpose of this review.