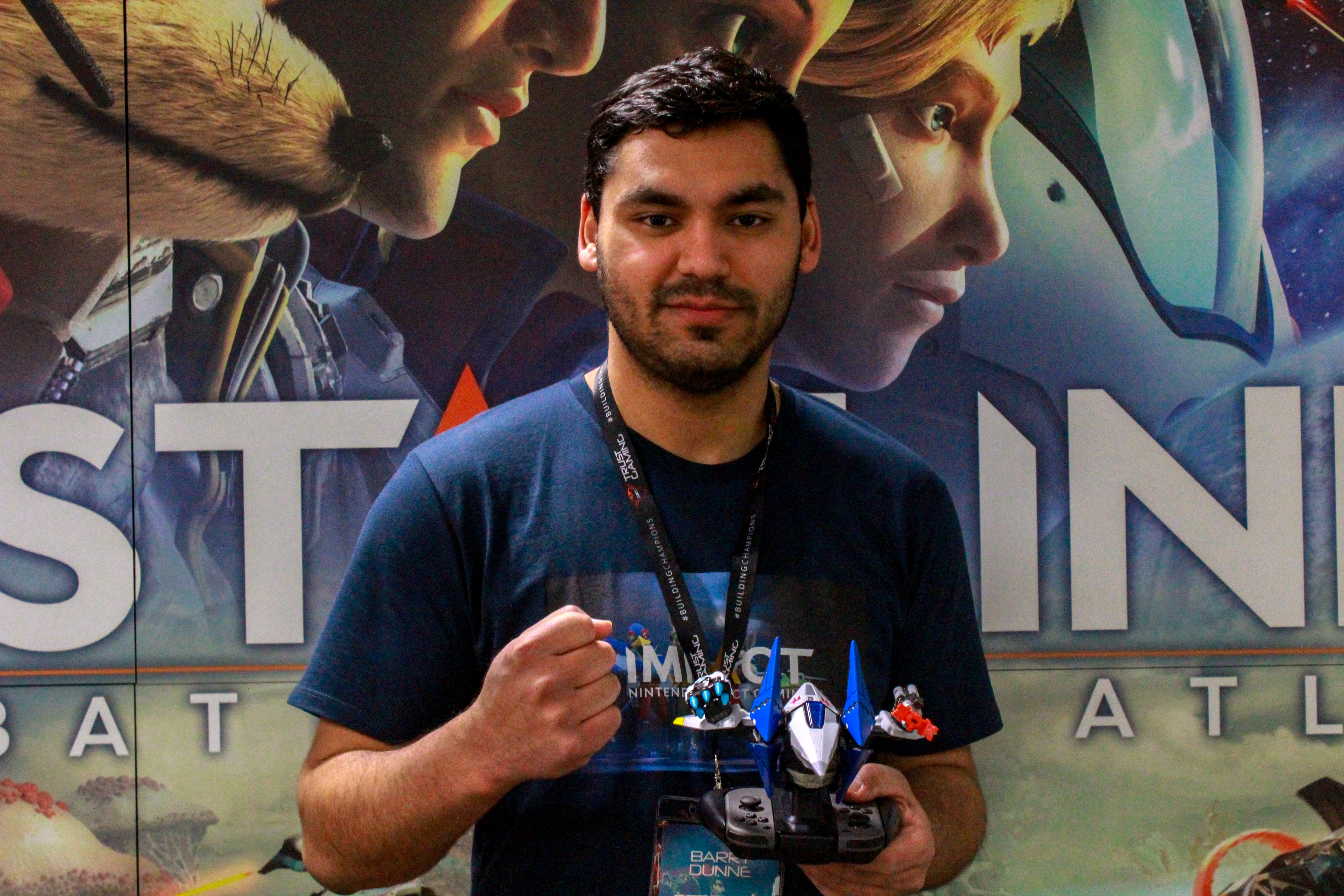 Hey everyone, we are bringing back our Content Creator Spotlight Feature. The feature is a series of articles in which we interview fellow content creators who share a love gaming and provide an insight into who they are and what they do. To help revive this series, we reached out to Barry Dunne of Impact Game Station. He was all too happy to help out so get ready to find out more about this talented YouTuber and Voice actor from Ireland.

Miketendo64: First off, a real easy one. Who are you and what is Impact Game Station?
Barry Dunne: My name is Barry Dunne and I’m a content creator from Ireland who does some acting, singing, voice-over too when he’s not online. Impact Game Station is my YouTube channel that I created in 2014. For me personally, it’s like a online portfolio for my Creative Multimedia content. I create content that I personally would like to see and don’t always go with the norm that you see many channels do. You will see content from the “biggest” to the “smallest” companies who create amazing games on any platform.
Miketendo64:  You wasn’t always Impact Game Station, you did use to go by another name. What made you rebrand from Nintendo Impact Gaming to Impact Game Station?
Barry Dunne:  Yeh, changing my name from ‘Nintendo Impact Gaming’ to ‘Impact Game Station’ was something that was in my head for a little while to be quite honest. I personally needed a change to the channel. Regardless of the huge amount of Nintendo content out there, I felt limited to what I could upload with what I had here at home. I wanted to upload other content that is available on PC, PlayStation and Xbox but felt I couldn’t and did not want to let the fans down if I did because a lot of people may know me as a Nintendo guy which I get.
I had more than one YouTube channel, PlayStation Impact Gaming and Xbox Impact Gaming which I had just made before I rebranded and wanted to keep everything in the one place instead. I’m personally glad I made the change as it brings more eyes to the channel (I hope) and I get to showcase more content from other Developers who are kind enough to help me out and I love to help them any way I can too. It also means now I can do some merchandise which I don’t think I could perhaps with the old name, Nintendo Impact Gaming.

Miketendo64: How long have you been running your YouTube Channel and what highs and lows have you experienced with maintaining content on your channel?
Barry Dunne: The channel has been running now since March of 2014 (so over 5 years now) and it has changed my life for the better I think. I’ve made so many friends like yourselves and have made friends with plenty of big names in the business too. There is always that struggle. I have been very lucky to have met certain people and being in the right place at the right time. Meeting the likes of Jacksepticeye and Daithi DeNogla a few years ago helped too. Sometimes, a video I may have made a year or two ago, may suddenly just explode and it baffles me haha.
I’ve had plenty of lows too. I’ve had periods where I’ve spent maybe plenty of time creating videos that I may have worked hard on, and they wouldn’t do well. There have been days where I genuinely just wanted to relax and do nothing on my days off of work. Unfortunately, I work in a retail job too and it feels like I’m there every day and it plays a factor too on the channel, I just don’t want to do anything when I get home which I apologize for to anyone reading this. We all need a mental break every now and then from doing what we love.
Miketendo64:  As we mentioned earlier, you rebranded your channel, are you still very much a Nintendo gamer or are you a multi-platform gamer?
Barry Dunne: Yes, I am multi-platform but I guess a lot of my content is still mainly Nintendo content. A lot of people want to see a lot of the games that come out for all platforms, played on Switch and see how it performs, are the visuals good, is it worth the extra few quid to get a version that’s portable. I hope that answers your question!
Miketendo64: Many moons ago, you used to have a blog on WordPress as well, didn’t you? What was the blog for and why did you refocus attention from the blog to your YouTube Channel?
Barry Dunne: Yes I had a WordPress website set up for Nintendo Impact Gaming but that flopped. I actually have something set up for IGS but it isn’t live yet. I guess it’s just another way of checking out my content perhaps instead of going directly to my YouTube channel.
Miketendo64: On your channel, you share Gameplay videos, trailers and interviews. Who was your favourite person to interview?
Barry Dunne:  That’s a tough one. Even though I’ve loved having whoever I’ve had on, like Hannah Telle from Life Is Strange, Matthew Modine from Stranger Things, David Wise from Rare/Playtonic Games, I would probably say Grant Kirkhope. He’s one of my favourite people in the world and we keep in contact. Grant has done so much for my channel. He’s been on my Podcast show 3 times already and when the Banjo Kazooie news hit for Smash, I was the first at the time to get him for a video interview and it exploded and I’ll always be thankful. He doesn’t want anything in return and he’s a valuable member of the IGS family!

Miketendo64: You also have your own ‘Impact Direct’ where you help promote games coming to various platforms. Tell us a little bit about them. What is your goal with the Impact Directs?
Barry Dunne: Impact Direct is actually making it’s first anniversary on September 25th so will I have something for it’s 1 year anniversary? Who knows! 😉 For anyone who doesn’t know what Impact Direct is, think Nintendo Direct – but it caters to ALL platforms. I may be the first to do something like this on YouTube (yes I started this before Kinda Funny for anyone reading lol). Impact Direct is about showcasing world exclusive first looks, new gameplay footage of a game we may have already seen and more.
Like I said above, Grant has been so good to me, he actually done the intro to my Impact Direct E3 2019 Edition which was hilarious. I’ve also had some other guests too like Bobby The Nintendo Guru who helped Debut new screenshots of Chicken Wiggle Workshop which is coming out next year, and Levi Bond from dBXY too who created the music and sound effects for Bouncy Bullets from our good friends Petite Games/Ratalaika Games. If you are a Game Developer and would like the chance to feature your game in an upcoming Impact Direct in the future, please feel free to contact me!
Miketendo64: What inspired you to become a YouTuber and how does it affect your daily life?
Barry Dunne: That’s a great question. Well I studied Creative Multimedia in college for a few years and I was
reporting a couple of exams at home and I wanted to pass the time as I wasn’t doing much and I wanted to find a way for me to keep being creative so I decided to make a YouTube channel and it was the best decision I made or else I would not be talking to you right now probably lol It’s a way to help build a portfolio for future work that is to come down the line.
I highly recommend anyone who studies Media in any way, to also create a channel. Even if it’s just for Vlogging/Blogging, it will you to grow and get better. Like I said above, my real life job gets in the way and I would like to do this full time if possible. My ultimate dream in life is to be an actor and do Movies and TV Shows and whatnot. The channel would still be a thing of course but I just want to be myself and enjoy my life. Feel free to support me on Ko-Fi as it goes a long way – www.ko-fi.com/impactgamestation
Miketendo64: Which other popular YouTubers do you look up to and follow yourself?
Barry Dunne: Well of course, I follow you guys. My personal favourite YouTuber would have to be Lamarr Wilson. He’s just a genuine, funny guy who does hilarious unboxing videos. I have to give a shout out to my other YouTube friends too – Nintendo Dads, Nintendo Guru, Paul Lloyd, Gary Gray, Sean Capri, Mega Dads, Little Mar Man.
Miketendo64: What has been your favourite game to play to date on any console?
Barry Dunne: This question is quite easy/hard to answer because I go back and forth on this. It may ultimately be Super Mario Galaxy on the Wii. Super Mario Galaxy 2 is as good as the first but I don’t think it made as much of an “Impact” as the first one did. I think the original has a better storyline, but 2 improved everything overall so it’s tough. I really think the Galaxy games are the best Mario games out there and even better than Super Mario Odyssey (yes, you read that right lol).
And then we have The Last Of Us Remastered on PlayStation 4 and what a masterpiece it is. Personally, it is hands down the best storyline EVER in a video game. I’ve never seen anyone get so attached to a video game like The Last Of Us. That game has done wonders for Naughty Dog and Sony and Part II cannot come out quick enough. The voice acting is phenomenal. The soundtrack, the gameplay, everything is spot on! The Left Behind DLC is incredible too, it gave us more depth to Ellie’s background and the Online is a ton of fun too!
I HIGHLY recommend every picks up Starlink: Battle For Atlas on Nintendo Switch, PS4, Xbox One or PC (Switch has the best version) as it’s an incredible game and my favourite game on Switch, hands down. It’s probably really cheap to get now in stores and all you need is the Starter Pack. If you do get the Switch version, you should purchase the extra Star Fox DLC too for a few quid as it’s another way to enjoy the game too! 😉
Barry Dunne: Thank you for reading and sorry if this was too long for you all to read lol. Please feel free to check me out on YouTube, Twitter and Instagram – Impact Game Station – YouTube and thanks again to the entire Miketendo64 team for being awesome!
Thank you, Barry, for taking part in our Content Creator Spotlight. If you are content creator yourself with a love for Nintendo, be it YouTuber, Blogger, etc. Feel free to get in touch with us at contact@miketendo64.com please be sure to add Content Creator Spotlight to the Subject in your email.
Until Next Time, Keep On Gaming!