[Feature] Even Gaming Gods use the Urinals! Suda51 Saves his Game and Chats Travis Touchdown 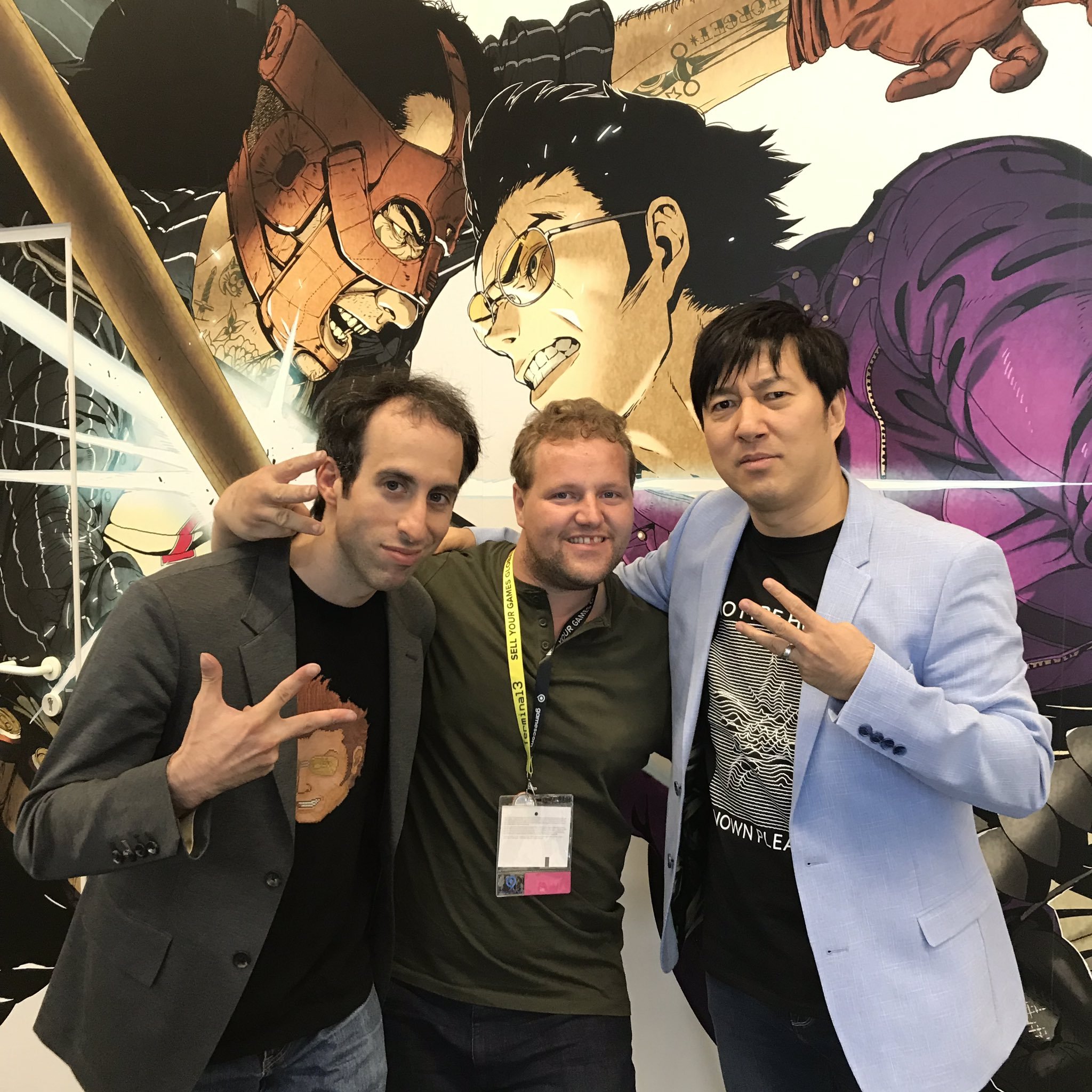 What’s that thing they say? Never met your heroes in real life? But what if you’re just minding your own business, standing over a urinal, only to have a literal god be frequenting the urinal next to you?

Just minutes before I was to have my own interview with the legendary Suda51, as I stood there emptying my bladder, he was next to me doing the very same thing and for those curious, yes he did wash his hands when he was done and no, I did not take a peak. After all, I would need to be able to look him in the eye as I ask my questions.

I’m just grateful he used a urinal and not a stall because if he did save his game before our interview could get underway, no amount of Zelda could have prepared me for the kind of boss battle that would have followed.

Toilet humour aside, although my time with Goichi Suda, better known as Suda51, was rather on the short side, not that I’m complaining, Aaron was a legend for setting up an interview with Suda last minute. Something I do feel that needs to be said is the way the man presents himself.

Even though I don’t speak a word of Japanese and he isn’t fluent in English, every time he responded to one of my translated questions, he looked me in the eye and as I met his gaze head-on, the passion for what he was saying, was as clear as anything and the expressive hand gestures just further conveyed his sentiment.
It was his way of speaking however that made me do the same in return. Whereas I practically spoke my first couple of questions directly to Gavin Greene, aka the translator, the rest were aimed directly at Suda and on the instances when I did look around the room, even Aaron and the Grasshopper Manufacture team that were present, took the time to listen to Suda and bask in the warmth of his enthusiasm.

As for the things that were asked and answered, naturally No More Heroes 3 came up, but not as much as you would think, as I actually spent my time trying to ask questions of a different nature. So, on the subject of No More Heroes 3, Suda made it abundantly clear that motion controls will be supported, just like they were in No More Heroes and No More Heroes 2: Desperate Struggle for the Nintendo Wii.

He also confirmed that the game is still on track to exclusively release on Nintendo Switch in 2020 and at this moment in time, the game is around 50% complete. Although I regret not asking it now, it was previously reported that Suda was in talks with Marvelous about bringing No More Heroes and No More Heroes 2 and I did not seize the moment and ask what is the latest on that discussion.
Instead, I did ask about the Dan Smith (killer7) cameo in Travis Strikes Again: No More Heroes, to which Suda explained was something they made happen, as a gift to the fans and with it being a spin-off title, it was something they could easily implement, but is not something that would ever occur in a mainline No More Heroes game, so if you were hoping for more cameos, it’s doubtful there will be any.

What’s more, Suda is very excited to be working on No More Heroes 3 as it is a dream come true, but he was in fact taken by surprise when he saw just how popular the reaction was to its announcement. He wasn’t expecting it to trend the way it did on Twitter, but he was in awe of the reaction and said perhaps Travis is so popular, since compared to other video characters, he is one who could very well be our next-door neighbour.

With the No More Heroes games being less fantastical and more realistic, Travis is a bad boy gamer and the kind of guy we can all look up to and want to hang out with. Fans should be delighted to know that No More Heroes is as much as a game that aspires to meet the vision of Suda and the fans. Grasshopper Manufacture has taken the time to listen to what the fans want and they want to deliver a game both the devs and gamers can enjoy.

As for another game that Suda would love to bring back into the fold, Suda does wish to stand by his promise to try and do a remake of Flower, Sun, and Rain. He feels there is still plenty more he can do with the IP and relishes the chance to work on it again, but don’t expect anything anytime soon, as it could be upwards to 30 years before anything happens.
For a final question however, instead of asking Suda about what he hopes to see from the sequel to The Legend of Zelda: Breath of the Wild, since he was a fan of the first, or what are the chances of Travis getting into Super Smash Bros. Ultimate, I decided to keep it about the fans instead and asked a cosplay question instead.

Suda and the team over at Grasshopper Manufacture, are well aware of fans expressing their love for all things Travis and have seen it quite a bit from time to time, and it was precisely on that note that I used my phone to pull up two pictures by Francisco Dominguez, which has him rocking some truly incredible Travis Touchdown cosplays that had everyone in the room gasping in awe.
Naturally, I struck while the iron was hot and produced a postcard and asked if Suda would sign it, so I could send it off to Francisco, since he is an acquaintance of ours and the legend even signed my press pass before we all went outside and posed for some photos.

Some heroes may not warrant meeting, but everyone needs to meet Suda at least once, because just like Charles Martinet, he is an absolute diamond and just being able to spend time in their company, is like dining with the gods in Olympus!