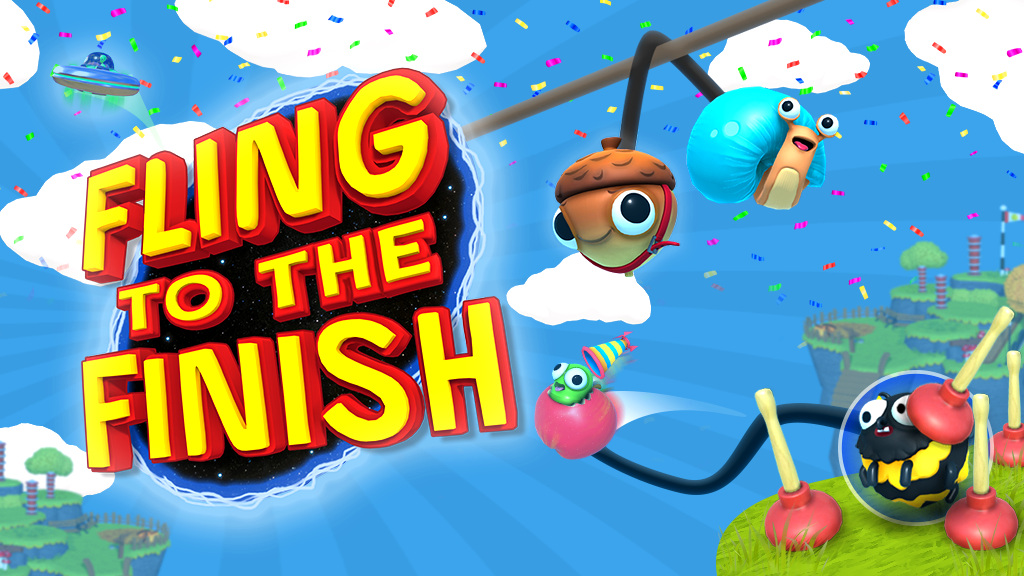 In typical interview fashion, would you be so kind as to introduce yourself to our readers and tell us a bit about yourself, your background and your involvement with Fling to the Finish?

Andre: Hey everyone! I’m Andre Edgarian, co-founder of SplitSide Games, and gameplay & level designer on Fling to the Finish.

Ryan: Hello! I’m Ryan J. McMahon, the other co-founder of SplitSide Games, and a designer & producer on the game.

SplitSide Games is a team of five young but talented developers. So young we all graduated from college last week!

Ryan: Fling to the Finish is a cooperative racing game where you’re tethered to your best friend or worst enemy. You share a controller with your partner and must communicate your every movement to overcome colorful, chaotic obstacle courses.

When you and your friends first pick up the game your rope will get tangled in practically everything you pass. But as you quickly improve your communication skills you’ll learn that the rope is your biggest asset.

Experienced players can use the rope to swing around perilous obstacles, and fling their partner up ledges before they fall to their doom. When partners master using their rope, they’re capable of acrobatic feats unachievable in any other platformer!

What made you decide to bring Fling to the Finish to the Nintendo Switch?

Andre: Ever since we started designing Fling to the Finish, we knew it would be amazing on the Switch even though we never imagined it being possible! Split Joycons are a perfect match for the two tethered creatures that players control, and Nintendo’s focus on local multiplayer and couch co-op makes the Switch a great fit for our game. Also, as someone who has played Nintendo games for his whole life, publishing a game on Switch is a dream come true!

Fling to the Finish looks to be a fun multiplayer game with a unique gameplay twist of sharing a controller between two people to work together to an end goal. Was this method of gameplay decided on from the beginning or did sharing a controller go through iterations along the development process?

Ryan: The shared controller was actually a happy accident we stumbled upon! When we created the first prototype of the game, it was just easier to put the whole team’s controls on a single controller. It was more simple to program and it also meant we could test the game ourselves without an extra set of hands. We thought this was something we would phase out, but soon realized it added an extra dimension to the game that fit so well with the core of our cooperative experience!

Does Fling to the Finish have other modes like single player or is it entirely focused on the multiplayer experience?

Andre: Fling to the finish does have a single player mode. Every course can be played through in a traditional platforming campaign, similar to the way that a game that Super Mario 3D World can be played alone or with friends. Single players can also play through a few special modes that modify the rope and make it behave in different ways, adding an extra challenge to all the levels.

What were some of the highlights of designing and building Fling to the Finish to date?

Andre: Fling to the Finish is the first game we’ve worked on professionally, so every part of development has been a big learning experience. Just a few years ago most of our team members were just university freshmen who didn’t know anything about making games, and now we’ve somehow managed to make a game that will be released on a modern game console. We’ve spent two long years working thousands upon thousands of hours outside of college classes to make this game happen, and I couldn’t be more proud of my team for bringing Fling to the Finish to where it is now.

Are there any Switch specific features that you have been able to incorporate into the game? (HD Rumble, Vertical orientation, Local Wifi, Switch Online, etc?)

Along with solo and local multiplayer, the game can be fully played through online with friends. Groups of players can form lobbies and be matched against up to 8 other teams using Nintendo Switch Online!

Are there any Switch specific aspects of the game not present in the Steam version of the game? (Levels and areas, secrets, etc?)

Andre: The two versions of the game will be the same, although I’m sure we’ll throw in a few easter eggs for Nintendo fans 😉

Are there any limitations or advancements that the Switch version possesses that the Steam release does not?

Andre: Our goal is to make sure that the Switch version of the game is well optimized and runs just as well as it would on any other system.

Are there aspects of the game that had to be changed or refined for the Switch version?

Ryan: We’re developing the Switch and Steam versions of the game in tandem and keeping the user experiences as close as we can to one another. They will both share all improvements and refinements.

As a developer and a gamer, what do you think about the Nintendo Switch?

Andre: The Switch is an insanely cool console. If I had been told as a kid that eventually I could play something that looked better than Twilight Princess on what is essentially a giant Game-Boy, I would not have believed it.

As a developer, it’s good to be working on a platform that heavily supports Indie releases and makes consumers excited about purchasing new games from outside of the Triple-A industry. That kind of support goes a long way for small guys like us.

Was the Switch version always planned when working on the game, or was it something that was decided after the success of Nintendo Switch presented itself?

Ryan: When we began development of Fling to the Finish we were college students, so we didn’t anticipate it being more than a small game released on Windows. It was only after seeing complete strangers at conventions have a blast with the game that we realized we had something really special. Fans asked about a potential Switch release every chance they got so as soon as we decided to think of the game as a real product we knew the Switch was a no-brainer!

Are there any plans for DLC or additional customizations to your characters in Fling to the Finish?

Ryan: We definitely plan on releasing additional levels after the game’s initial release! These levels will be free so there’s always new obstacles to master and new courses added to the pool of online levels! We would love to create additional characters and character skins after release as well.

Where did the idea of the Fling to the Finish creatures come from and do they have a name?

Andre: The characters were spheres from the start, and we wanted to give each one a unique visual theme so every person can have their favorite! That’s why you can play as anything from a giant acorn to a retro TV. We call the creatures “Flingers,” which is obviously a name we spent a long time thinking about.

Do you have other Switch projects in the works that you can discuss?

Andre: We haven’t had much time to think about what our next game will be in the chaotic haze that has been this game’s production, If there’s ever a Fling to the Finish 2 it will definitely be coming to the Switch.

If you had to give our readers just one reason as to why they should back the Kickstarter and/or pick up Fling to the Finish when it releases, what would that be?

Ryan: Well! Fling to the Finish is a video game. Of course. But it’s a game that allows you to have a truly unique experience outside the screen with the people you care about the most. Whether you’re partnered up with your best friend, significant other, stranger, or parent, the cooperation and communication required results in stronger relationships with lots of laughs.

Backing the Kickstarter helps make this experience the best it can be. Having just graduated college, Fling to the Finish is our leap of faith into the real world. The Kickstarter allows our team to stay together in Philadelphia so we can give this game the time and energy it deserves.

Lastly, is there anything you would like to say to the Miketendo64 fanbase and readers about Fling to the Finish?

Andre: We just want to let everyone know that we’re so happy to share this game that we’ve put our blood sweat and tears into. If you’re a fan of fun party games or 3D platformers, you won’t want to miss playing Fling to the Finish!