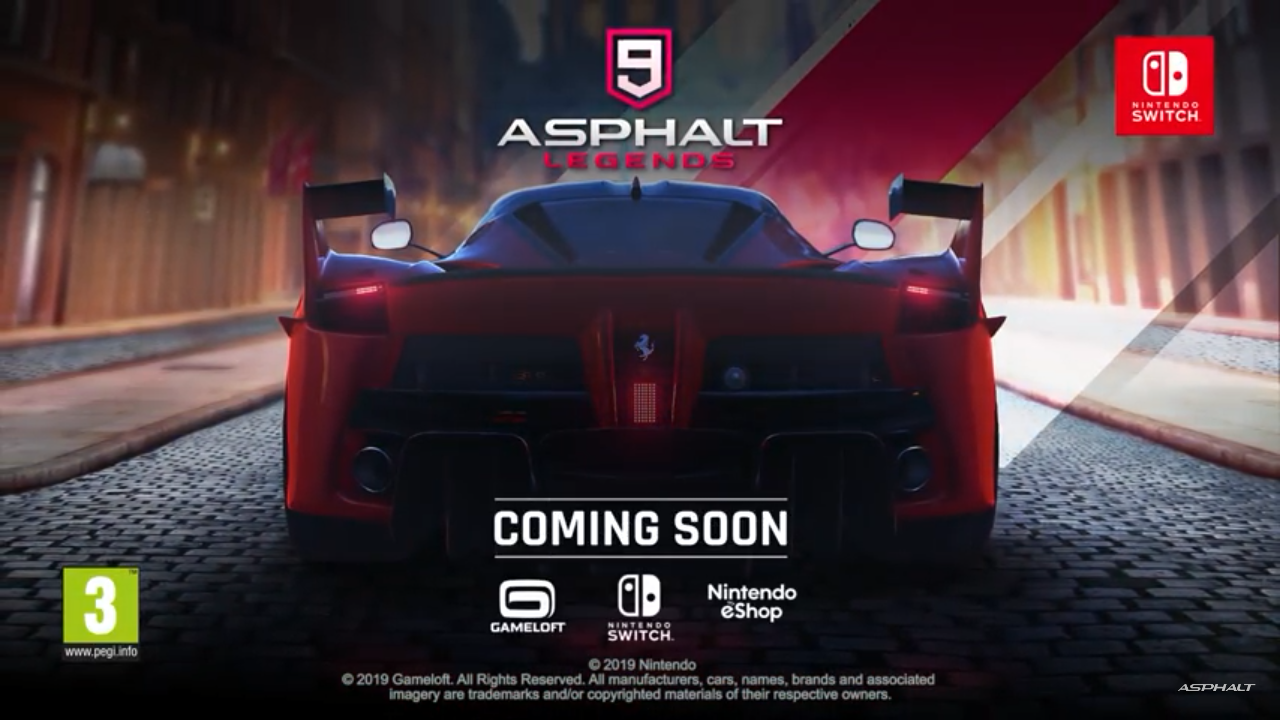 Asphalt 9: Legends Racing Onto Switch For Free This Summer

Gameloft have announced that they are releasing mobile racing title Asphalt 9: Legends onto Nintendo Switch this Summer. The game will be free-to-play and will have in-game purchases. Local split-screen Multiplayer mode and Quick Race will also be available. The latter will be playable both online and offline. A Nintendo Online Subscription will not be required to play online.

You can find out more information about the game in the official announcement below along with a snazzy new trailer.

Races onto Nintendo Switch™ this Summer

Drive some of the world’s most famous cars on TV or on-the-go with new features, including local split screen and more.

Paris, June 6th, 2019 – Gameloft, leader in the development and publishing of games, is thrilled to announce that Asphalt 9: Legends, the latest entry in the world’s most downloaded, multi-awarded mobile racing franchise, is launching on the Nintendo Switch™ later this Summer.

This is the second title released on the Nintendo Switch by Gameloft after Modern Combat Blackout, and a continuation of the long tradition of Asphaltgames on Nintendo’s platforms, beginning with Asphalt: Urban GT for the Nintendo DS™ in 2004. Gameloft is thrilled to announce this Nintendo Switch version of Asphalt 9: Legends will introduce local split screen multiplayer and a brand new Quick Race mode playable offline and online. Players will also find the series’ acclaimed arcade racing gameplay tailored to fit the Nintendo Switch, allowing for a variety of play styles, using Joy-Con™, the Nintendo Switch Pro Controller™, gyroscopic motion controls, touch screen controls, or the innovative Touchdrive™, a fresh approach to driving controls that adds a layer of strategic decision to the sheer fun of the ride.

Asphalt 9: Legends on the Nintendo Switch will be free-to-download, and a Nintendo Switch Online account will not be required to download and play online. Gameloft brings the highest standards regarding freemium monetization and players will be able to enjoy the game and unlock all content without making an in-game purchase. For players wanting a head start, the “Asphalt 9: Legends Starting Racer Pack” is available at launch and unlocks incredible supercars and resources to boost progress and to challenge friends and family in split-screen multiplayer right from the beginning.

Created by Gameloft Barcelona in 2018, Asphalt 9: Legends quickly became the critically acclaimed and multi-awarded reference of mobile arcade racing games. In this Nintendo Switch version, players will find the same fun, arcade racing experience where they can perfect their skills, prove their worth, and become legends by cruising across awe-inspiring tracks set around the world. They will collect and unlock world famous licensed hypercars and stunning tracks by racing through the robust single player campaign.

Asphalt 9: Legends launches with nearly 60 super and hyper cars including some of the fastest, rarest, and most prestigious cars ever made, such as the Bugatti Chiron, the McLaren P1 and the Lamborghini Terzo Millennio, exclusive to Asphalt 9: Legends. Gameloft will update Asphalt 9: Legends with new content similar to the mobile and PC version of the game.

Asphalt 9: Legends supports up to 8 players in online play free-for-all and up to four player local split screen. Split screen functionality allows players to race on one of the 42 tracks available, with up to three local opponents with the new offline gameplay mode.

“Bringing Asphalt 9: Legends to the Nintendo Switch is an absolute joy for everyone at Gameloft. We are great fans of this platform and wanted to do this for a long time, and it has been a strong request from our community,” said Baudouin Corman, Chief Operating Officer at Gameloft. “The Nintendo Switch is a truly fantastic console and Asphalt 9: Legends fits it perfectly. After the recent release of Modern Combat Blackout, it is a new step for Gameloft in bringing our games to various platforms, wherever our players are.”

More information on Asphalt 9: Legends for the Nintendo Switch will be announced later this year.