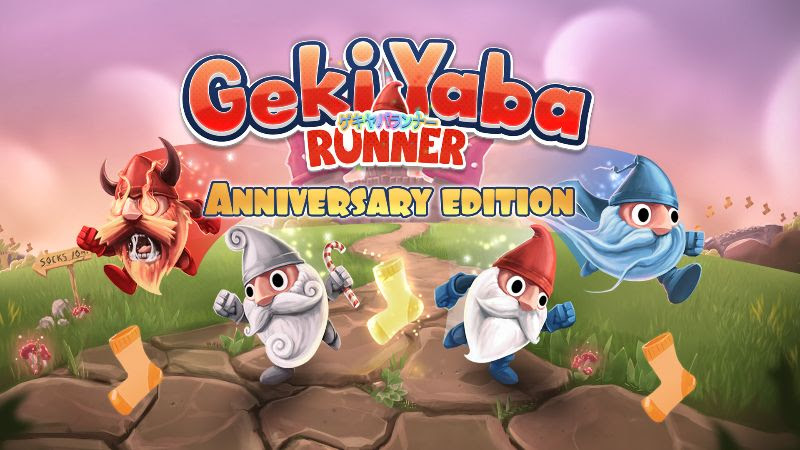 You can find out more about this adorable yet rage infusing Gnome Runner in the official announcement below.

You’re a cute gnome and you have to run, jump, and fly to rescue the princess!

FOR IMMEDIATE RELEASE – May 31st, Warsaw, Poland.
Who are you? A charming little gnome. What’s your mission? To save an innocent princess from her dismal fate. To achieve this, all you have to do is run. Sounds simple enough. Let’s not forget though, that in general, gnomes are not what you’d normally call “the running type.” But don’t be fooled – the blood of a raging beast flows through the veins of this little leprechaun. So what are you waiting for? Take control of this adorable gnome and save the princess!

Geki Yaba Runner Anniversary Edition (https://www.nintendo.com/games/detail/geki-yaba-runner-anniversary-edition-switch/) is now available completely free to all gamers who already own one of the other QubicGames premium titles. This amazing offer is part of QubicGames’ 15th birthday celebrations. And if you missed the fun, check out the QubicGames anniversary video HERE, or visit https://www.qubicgames.com/ for more sweet deals, price drops, giveaways, and contests.

Jabba the Hut? Nah… it’s Geki Yaba and his path of doom. Start as a cheerful, bubbly little gnome and transform into “Speedy Gonzalez” to overcome the toughest obstacles that Yaba can throw at you.  Let the lightning-fast, sprinting athlete awake in you. Test your skills in over 130 ultrahard levels. Take part in an amazing adventure filled with magic, fun and… running. It’s the only way to save the sweet princess!

•    Take on one of the hardest “runners” ever made;
•    Put your skills to the test in over 80 charming and ingenious levels;
•    Many tough obstacles await you behind the castle gates;
•    Overcome your weaknesses and save the princess from impending doom.

Geki Yaba Runner Anniversary Edition is now available for free on Nintendo Switch (https://www.nintendo.com/games/detail/geki-yaba-runner-anniversary-edition-switch/) to all gamers who already own one of the other QubicGames premium titles.