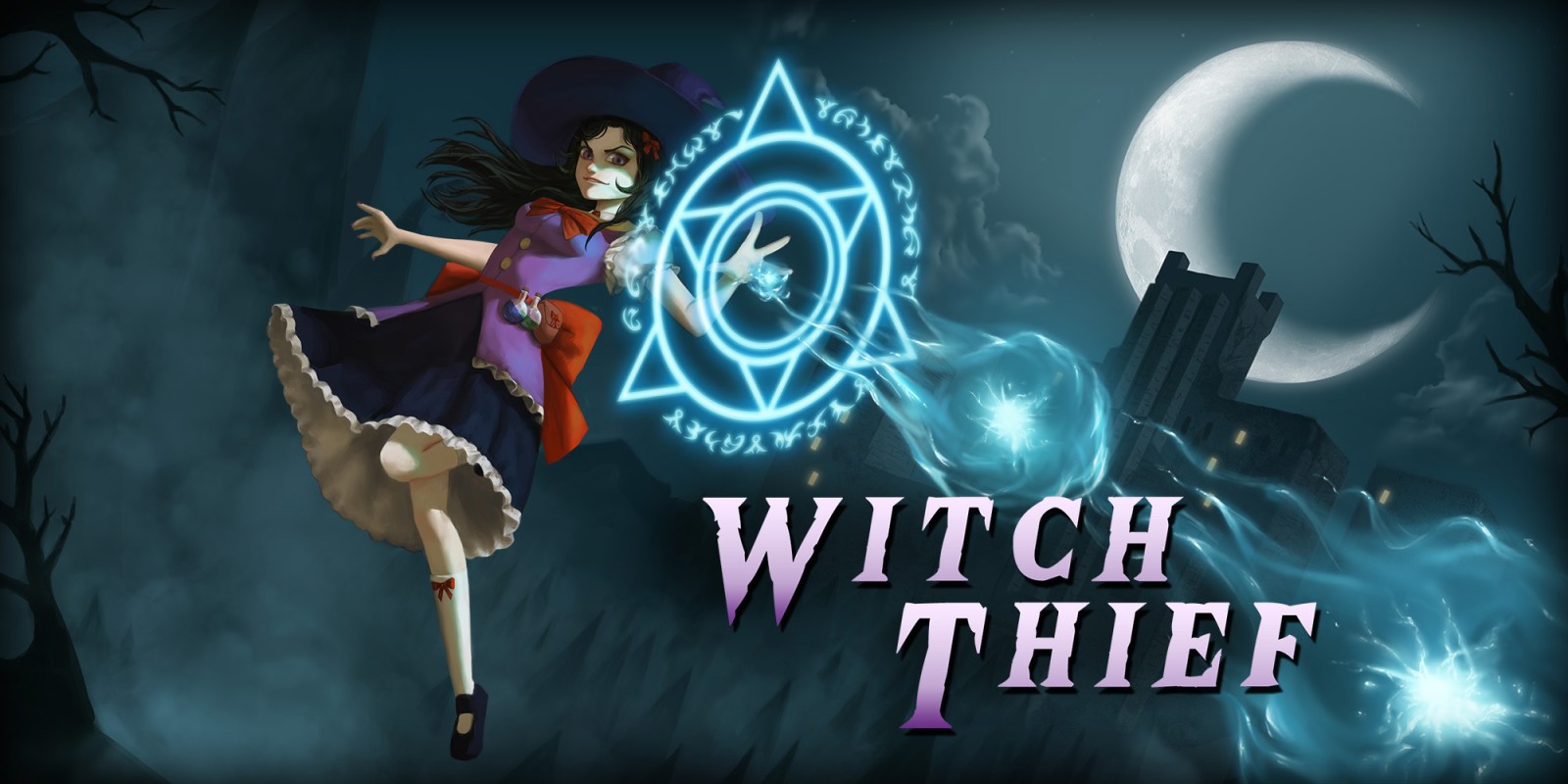 The Touhou Project (a series of popular shoot-em-ups) has garnered a huge variety of fan-made entries across all kinds of genres over the years, many with the blessing of the original creator.

Despite lacking the official license, Witch Thief looks and feels like another one of these myriad fan games, from its Reimu lookalike doll enemies to its battles filled with colorful projectiles that fly every which way. Unfortunately, the one thing Witch Thief can’t seem to replicate from the mainline Touhou games, is their fun and quality.

Witch Thief’s story is set up in its opening cutscene. Long ago, an evil warlock attempted to take over a peaceful kingdom using his magical powers. Four mages banded together to defeat the warlock and seal him inside a magic grimoire.

Years have passed and peace has once again returned to the kingdom, but the evil grimoire still calls out from the darkness, hoping to influence someone with its magical power. The Witch, a mischievous thief, decides to steal the grimoire just for the fun of it.

She soon discovers, however, that the grimoire’s evil plans have already begun to unfurl. It’s not terribly engaging stuff, but it’s better than nothing. You’ll get more entertainment from the goofy cutscene dialogue and strange cribbing of the iconic Breath of the Wild font than the plot.

(No, I didn’t take this screenshot mid-dialogue. The sentence actually just ends with “do”.)

Witch Thief is a third-person bullet hell shooter. The player floats about as the Witch, firing magical projectiles at enemies as they fire an assortment of energy beams, lasers, bombs and more in return. The Witch can collect power-ups that change her current weapon, and collecting two of the same type allows her to use an even stronger version.

The Witch can also use a super move that lets her reflect the magic of her enemies back at them, as well as a dodge mechanic that allows her a brief few seconds of speed and invincibility. You’ll have to battle multiple waves of enemies and take out two bosses per stage over the course of 6 levels.

The lack of variation in enemies or attack patterns, make Witch Thief begin to drag only two stages in. I was only halfway through the game and I already found myself tired of fighting the same three enemy types in six similar looking areas. Bosses are also a disaster, featuring unmemorable attack phases that are either too easy to dodge or so difficult it’s more luck than skill if you survive them.

These are a far cry from the artfully designed bosses in similar games like Furi, where each boss attack pattern has a clear strategy to beat it and failing to win falls entirely on the poor strategy of the player. Witch Thief’s strange camera doesn’t help matters either.

A top-down view (used in most bullet-hell shooters) would allow the player to get a better view of the battlefield and mitigate the chances of being hit from behind by an unseen shot. This game instead features a third person behind-the-back camera, which makes seeing the whole battlefield nigh impossible. Frustrating deaths caused by unnoticed orbs that slip behind you are plentiful.

Upon fulfilling certain conditions, there are also additional playable characters at your disposal. The option to play as multiple characters could possibly be fun if the titular Witch Thief weren’t clearly the best character available. The hardest sections of the game are the bosses, which means you should choose the character that best handles them.

The Witch’s Magic Reflect ability is greatly overpowered, allowing her to one-shot a boss’s entire health bar. It’s an incredibly consistent method of destroying bosses with ease, so the other available characters with powers geared more towards clearing out crowds of enemies just can’t compete. Did I mention the Witch’s Magical Reflect is also the only power that can guarantee a safe retreat following the move’s usage? Just stick with your homegirl.

While the game normally runs well enough, I did have quite a few glitches affect me throughout my playtime. Once I fell into a pit and was promptly respawned inside a wall. I could slip out back into the pit and be respawned back into the wall, but couldn’t return to the main battle arena.

After falling into the pit over 20 times and respawning in the wall, under the stage, inside a set of stairs, and above the stage, I finally respawned correctly. I guess I could have just restarted the level, but the possibility of losing my stage progress was a less than appealing prospect. Another time I was killed after beating the boss of a stage and lost the level, despite activating the conversation with the boss following the fight. Fun!

Witch Thief features six stages, multiple weapons types and four playable characters. As you complete the main story as the Witch, three other characters will become available. Each has their own super move, starts with a different weapon and moves at a different speed.

By playing the story mode over again as a different character, the player can experience the story from a different perspective (though the actual story mode and stages remain exactly the same). The game also features a Dungeon Mode that features more frequent boss battles over multiple floors.

Witch Thief also has a total of five different difficulty levels, ranging from the Chill difficulty that offers infinite lives, to the nearly impossible Insane difficulty where the player only has one life and all enemy projectiles move faster.

The music featured on each stage is upbeat, intense and mysterious as you slip between torrents of bullets in a spooky castle. That’s not to say that it’s anything special, but it fits the action accordingly. It’s too bad that I can’t say the same about audio design for the sound effects.

Your character makes no sound while shooting spells at the enemy and there is absolute silence when your magic hits. You don’t quite realize how crucial some great sound effects are to your enjoyment when cutting down hordes of foes until it’s gone entirely. I have a newfound appreciation for Dynasty Warriors.

The visuals of Witch Thief are… adequate. The same purple and blue color scheme throughout the entire game grows fairly boring after the first two stages. There’s equally little variation in enemy design. You fight red and green dolls, giant knight heads and… that’s about it.

Character models are alright, but the versions shown during conversations between characters are just plain ugly. They look as though they were made out of very cheap modeling clay. I would have preferred to see the developers use the character models already featured in the game instead of these grody pre-rendered designs.

Witch Thief plays competently enough and has stretches where its rooms packed with multicolored death balls captivate you, but these are greatly outnumbered by the times you’ll be bored by the samey enemies, areas, and boss attack phases repeating themselves over and over.

The option to use multiple characters is pointless when the default Witch is better than the rest, and the “multiple storylines” change nothing but the conversations before and after boss battles. A few glitches and a Dungeon Mode hardly worth mentioning make for a game that’s just not as fun as it could be.

Witch Thief is entertaining at times, but its refusal to change anything up keeps it from holding the player’s attention for long. At $20, there are simply better games available on Switch in this genre and at a lower price.