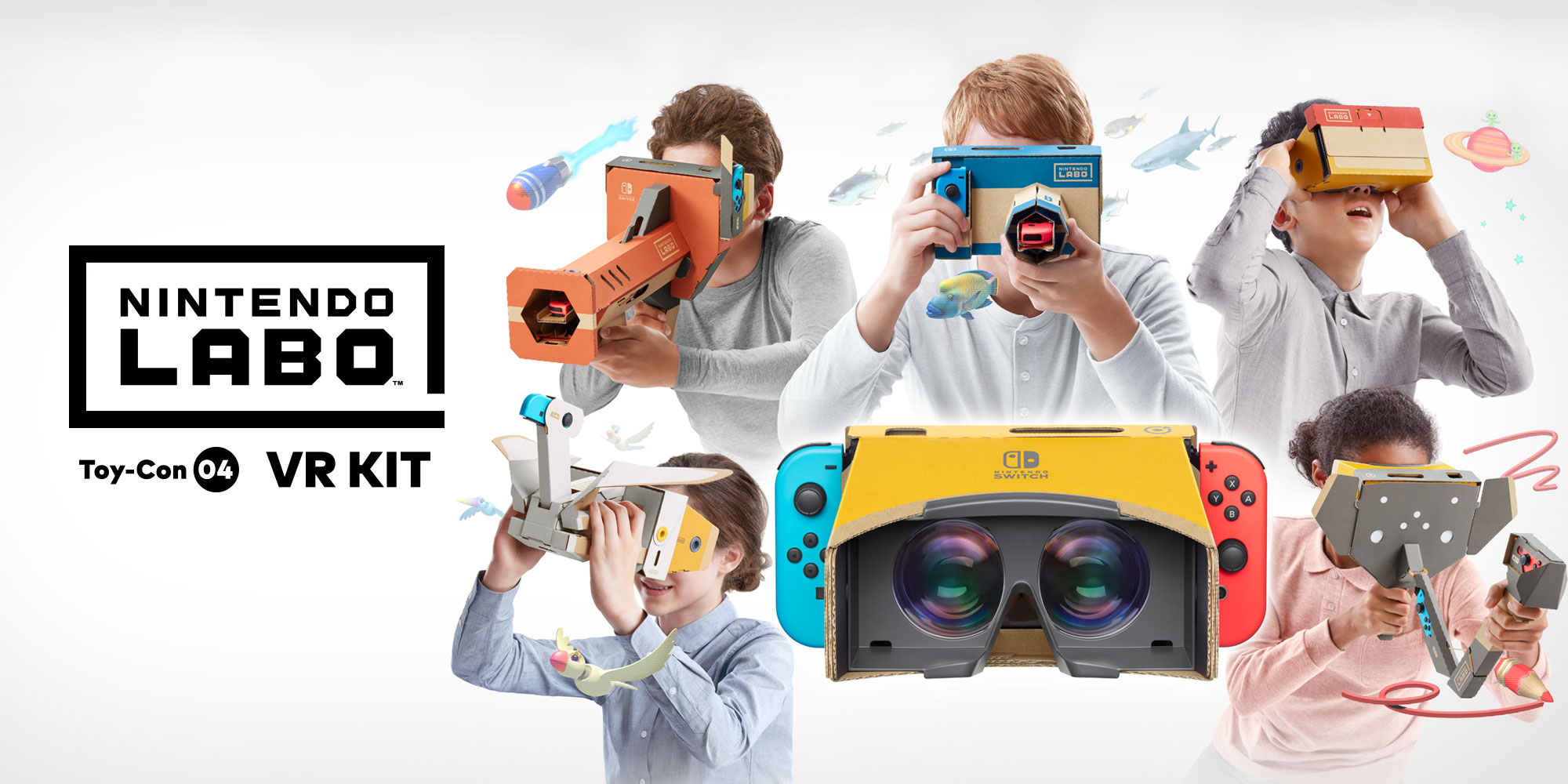 2018 saw the release of Nintendo’s foray into the cardboard ‘toys to life’, educational, build your own toy-con sets. Toy-Con 01 saw the release of the first set and introduced us to a cardboard piano, a playhouse, a fishing rod, motorbike, and an RC car. Toy-Con 02 let us become a ‘robot’ and don a backpack and headgear. Toy-Con 03 gave us the vehicle kit which gave us the keys to a car, dive deep into a submarine and rise to new heights in the airplane.

Now in 2019 Nintendo has unveiled its next step in the evolution of Nintendo Labo with Nintendo Labo – Toy-Con 04: VR Kit. This review is based on the full VR set, which includes the VR goggles, a bird, an elephant, a blaster, camera, and wind pedal.

The Nintendo Labo VR games and the various Toy-Con which you build don’t have a story or narrative per-say, though when you head into the Discovery section, which lets you learn a bit about the Labo VR and how they work, there are a few unique characters that communicate with one another and how each Labo piece works.

The banter back and forth between Prof. Gerry Riggs, Plaise Allatyme and Lerna Lotte is charming and fun, for those times you want to dive in and see how the Labo Toy-Con 04 sets work. Other than that though there isn’t much in terms of a story.

When it comes to the individual main games there are some elements of story and progression found. The games are light on narrative and mostly just serviceable text bubbles and mission instructions before heading off into the ocean or along the on-rails shooter game with the blaster. In contrast though, to previous Toy-Con sets, the Labo VR games for the most part, do have a deeper level of immersion and variety, as well as length to their various outings.

Because the Nintendo Labo VR Toy-Con 04 comes with six different pieces I am going to highlight each one for you in hopes to give a sense of what each toy-con does and what games you can expect to play with each section. I won’t touch on each of the 60+ minigames though, as most of them are 2-3 minute bite-sized games that for the most part you will try once or twice without ever going back to them.

First up, is the goggles, which is the base set that you will use with each of the other Toy-Con, unless you opt to not play the games in VR, which you can do. The goggles form the backbone of the Labo VR set and were the easiest of the builds in comparison to the other Toy-Con. While the quality of the design and the viewing goggles are simple, the one thing everyone has complained about though, is the lack of a proper head strap, which I would agree is a bit of an oversight on Nintendo’s part.

The games you can play with the VR Goggles and the other Toy-Con are simple. I am sure by now you have heard that people have mentioned and even complained about the awkwardness of holding the Labo VR Toy-Con for so long as you gaze into the Goggles, most of the time which is attached to either the Bird, Blaster, Elephant, or Camera. Which each of the sets you may experience some arm fatigue from longer play sessions.

The Camera Toy-Con and Bird Toy-Con are both easier to hold, due to their lighter weight, as well as just the way you interact with them. The Bird Toy-Con does have a repetitive motion as you squeeze the sides to make the flapping motion happen which can also lead to some hand strain when playing for longer times.

Nintendo Labo VR includes nine base games which utilize the various Toy-Con in unique and surprisingly enjoyable ways and the main games include:

If the above list looks overwhelming to you, fear not. Many of the Labo VR games above are best when played in short burst of 15-30 minutes over the course of a rainy weekend or a few days. If you opt to purchase the full Nintendo Labo – Toy-Con 04: VR Kit, instead of the smaller VR Goggles and Blaster only set, you are looking at several hours to build each of the Toy-Con. On top of that, there are several more game hours that you will need to invest as you spend time working through the various games and VR Plaza mini-games.

Between the build times, the game times, and then the VR Garage, there is a lot that Nintendo Labo – Toy-Con 04: VR Kit has to offer. Of course, like the Labo Toy-Con sets before it, your full engagement and longevity may depend on your creativity in designing your Labo Toy-Con, as well as your investment into the VR Garage and building your own games.

Additionally Nintendo recently released a new minigame, first highlighted on the News channel, Alien Boppers and we aren’t sure if Nintendo will add any other minigames in the future or if this was a one time affair. Since the minigames in Labo VR are compartmentalized into their respective icons, I don’t see how Nintendo wouldn’t keep updating the game with small games in the future.

One oddity with Labo VR is that the audio plays from the top of Switch’s speaker, just like it would in handheld mode. Be advised that as you play the sounds will be heard by everyone in the room, despite them not being able to see what you are doing.

The sounds in the games are mostly just blips and bops and not really immersive. There are times during the race sections in Bird Dash that are a bit more thematic, but there isn’t much in terms of quality music or audio within the games.

In Ocean Camera, there is a feeling of muffled sounds as you trek deeper into the abyss of the sea. Labo VR in the ocean does give you a sense of fish swimming all around you as well, and I hope that this small game leads to something more fully realized like the Nintendo revisiting the Endless Ocean series from the Wii era…or Pokémon Snap of course.

As a parent, I will say, this may lead to some jealous moments if you have more than one child and they are all interested in what the gamer who is currently using the Goggles and Toy-Con is doing. I caught myself several times asking my daughters what they were doing and experiencing as I patiently waited my turn to try out the VR games.

Nintendo Labo –  Toy-Con 04: VR Kit is all over the place in terms of its visual presentation and its gameplay performance. The nine main games, that I mentioned above, have a more fully functional design to them, even if the areas you play in are small contained spaces. The House and Ocean Camera areas for instance, have you just moving your head around taking photos, there are no walking or swimming to other parts of the level, there are only a few rooms to explore or a vertical climb or descent to the ocean floor.

In terms of visuals, the games sort of fit within a set design style which leans heavy on cartoony, in terms of the Hop Dodge, Blaster, and Kabalster, though the bear and frog in Hop Dodge remind me more of the animals you would find in Mario Odyssey. Most of the VR Goggle mini-games and many of the VR Plaza games rely more on simple shapes and characters in their designs. This simplification of design elements does make the performance run smoothly throughout the Labo VR experience.

Overall the game runs smoothly, and since there is no docked mode and the visuals are split in two ‘eyes’ for the Goggles to see, I never really noticed anything in terms of frame rate drops and dips.

Nintendo Labo seems to have started out as a tech demo toys to life creation of people who just love to make games. The one big caveat though is that the games require these extravagantly designed and engineered cardboard contraptions. It still amazes me that some cardboard, rubber bands, a few grommets, and no tape whatsoever, can turn into something usable and fun in Labo VR. Looking at the various Toy-Con the Blaster and Camera really stand out as neat, full realized real world items, made into cardboard.

The way you hold and interact with Labo VR still amazes me as something truly awesome and special. The games you play with Labo VR however, are a bit of a hit or miss in terms of quality. There are definitely a few VR Plaza games that I would have been better off not ever playing just because of their simplistic nature and almost immediate boredom sort of soured my whole experience. In some ways, I would have liked to never have experienced Labo VR Plaza and had more full featured games that the 60+ mini games that ultimately are throwaway games.

Nintendo’s first step into Switch VR through Labo is an interesting one. Building Toy-Con will never cease to amaze me and the uniqueness of each of the included sets is remarkable. The games are getting better. I just hope we see more Nintendo games in the future built for Labo VR.

*Nintendo Labo – Toy-Con 04: VR Kit was purchased by Jonathan’s daughters, Morgyn and Bailey, for the purpose of some father/daughter bonding time, for fun, and for the purposes of this review.

Check out some photos of Morgyn and Bailey,
Jonathan’s daughters building and playing with Labo: