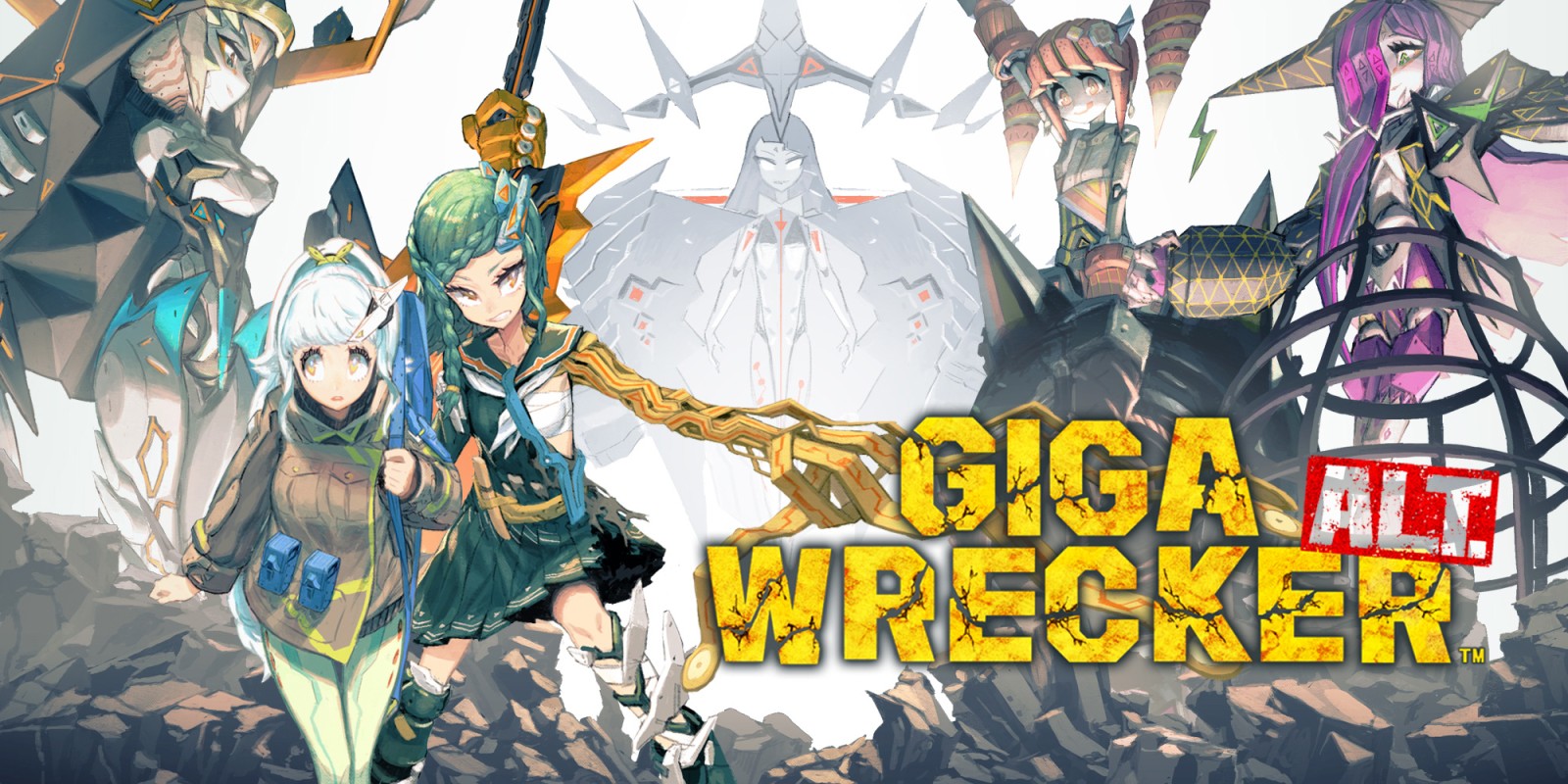 GIGA WRECKER ALT. is the latest project by Game Freak not published or co-developed by Nintendo. Game Freak, most famous for its work on the Pokemon series, has released a handful of games outside of the realm of their frequent business partner, the last of which was Tembo the Badass Elephant.

Borrowing some elements from Tembo, Game Freak crafted a new smash it up style platformer with GIGA WRECKER ALT, providing us with more ways of destroying the landscape and using it in creative ways to solve puzzles.

In a not too distant future, we have been invaded by a malevolent squad of robots that are systematically hunting down and capturing, destroying, and enslaving the remaining humans. Our story begins when a mysterious girl breaks into the jail cell of our protagonist, Reika, and declares that she must kill her in order to save the world, as Reika’s warm heart will destroy mankind.

This is obviously a very strange declaration, and when the alarms are tripped by the would-be assassin, we try to escape and end up unconscious. Coming to, we’ve been fitted with a cybernetic arm, codenamed “ARM” (Arms Reconstruction and Manipulation), by an even more mysterious, yet seemingly benevolent scientist.

He acts as our guide through this world, and serves as the game’s built in-tutorial for use of the ARM, and he also lets on early that he has lost his daughter, which endears him to us. He wants to use us as a means of collecting data on the robot invasion force, and we want to utilize our newfound power to exact revenge and possibly destroy them. Where do we go from here?

GIGA WRECKER ALT. is an action puzzle-platformer with some light RPG elements. Primarily, you will be using Reika’s cybernetic arm to smash up the landscape, and then collect the nanomaterial to form into a ball that she carries with her.

You can unlock new upgrades as you go which allow you to form these nanomaterials into varying shapes and tools to navigate the wrecked cityscape and to help infiltrate the malevolent robot force’s factory. Smashing specific pieces of the landscape (denoted by blue dots) will also warrant you experience points that can be used to unlock different skills and upgrades along a somewhat open grid.

There is a block to be used for reaching higher places, a sword to be used to slice at smaller enemies, a javelin that can be thrown to create platforms and attack, and a drill to be used for clearing the path through touch to crack rubble.

Learning to utilize these different skills, along with manipulating the environment around you, will help you proceed in GIGA WRECKER ALT., there are also some callbacks to Metroid style gameplay in that the world has an open map with beacons for fast travel between locations, which are there to help you return to previous areas and overcome obstacles you are not able to access until you have unlocked a certain ability.

There are also save points, and because there are so many puzzle sections dependent on getting everything just right, there are temporal ports located within a short distance of the puzzle screen that allows you to reset the room until you get the puzzle just right. There also happens to be a companion robot that accompanies you and gives you hints for solving the puzzles by activating his help sign, if you happen to get stumped. Which you will.

Giga Wrecker Alt. has some pretty solid controls, but how and when you are able to throw your ball of nanoparticles takes a lot of getting used to. As mentioned above, much of the game centers around destroying the landscape, collecting particles, and then using that mass of particles to interact with the rest of the environment.

Enemies and obstacles require a certain size of nano mass ball to be overcome, and sometimes you will have to be clever in how you collect your material and what you use it against. Hitting certain things can make mass fall off, at which point you have to recall it to you with the R button. Pressing the Y button hurls the ball forward, but you can also throw it up and down while pressing the corresponding button.

Some enemies will hit the mass and be damaged, while others will just damage you. This inconsistency led me to merely throw the ball at whatever was near me, just to be sure. You can swing at the landscape and enemies with your bare ARM if you have no nanoparticles collected yet, but it is best to have as much nanoparticle as you have available.

Certain enemies in GIGA WRECKER ALT. require a larger ball to be hurt by it, and this is indicated by an aura of energy around them. If that aura is red, they cannot be hit yet- you need a bigger ball. If it is blue, you’re in the clear to send it through. Puzzles in Giga Wrecker Alt. require mostly trial and error, but after a short period of time you will have your helper robot there to assist through visual clues.

Even these can sometimes be very vague, and I solved a few puzzles through alternate means than what was suggesting. While it is nice that there is not just one solution to every puzzle, there isn’t quite the same freedom that you have in The Legend of Zelda: Breath of the Wild.

The skill tree is an unusual addition to GIGA WRECKER ALT., as it isn’t exciting or in-depth enough to make you feel like you need to grind to get it. This works as a plus for people that dislike grinding, but also works as a minus because it almost feels tacked on as a result. There was never a point in the game where I wanted to go back and smash up extra bricks or enemies just to level up.

If it doesn’t feel necessary, why include it? It should have just been a linear progression that when you get a new upgrade or reach a certain area, either this upgrade clicks on, or you can choose between one or the other. Combat is present, but mostly a nuisance in between the environmental puzzles that make the game what it is.

GIGA WRECKER ALT. has a mostly forgettable soundtrack, but the sound effects are satisfying, albeit incredibly limited. This limited selection makes them start to be grating when you have to make multiple attempts at the same puzzle, and so I often just turned the sound off while I was repeating puzzles.

GIGA WRECKER ALT. has beautiful loading screens, and the character designs are serviceable. My biggest complaint here is that everything looks and feels much more generic than I would expect from such a renowned studio, but is one of the areas where you can tell that they weren’t working with quite the same budget they may have had working with Nintendo.

I also noticed some weird animation from the characters, enemies and interactive portions of the environment compared to the background. I imagine this is because the backgrounds are wonderfully illustrated, but seem to have had their colors muted to make the parts you can interact with pop out from the indestructible parts. This weird animation framerate seems to have either been fixed, or I just got used to it after playing for a while.

GIGA WRECKER ALT. runs butter smooth, discounting the aforementioned inconsistency between foreground and background animation. It’s a little hard to describe exactly in words, but it kind of reminds me of stop motion animation where the subject is moving quickly, but everything around it is moving just enough so that it’s obvious there is some interaction, but not quite what it would be in real life. I encountered no glitches during my time with the game.

GIGA WRECKER ALT. shores up a lot of downtime in between the more interesting puzzles and enemies by telling and developing the story through the interaction of Reika with her guide and helper robot. This dialog helps to create a pretty clear sense of duty on Reika’s behalf, and shows her trusting nature.

Unfortunately, the writing beyond that is extremely familiar anime fodder, and really just serves as a means of moving the plot forward, although it isn’t really an important part of the story. GIGA WRECKER ALT. has checkpoints through beacons and temporal portals, but they don’t always work as well as you hope

Sometimes you will activate a checkpoint, expecting it to send you back to that exact location when you die… which does, more often than not, but other times you come back to the game in the checkpoint previous to that, which is often one to three screens prior, and usually has a puzzle in the way.

This is frustrating at best, and discouraging at worst. I think if the game had autosave checkpoints that set you up at the beginning of whatever screen you were on when you died, it would go a long way in improving the overall experience.

GIGA WRECKER ALT. is an interesting take on the puzzle platformer genre that does some interesting things with the ARM system, but it isn’t as addictive as most puzzle games tend to be and my early enjoyment of the game quickly waned as Giga Wrecker Alt’s flaws became more apparent.