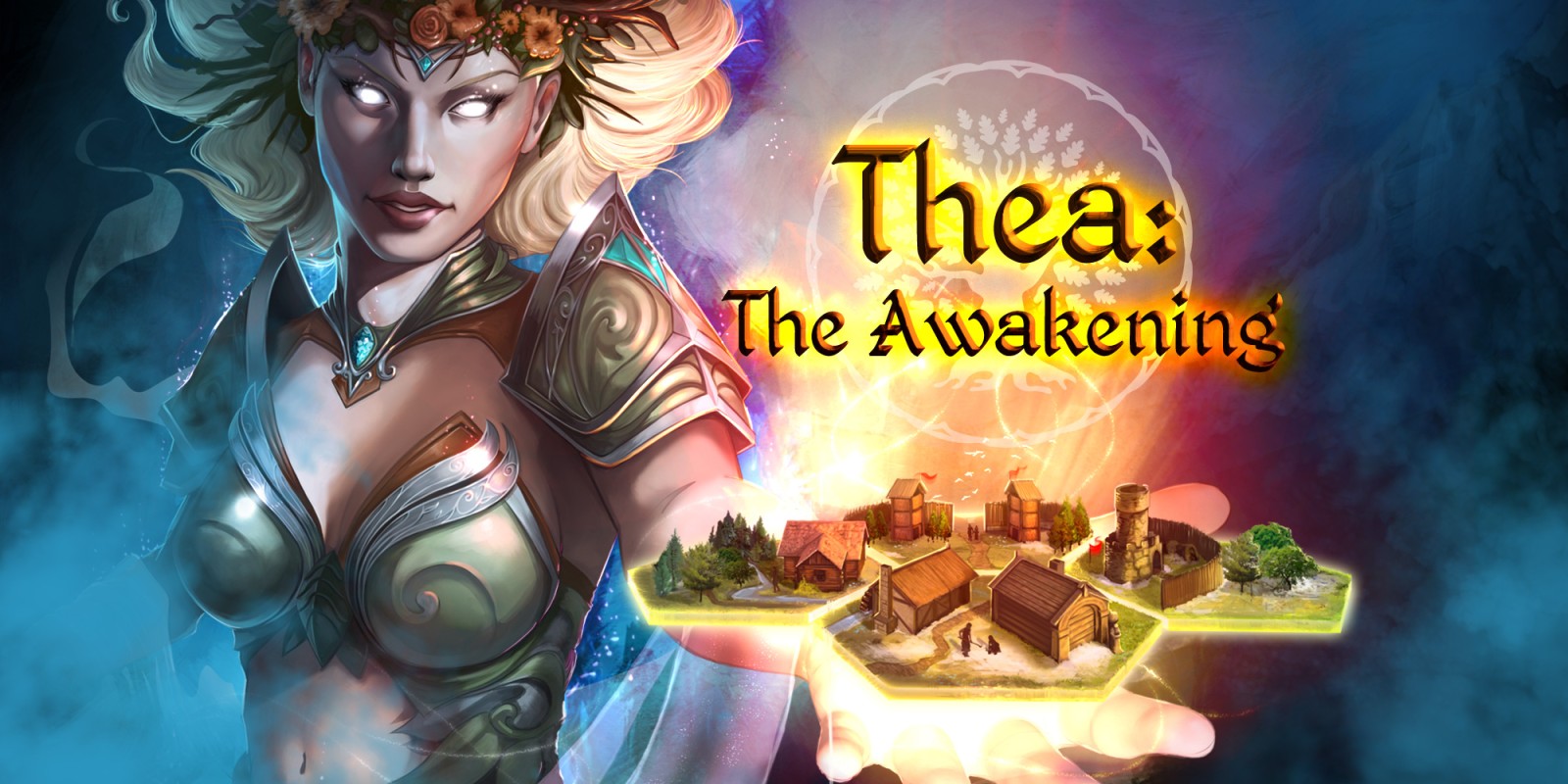 Thea: The Awakening is the first game in the now announced series of Strategy, Board Game titles developed by MuHa Games released on the Nintendo Switch. While Thea: The Awakening is the first in the series, MuHa Games has already announced and is moving quickly to deliver their second game which should arrive in late Spring or early Summer on the Nintendo Switch.

Thea: The Awakening takes its overall story beats from Slavic myth incorporating gods and mythology that is deep and steeped with lore and connections that will excite fantasy lovers. Thea is a turn-based strategy survival game is set after The Darkness, an apocalyptic force has just destroyed the world.

You play as the survivors and set off to stay alive, reclaim village and complete quests During the main campaign you will align yourself with a cast of characters and NPCs that may add to your hope of survival and winning the day.

One of the best aspects of the game are the side quests that introduce characters that are typical antagonists but later turn out to be misunderstood victims of The Darkness and needing help to survive. I often desired to help these plot points and submissions along over the more linear story beats and board game parts.

When you initially start Thea: The Awakening you are given the choice between two gods which will help support your villagers on the battlefield during gameplay. These gods will either add to the rate you gain experience or boost the speed to which resources you collect are gathered. Once you have chosen your god you want to work towards victory.

Victory in the game is achieved by completing the main story quests or by reaching a set goal with the parameters of your city and building up your villagers and their resources. One thing that is clear from the get-go is that the game is deep but it can be slightly obtuse as to what you are supposed to do. This is made more frustrating as to the lack of in-game tutorials and left me asking more questions as to how to progress and what my overall goals were and how to accomplish them.

Along with the board game aspect and how you maneuver in the game world, Thea: The Awakening has a card game battle system which pits you against your opponent where you select cards which can either be used to attack or defend in successive waves, though the card battle is ultimately very thin and becomes repetitive very quickly.

There is also an element of resource gathering and management in the overworld where you will send small teams of villagers on mini quests where you may be tasked with finding something that was once theirs or confronting another war party that stole something from them. These side quests oftentimes have the same superb voice acting, along with some ‘choose your own adventure’ style choice selections which will either prompt a card battle, with victory rewarding you with the item you sought, or end with a truce, and the other party giving you the item and maybe joining your cause. It’s hard to know how every choice will play out though sometimes you can get an idea that a certain dialogue option will work in your favor and lead to a swift victory.

When you navigate the overworld there are many random encounters that may end up killing members of your party or costing you resources unexpectedly. Since encounters are random and can turn the tide quickly in the game they end up being more of a nuisance than anything. And since you are often needing to go on expeditions and straying from the main path to complete side quests the likelihood of these random encounters and losses are high.

Since Thea: The Awakening has several different modes, the board game, card battles, inventory management, side quests, etc. there really is no shortage of things to do. The problem is many of these small tasks aren’t great and are just diversions from the main goals. But they make up the core loop of the gameplay which means you will oftentimes find yourself going through them again and again.

After getting victories in the game you unlock the other starter gods which can add decent twists to the game. Unfortunately, since the main game is still the same board game, card game, inventory management game, there isn’t much fun to be had in replaying over and over again to see the various effects the gods have on the overall gameplay.

The strongest and by far standout part of Thea: The Awakening is its voice cast. Many of the story moments are told through well-acted dialogue, which you can typically read along with via subtitles or text delivered on the side of the screen. Even some of your choices are spoken.

This part in particular, helps to set Thea: The Awakening apart from other games in the genre. For the most part, the lines are delivered with gruffness, in the case of wise gods and trolls, or kindness and heart in from fairies and water nymphs.

Opposite from that is the game’s background music and in-game audio. While the aforementioned audio does compliment the game it’s nothing Earth shattering and doesn’t stand out much compared to the voice acted cast ensemble.

Thea: The Awakening has a decent amount of variety in the visuals department. For starters, the game has a robust amount of hand-drawn illustrations which harken back to the designs off dungeon and dragons characters and other card battling games. The designs are varied and unique and one of the highlights to me of the game as a whole.

The overworld board game sections are set in a hexagon playing field and reminds me a lot of Settlers of Catan and Civilization style games. The visuals are in 3D and look nice and distinct enough, though textures do seem to be muddied a bit for some of the areas.

The water, mountains and grass look bland, but the fog of war that is cleared as you navigate the map gives a sense of wonder, as far as what is ahead of you and what you will reveal. The map is dotted with villages, ruins, animals and more, though their towering scale doesn’t always fit with the tile set they use, in my opinion.

I didn’t notice any performance issues, though I will say you spend a lot of time in the inventory and menu systems, all of which take just a bit to open up and since they are overwhelming with details and selectable areas can be hard to move through and find what you’re looking for. The game has a PC look to its user interface which can be a turn off for most people.

If there were a few nitpick things I had with Thea: The Awakening, it’s the way the game doesn’t teach you the fundamentals of how the various systems work together. It took me a long time to understand the nuances in the core gameplay loop, as well as, how things like inventory management, sending hunting and gathering parties work, on top of which you had to deal with the random encounters and the penalties you would often face.

There were a lot of times where the game required you to explore only to punish you if you strayed too far from your base. Once you find yourself in the gameplay loop and understanding the various moving parts it does get boring very quickly.

Thea: The Awakening is not for the casual gamer. The options are plentiful and the gameplay is deep, if you are willing to put in the time. Gamers that also enjoy tabletop board games, with a card battle system and inventory management appetite, though may find a lot that is enjoyable here in Thea: The Awakening.