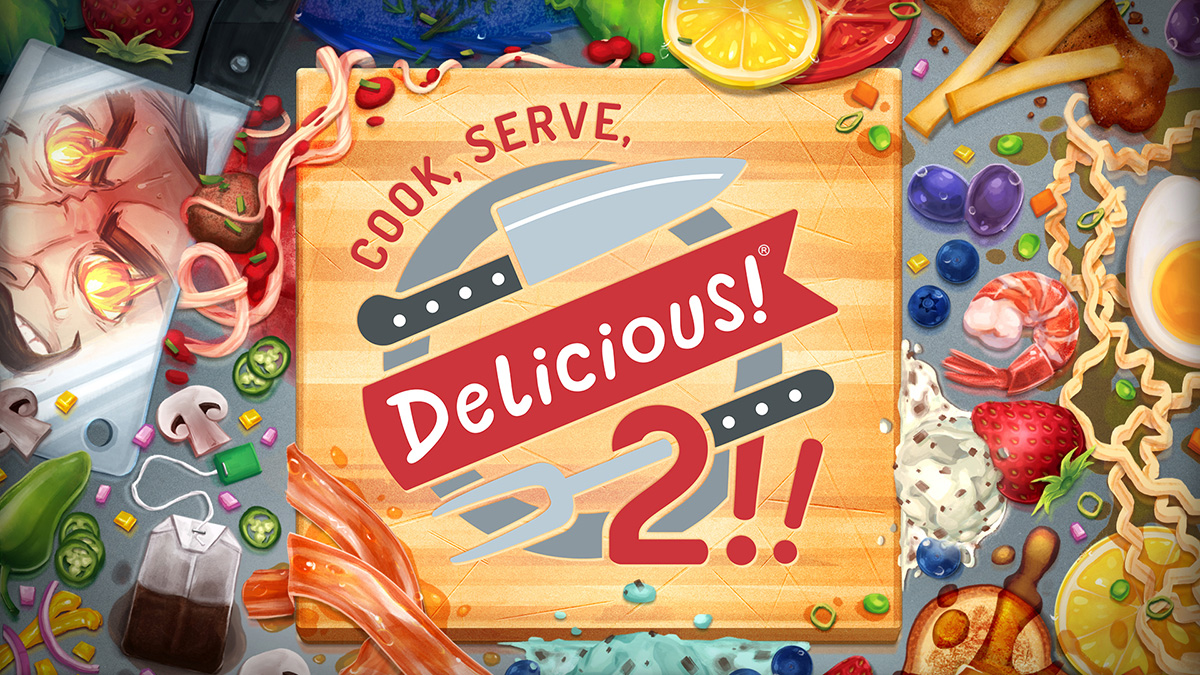 When I was a kid, I used to love playing this 2004 PC game called Ore no Ryomi 2. A loving tribute to obscure PS1 game Ore no Ryouri, ONR2 was an indie freeware restaurant simulator where you had to engage in various mini-games to cook up dishes for demanding customers and use the money earned from doing so to purchase new accoutrement and recipes for your business.

Sure, the art was pretty cheap and the music was comprised of extremely compressed samples stolen from The Sims: Hot Date and Chicken Run, but it had so much heart that it was impossible not to be won over by it.

Years passed and I had all but forgotten about the game, only to learn in 2012 that ONR2’s creator was finally making a sequel to the game. Free of the shackles that came with being a glorified fan-game, Cook, Serve, Delicious! was an incredible followup that took everything I loved about its predecessor and kicked it up a notch.

Unfortunately, by that point I was more of a console gamer, so I didn’t get much opportunity to play the PC-only release. Thankfully here we are with Cook, Serve, Delicious! 2!!, which finally comes full circle and brings the series to console just like Ore no Ryouri did so many years ago.

Unlike its predecessors, CSD2 offers a level-based story mode. Hot off your success from managing your very own restaurant in the previous game, a series of corporate blunders leave you forced to start fresh with a new store in Teragon Tower, a massive skyscraper with tons of other restaurants for you to take jobs at to gain money and work your way back to the top.

You can select from over 30 different eateries, each of which offers their own specific menu. For example, Chilly Bowl specializes in ice cream and desserts, while Biggs Burger sells… well, I’ll give you one guess. With multiple levels to complete in each restaurant, there’s a ton of content here.

But what do you actually do? Well, you work in a restaurant. Customers will come in the door and request a certain food, and it’s up to you to make it. Some foods are simple – if someone orders an easy food like chicken strips, you don’t need to do anything besides stick the chicken in the fryer and dunk ‘em. Something like a burger on the other hand, is a tall order.

First, you have to grill the burger, then you have to dress it to their exact specifications. Lettuce, tomato, cheese, pickles – but no onions! If you mess up the order or take too long, the customer won’t be satisfied, and your reward at the end of the day will be smaller. There are also chores to worry about, and you can’t ignore them lest your restaurant become dirty and unappealing to prospective eaters.

Cooking things in CSD2 on console is a much different experience than it was in the previous games on PC. When using a keyboard, all of the ingredients needed to make the various dishes sensibly correspond to letters on the keyboard. If you need some ketchup, you press K. If you need some mustard, you press M. If your touch typing skills are up to snuff, serving up sandwiches is a snap.

On console however, there’s obviously a much smaller amount of inputs to work with, so the ingredient system is more reliant on muscle memory. There are multiple pages of ingredients to scroll through for complex foods, and each button will always correspond to an ingredient in a certain position. There’s no way to logically assume which button to press, so you’ve got no option but to remember the general placement of ingredients so you can become a lightning fast chef. It takes some getting used to, but eventually I found myself becoming a pro at the controls.

There are also a few mechanics new to the series. Time is money and with only enough room to cook six orders at a time, you want customers in and out as fast as possible. Unfortunately, foods like pretzels require little prep effort but take a while to bake and waste precious space that could be used on foods that need it.

What’s a chef to do? That’s where Holding Stations come in – cook the food in advance, and serving it to a customer is as simple as pressing a single button. You can also use the Holding Stations for side dishes, which take up one of the four HS slots but will increase customers’ patience and are automatically added to any entree order you serve, earning you a little extra cash in the process.

Working jobs at other food joints in the story mode is a lot of fun, but CSD purists can still run their own restaurant like usual. Choose what foods you want to sell, put in an honest day’s work, then use the cash to purchase new foods to add to your menu.

You can even customize your restaurant with furniture and artwork you earn by playing the game – it doesn’t have any effect on gameplay, but it’s nice to be able to spruce up the background you’ll be looking at for hours on end. And while I wasn’t able to test it with anyone, there’s even the ability to play the entire game in two player split-screen co-op, which sounds like an absolute blast.

Perhaps the most significant element of the game that could be easily missed at a glance is the incredible writing. CSD2’s surprisingly large amount of text is secretly hilarious, with a slightly sardonic sense of humor that permeates the entire experience. Each restaurant and food item has a fictional history that never fails to entertain, whether learning about the absurd yet heartwarming tale of the bean burger’s creation or the reason why the MAX Wieners restaurant was sued by a Miami nightclub.

Of particular note, are the emails you’ll receive throughout the game, which detail the mundane yet surreal goings-on within Teragon Tower amidst spam advertisements for things like the upcoming VHS release of “Pi Hard”.

Visually, the game is of two halves. This is not a game you’ll want to play on an empty stomach, because all of the food looks gorgeous. Actually, let me revise that – you’ll probably be fine, but anyone watching you play will be left with their mouth watering.

With how demanding the gameplay is, there’s no time for you to actually look at anything you’re making. Why ogle that delicious sundae when you need to see exactly what toppings the customer wants on it? Instead, you’ll be staring at a lot of the backgrounds and customer art, and they aren’t nearly as pretty as the dishes.

In fact, I’d even say the customers in this game look downright gross, like lumps of clay that have been haphazardly shaped into human-like blobs. It’s a really strange artistic choice given how nice everything else looks, but the rest of the game is so good that I can give it a pass.

I especially like the music, which is kinda chill and jazzy and gets you in the mood to flip patties and clean out ice machines. The title song is the one exception, which just sounds absolutely bonkers and features random voices yelling out “COOK! SERVE! DELICIOUS!” in increasingly odd ways. Perhaps unfitting, but certainly memorable.

If you want a game that combines the responsibility of managing a restaurant with the fun of working in it, there’s no better option than Cook, Serve, Delicious! 2!!. Tons of content, great gameplay, and smart writing come together to make a five-star meal that will have you coming back for more.