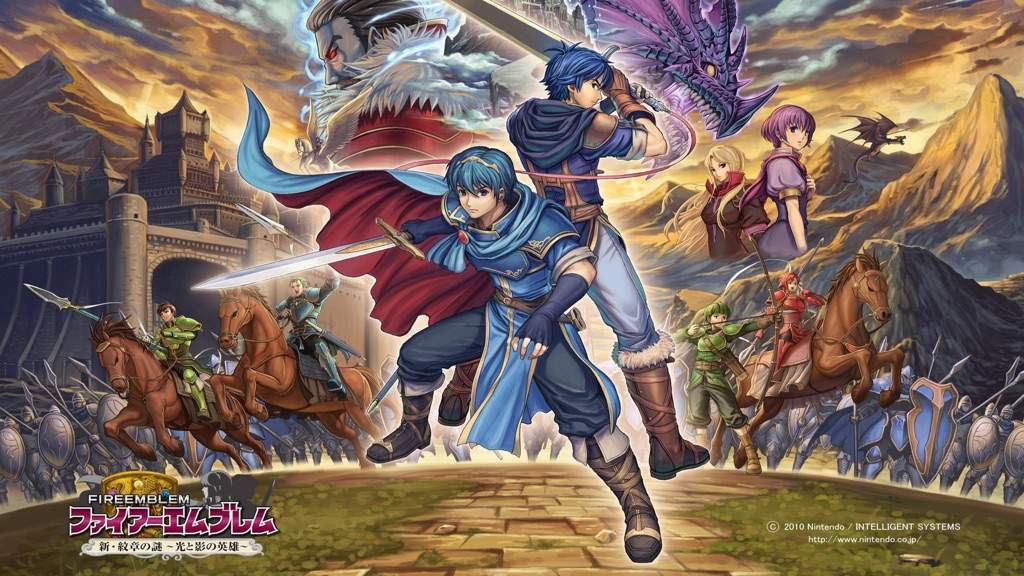 Remakes are hardly a new concept. The Gameboy Advance and SNES both had libraries worth of adaptations, and some might go as far to say that the ports of arcade games to home consoles served as remakes. Remaking games wasn’t always as rapacious as it is today; it helped NES games reach their full potential by utilizing stronger hardware. Fire Emblem: Mystery of the Emblem manages to be both a remake and an entirely new game, but most importantly, it helps define the direction of the Fire Emblem series as a whole.

Fire Emblem Gaiden, like many other RPGs, released late in its console’s lifespan. This NES title released about a year after the SNES was made available, so it isn’t surprising to learn that before Gaiden was finished, Intelligent Systems was already preparing Fire Emblem‘s foray into the fourth generation of gaming.

Mystery of the Emblem wasn’t always meant to be a remake. It continues the story of Marth and the continent of Archanea in a fully fledged sequel. Of course, sequels can be difficult to play without knowledge of prior entries, causing Intelligent Systems to create a pseudo-remake of Shadow Dragon and the Blade of Light in the form of Book 1. Mystery of the Emblem was the first game to make use of the 24-Megabit cartridge, ironically setting the tone of the game development: Use the power of the SNES to adjust the original Fire Emblem formula.

New Mystery of the Emblem begins a few years after the conclusion of Shadow Dragon and the Blade of Light. Archanea has become a powerful empire ruled by Hardin, a seemingly just and appropriate leader. Helping to stamp out a rebellion in Grust, Marth is appalled by the brutality of his Archanean allies. He discovers that Hardin has become corrupted by the Darksphere of Gharnef, and once again begins a journey to save the continent, convincing his former allies of Hardin’s tragedy to incite a rebellion.

While the story of Shadow Dragon and the Blade of Light is mostly untouched, some characters and relationships have been fleshed out, such as that of Marth and Caeda. It’s still the classic story of a hero emerging to defeat a dark power. Fortunately, Mystery of the Emblem has a much better story, though it isn’t as morally grey as Gaiden‘s. Archanea is no longer the weak nation that Marth saves in Book 1. An assertive empire (As once might guess from the negative connotation associated with the word), it is unafraid of ruthlessly stamping out rebellion, impartial to friend and foe.

Marth could easily ignore the atrocious treatment of citizens, yet he does what he believes is right for his nation. His kindness is admirable; he doesn’t retaliate with the sacking of towns and the slaughter of innocents, which ultimately causes his rebellion to grow through the support of Archanea’s people. It’s clear that Marth’s goal is to save his friend from the Darksphere, not to usurp the throne. Even those in the favor of Hardin, such as Sheena and Samson, join Marth after seeing his humanity. Marth’s kindness ensures that the story is one of a thoughtful, selfless hero, not of a truculent rogue who thrives off of conflict.

Though the main story of Book 2 is much different then that of Shadow Dragon and the Blade of Light, its resolution is quite similar. Marth defeats a revived Gharnef and Medeus, who were controlling Hardin through the Darksphere. This isn’t a poor resolution, however, the idea of the main antagonist being controlled by a dark god is a recurring one throughout the Fire Emblem series. It is used well here since the player knows of the kind Hardin from Book 1, making his corruption far more impactful.

Sacred Stones does a decent job with this, showing Lyon as a caring individual throughout various flashbacks. However, the title that utilizes this trope abysmally is Fates. It doesn’t have the proper setup necessary to give the tragedy of Garon’s corruption the impact. Three Houses must be cautious, if it chooses to use this trope, by creating the proper background. Mystery of the Emblem sets a gold standard for the creation of a corruption story, since its predecessor created player affection towards Hardin.

While Mystery of the Emblem only introduces a few gameplay mechanics, it is notable since it defined what a Fire Emblem game is. Gaiden was the stereotypical second entry in the game series: a free radical, experimental, and often considered the “black sheep” of the series. Mystery of the Emblem is what you would expect from a third entry: it mostly reverts back to the original game’s format. This is the Super Mario Bros. 3 or Link to the Past of Fire Emblem.

Battles are the same as they always have been, with armies taking turns to direct units across the battlefield with the omnipresent threat of permadeath looming over their heads. The item system has been adjusted, with Mystery of the Emblem allowing each character to carry up to four weapons and four items. The main new feature of Mystery of the Emblem‘s gameplay is the ability for mounted units to dismount. This changes available weaponry and can be used to adapt to unfavorable terrain. This also helps negate extra damage dealt to specific classes, as is the case with arrows and pegasi. I’m rather indifferent to dismounting as a whole, as it both added a layer of strategy and made mounted units feel less unique. One small change worth mentioning is that clerics can now receive experience from healing their allies. Before, the clerics had to be attacked by enemies to gain any experience. This change is an intuitive one, allowing a class to be rewarded for doing its job.

Perhaps the most important addition to Mystery of the Emblem was one that was entirely visual. This was the first entry that showed unit movement range. A simple addition, it proved to reduce the tedium of planning by allowing players to quickly reference movement distance without manually scrolling through the map to find boundaries. Fire Emblem‘s pacing, the improvement of which being arguably the main focus of Mystery of the Emblem, became far more bearable due to this feature.

The remake of Shadow Dragon and the Blade of Light had to address this pacing issue, otherwise it would be just like the NES title; a chore to navigate that takes persistence to finish. The movement range visuals and the overall speed of the SNES made the experience far more enjoyable the original game ever could offer. Even when disregarding the DS remakes, I hesitate to call this the definitive edition of Shadow Dragon and the Blade of Light, as a few characters from the original, such as Jake and Beck, are excluded here. In addition, a few chapters are excluded, though when factoring in Book 2, the game still has a total of 44.

The new content included in Book 2 is its own game, so the designers had to ensure that the game didn’t become repetitive after 40+ chapters. In general, the new maps reflect the experience the designers obtained from the first two entries. Unique scenarios and puzzles feel less tedious than in Shadow Dragon and the Blade of Light. If a map had a gimmick in the first two Fire Emblem games, it would usually require a slog to complete, not a battle of tactics. Book 2 definitely has a distinctive style when compared to Book 1, making it feel like a true sequel instead of something that would be sold as DLC today.

The visuals of Mystery of the Emblem serve as an intermediary between the tiny, sparsely detailed sprites of the NES titles and the beautiful pixel art of Fire Emblem‘s fourth and fifth entries. The map sprites are small, with a few more features than the NES manifestations, but overall lacking in detail. The true improvement comes in the battle animations. Now, battles have fully color backgrounds and character movement is far more extravagant and fluid. This change is one that comes naturally as a series evolves, and most entries since have had this level of detail.

The entire soundtrack of Shadow Dragon and the Blade of Light had been redone with the SNES’ sound system. This gives it a mellower tone, making the music far more enjoyable. The soundtrack of Book 2, like most aspects of it, is a bit more eccentric than Book 1’s. The composers took advantage of the advanced music capabilities to create many varied tracks. Tracks such as Hardin’s battle theme stick out in my mind for conveying much more emotion than NES tracks ever could. The great news is that the music is only going to get better from here!

Mystery of the Emblem‘s legacy simply comes from the fact that it cemented what is part of core Fire Emblem gameplay. Gaiden‘s weapon/spell system and map traversable were removed, making way for Shadow Dragon and the Blade of Light‘s traditional gameplay to return. The overall balance changes added in Mystery of the Emblem would stay with the series. Dismounting, the most obvious addition to gameplay, would only be present in two other Fire Emblem games, which I believe was done because the system was generally neglected, even if it was an interesting concept.

Three Houses seems to be a bit more traditional than the 3DS Fire Emblem games, with less avatar customization and a focus on pre-established characters. It’s safe to assume that much of Mystery of the Emblem‘s gameplay will be found in the Switch’s first Fire Emblem, though maps will likely be traversable.

Fire Emblem: Mystery of the Emblem may not add much, but it helped define Fire Emblem. The story showed the potential of sequels, utilizing the first tale of Archanea to make the new one impactful. There is a DS remake available, but that is also only available in Japan. If you intend to emulate, there is nothing wrong with playing this version of Mystery of the Emblem.

The next episode looks at one of the most beloved entries in the series, and a personal favorite, Genealogy of the Holy War.

One thought on “[Feature] Fire Emblem Frenzy #3: Not Too Mysterious”