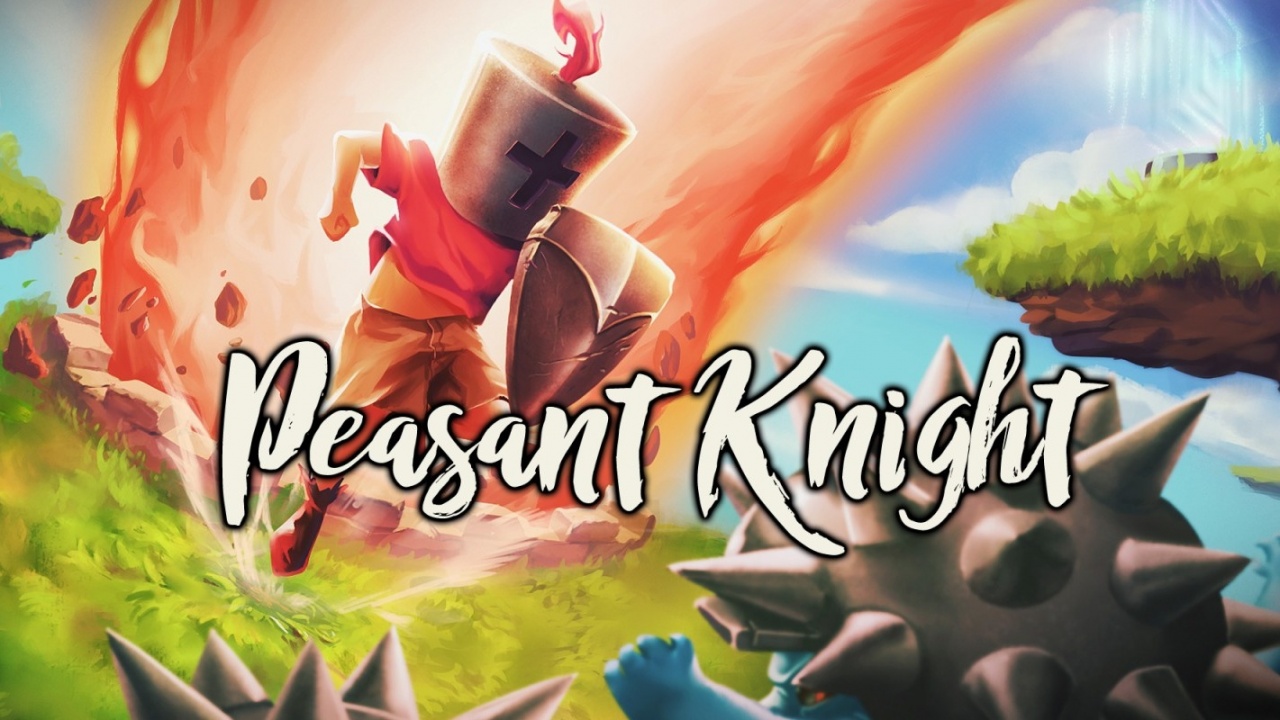 I frequently hear the complaint that the Switch is in a drought, a claim that will probably sound bizarre to anyone who reads the constant deluge of reviews that drop on this very website. We’re in such a “drought” that I find myself discovering a new eShop game that looks interesting nearly every week.

These naysayers of course, are probably only looking at big budget AAA releases, but I find that the greatest treasures are often in the smaller, low-priced games that struggle to break out from the pack. From Safety First! to kuso, some of my favorite Switch games are those unassuming indies that only cost a few bucks. Peasant Knight is not one of those games!

The term “programmer art” is often used to describe graphics that are visually unpleasant but completely functional, created not by an artist but by a programmer who cares less about how nice their game looks and more about how it functions. Peasant Knight has what I would call a “programmer story”. In a brief five-panel comic, you’re informed that an evil wizard (literally named Evil Wizard) is doing something vaguely bad, and the titular Peasant Knight has set out to stop him.

Once the game begins, it becomes clear that the story isn’t the only thing that’s been slapped together, as the visuals are utterly barebones. The music is comprised of medieval-sounding tunes so generic that a stock soundtrack stuffed with Kevin Macleod melodies would have been an improvement, and every stage in the game is set on the same cheap blue background with the same handful of clouds floating near the top as you run along the same grassy blocks and dodge the same fiery blasters.

I understand that hiring a professional artist to create some high-quality graphical assets probably wasn’t in the budget, but as an artist myself I can tell you right now that it doesn’t cost any money to click that paint bucket tool and crank out a couple of palette swaps to provide a modicum of variety.

Obviously, no one is buying this for a visual or aural tour de force, but anyone expecting depth to the gameplay is bound to be equally disappointed. Peasant Knight is an auto-runner with two buttons: stop, and jump. Holding backwards on the D-Pad to stop your forward momentum is the crux of the gameplay, so it sucks that it feels very unreliable.

Your knight refuses to stop on a dime and always seems to go slightly further than you wanted, so you’ll frequently die to things not because you didn’t see them coming, but because the game simply didn’t do what you wanted.

That’s not to say you won’t die to things you don’t see coming though – you will, and often. Upon starting every stage you’re given the option to scroll around the map to see what obstacles lie ahead, but even so, you’ll frequently get killed by things that you simply weren’t expecting thanks to the slow screen scrolling.

From enemies that charge you, to portals that drop you off an edge, to lava that burns you if you stand on it too long, Peasant Knight packs a decent number of tricks and traps into its stages that slowly get introduced as you play.

There are 80 levels in the game, which may seem like a lot but is decidedly less impressive when you learn that they can all be completed in fewer than 30 seconds. In fact, you have no choice but to complete them quickly, as dawdling too long on a stage will cause lightning to strike your knight with extreme prejudice. The first 25 levels or so might as well not even exist, as they’re extremely easy and I blazed through them on my first try in roughly 5 minutes. After that, the stages tend to get more complicated than fun.

A good auto-runner tests your reaction time and platforming skill, but Peasant Knight just requires you to memorize what you’re supposed to do at any given part of the level and execute the sequence flawlessly. I gave up on Level 63, in which I was expected to hop onto a moving platform and do a complicated maneuver to avoid hitting a hazard four times in a row. After more attempts at doing this than I care to admit, I decided that perhaps thwarting the Evil Wizard would take more effort than I care to put in.

There are a few interesting levels, namely the boss battles that sporadically appeared. One of them required me to run past a skeleton that smashed his fist and jaw into the ground to crush me in different ways, and it’s probably the only level where I feel like the game’s potential was actually reached. If only the entire game had been filled with interesting gimmicks like this instead of annoying trial-and-error death runs.

Peasant Knight offers two-player co-op and competitive play to experience the campaign with a friend, but that’s it in the way of extras. What you see is what you get, and in this case, it’s simply not a whole lot, as the whole game can be beaten within two hours and on a storefront with no shortage of short yet cheap experiences, there are far better choices than this one.

Peasant Knight isn’t a bad game, it’s just a mediocre one. If the Switch truly were in a drought, maybe it would be worth a buy – but it’s not, so just seek out one of the many other quality games on the eShop instead.