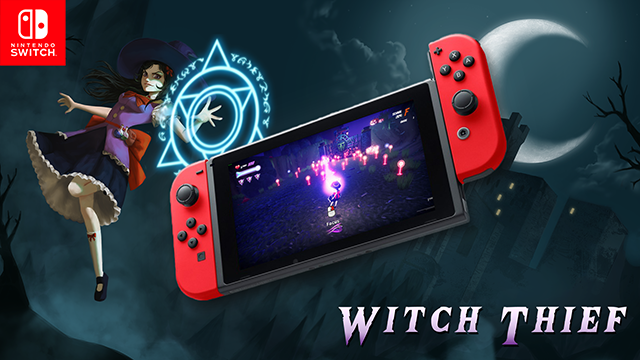 Witch Thief Will Be Enchanting Its Way Onto Switch This April

Cardboard Keep have announced that they are bringing their game Witch Thief over to the Nintendo Switch. Witch Thief will be available to purchase digitally on the Nintendo Switch eShop on April 19th. The game is a bullet hell shooter that puts players in the shoes of a sassy Witch on a quest to get her hands on a fabled Grimoire.

You can read more in the announcement below as well as a trailer.

Canberra, 11 April 2019: Cardboard Keep today announced Witch Thief will be arriving on the Nintendo eShop for Switch on April 19th.

On a quest to steal an enchanted grimoire, a snarky sorceress embarks on a dangerous journey through five distinctive, perilous zones, surviving arena-based ambushes by possessed dolls and arcane bosses. Naturally the tome’s guardians won’t give it up without a fight, so our heroine must do what she does best: that is, sneaking in the front door and stealing it from under their noses.

Players can unlock three more playable and equally feisty witch heroines with different powers, each with a personal story told through unique dialogue, entwined inextricably with the Witch Thief’s own tale.

‘We focused on bridging the gap between hardcore shmup and a more relaxed, story-driven experience. On the tougher difficulty levels, this will tax the most ardent bullet hell fans – but drop into “Chill Mode” and it’s a blast for players who want to explore the witches’ stories while developing their skills,’ explains Tim Bermanseder, co-founder, Cardboard Keep and project lead on the game.

Each witch has her own reason for seeking the ancient grimoire, and players will experience journeys of redemption, betrayal, bravery, wisdom, corruption and possession in their hunt for the charmed tome – and the mysterious doll maker…