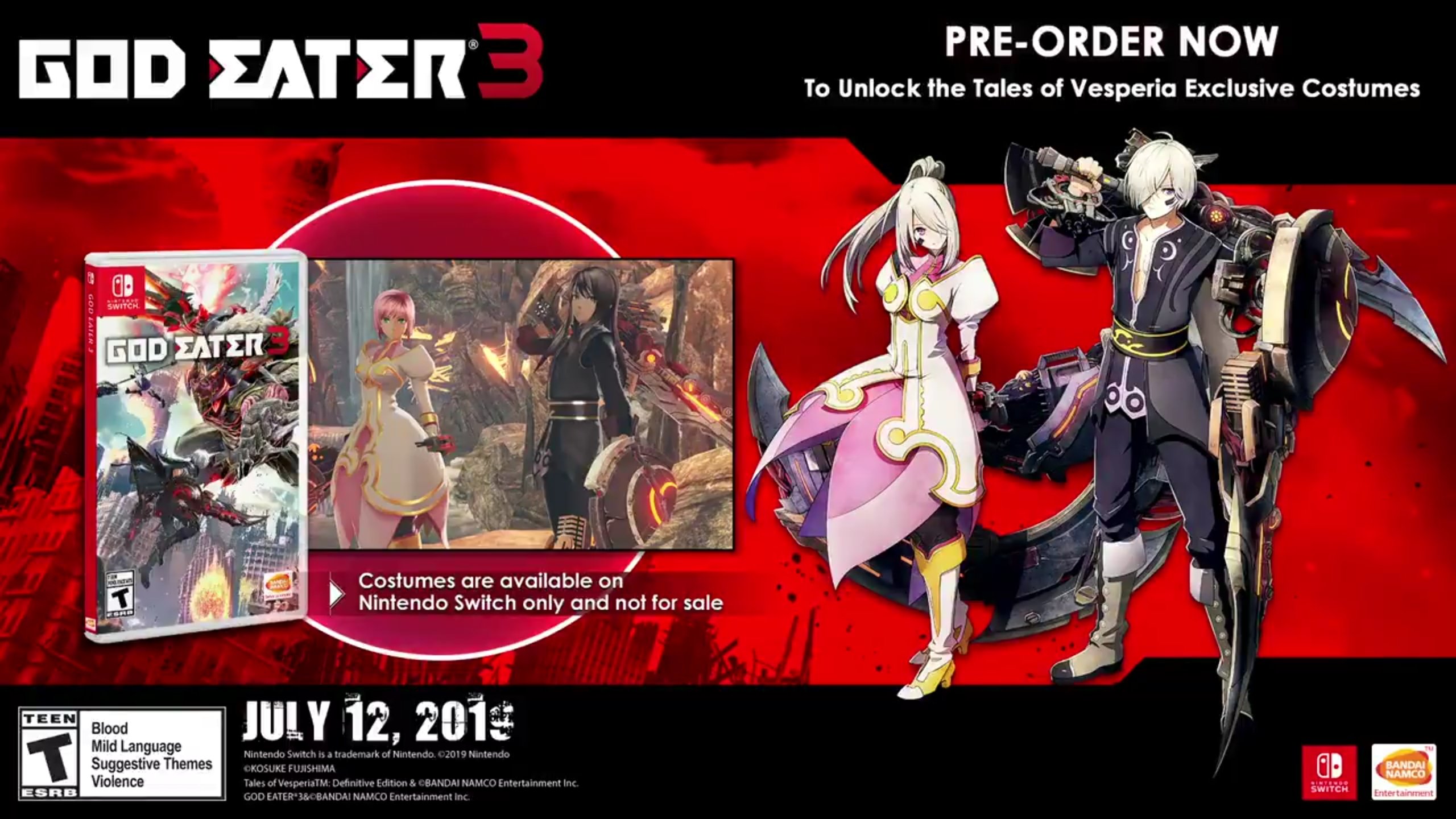 Quick! Put your hands beneath your jaw, because it’s about to drop! Bandai Namco has revealed that a Switch release of GOD EATER 3 is on the cards after all and on July 12, it will release worldwide for Europe, North America and Japan.

What’s more, players who pre-order GOD EATER 3 will also be able to obtain exclusive pre-order items, which come in the form of TALES OF VESPERIA: Definitive Edition costumes for Yuri and Estelle. The full announcement can be seen here:

Defeat Terrifying Aragami Monstrosities Together with Friends Anywhere at Anytime

SANTA CLARA, Calif., (April 11, 2019) – Leading interactive entertainment publisher and developer BANDAI NAMCO Entertainment America Inc. today announced that it will be bringing GOD EATER® 3 to the Nintendo Switch™ on July 12, 2019. Players will be able to team-up with friends on-the-go to topple massive beasts known as Aragami in this fast-paced monster-slaying action game.

Join the elite force known as God Eaters, imbued with the unique ability to wield God Arcs, specialized weapons to take down the nearly indestructible Aragami threat that has ravaged the planet. God Arc weapons can come in a wide variety of melee and ranged type capabilities featuring swords, hammers, sickles, spears, shotguns, sniper rifles, and more. Each weapon also comes with unique transforming functions, extending their utility by providing additional attack options to deal more damage. Players can determine which weapon works best for their playstyle and hone its intricacies when taking on missions in Story Mode or online with other GOD EATER 3 players.

GOD EATER 3 incorporates new combat mechanics and customization options to create dynamic fights that change the flow of battles. After devouring an enemy, players can activate Burst Arts which change some of normal attacks into special attacks. Players can also choose between several Burst Arts, as well as the specific effects of the Burst Art, to suit their play style. In addition to Burst Arts, a new Dive ability increases the speed of combat by having players race headlong towards enemies for swift attacks, keeping constant pressure on the opposition.

“The Nintendo Switch opens up new ways to experience GOD EATER 3,” said Jackie Simmons, brand manager for BANDAI NAMCO Entertainment America Inc. “The portability of the system means players can meet anytime anywhere to band together and bring down monstrous threats. The platform also enables players to take GOD EATER 3 on the road, so they’re never far from adventure and fun!”

Players can team-up with three other God Eaters either online or through a local connection to tackle story missions together or combine forces with seven other players online to experience Assault Missions, the largest group battles ever seen in the GOD EATER franchise. Cooperating and fighting as a team will help engage the Battle Support System. By fighting next to teammates, players can unleash this new ability which shares various power-ups to help the entire team overcome tough fights and secure victory.

GOD EATER 3 for Nintendo Switch will also receive exclusive pre-order items in the form of Yuri and Estelle costumes from TALES OF VESPERIA™: Definitive Edition. Pre-order now at participating retailers.