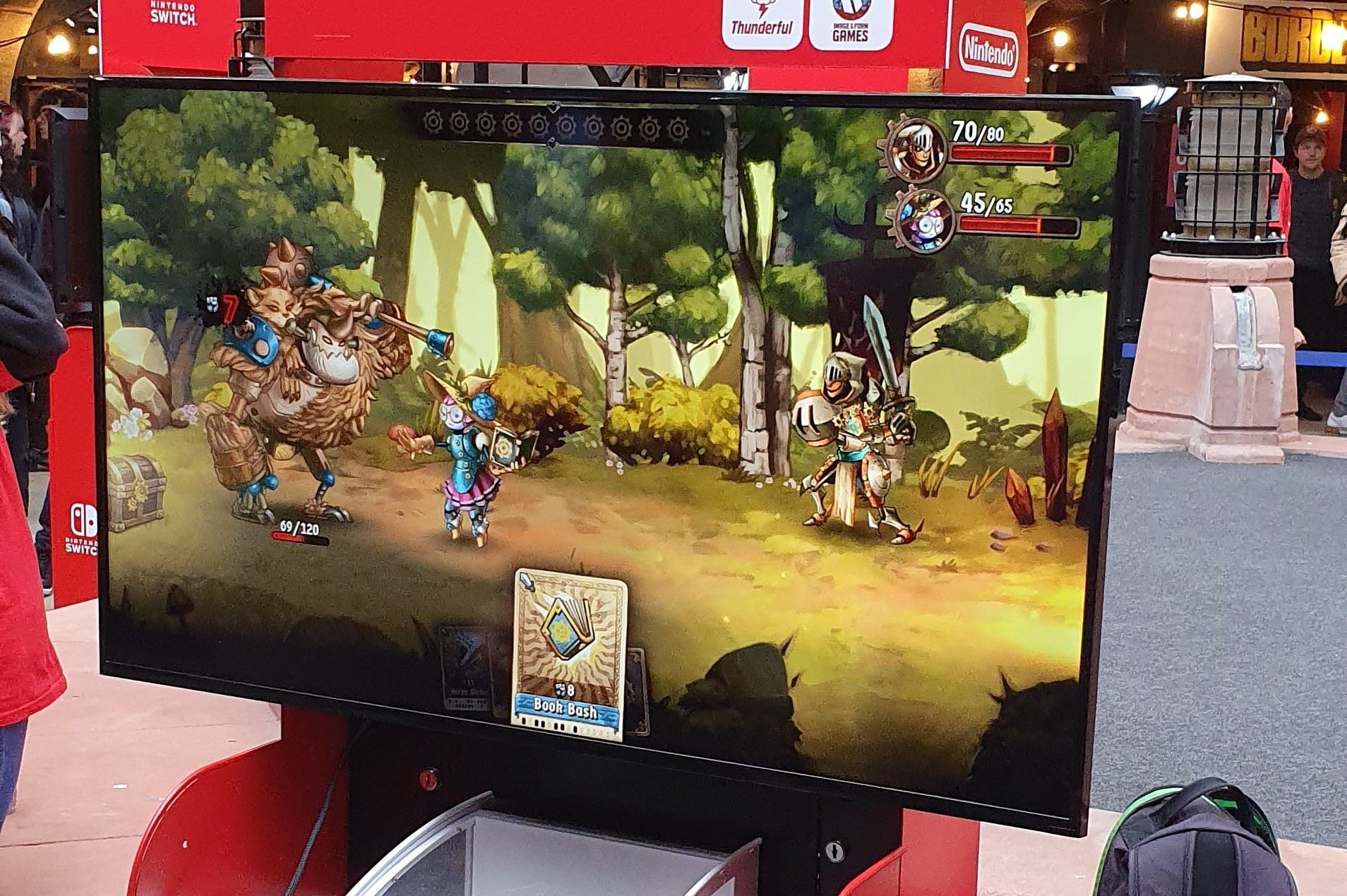 Hey guys, Jack here! When SteamWorld Quest was first revealed earlier this year, I had the chance to interview Brjánn Sigurgeirsson to learn more about it, but that was back in January and a lot can happen in three months.

Because of that, with Kieran Fifield, aka Nintendad representing Miketendo64 at EGX Rezzed this year, not only did he get the chance to play #SWQuest ahead of its release, he was also given the chance to chat to Julius Guldbog and now that the whole thing has been typed up, here is the full transcript:

Nintendad: Hi Julius thanks for joining us to talk about the latest title from Image and Form.

Julius Guldbog: Thanks for having me. And please feel free to ask me anything. If I can, I’ll happily answer.

Choosing which Path to Take:

Nintendad: So SWQ!! Everyone asked for an RPG set in the SteamWorld universe and you duly delivered. Can you tell us how you decided on SWQ as your next entry?

Julius Guldbog: We heard the fans feedback and it was something we were quite eager to do anyway. When we decided to go forward with it, the whole project came together quite quickly. Once we found a gameplay style we liked, the team really got to work and the whole project was ready in 9 months or so.

Nintendad: Whilst not quite as fanatical as the Zelda timeline nuts, people can get pretty passionate about the SteamWorld timeline. Where does SWQ fall into it?

Julius Guldbog: Oooh good question, [Turns to Petter: ‘Can we talk about that? Is it canon? It is, ok’] While we don’t want to give anything away, once you’ve played through SWQ, you will know exactly where it falls in the SteamWorld series.

Nintendad: SWQ will be a timed exclusive on Nintendo Switch. What was the main reasoning behind this? Was it reflective of previous SteamWorld games sales on the system, or due to the support you’ve received from Nintendo along the way, or did they simply give you a massive bag of cash and say, make us a game….

Julius Guldbog: When we decided to make SWQ, we immediately knew that we wanted it on the Nintendo Switch. We’ve always had a great relationship with Nintendo; we’re incredibly lucky to be in regular communication with them, and as such, bringing it 1st to the Nintendo Switch seemed like the right thing to do. We’ve actually only worked on it for Nintendo Switch, on PC’s and then testing everything with the Nintendo Switch dev kit to make sure it runs as it should.  Because of this, the timed exclusivity will run for at least 2-3 months.

Nintendad: So what can you tell us about the game? Will we be seeing any familiar faces from past games popping up or is it entirely its own beast?

Julius Guldbog: We’re really proud of this entry and can’t wait for you all guys to get your hands on it. It’s really story driven this time, unlike anything we’ve ever done. If you’ve played SteamWorld Heist, you’ll be aware of all of the hats that you can collect throughout the course of that title and the descriptions they all have.

The guy who wrote all of those for us, as it turns out is an accomplished screenwriter, so he wrote the dialogue this time out and it’s made for a really funny script that grows and develops as the game progresses. Talking of which, it’s out longest title yet, and will clock in at around 20-25 hours, depending on how you approach it.

We’ve added three difficulty levels; Squier, Knight and Legend, so if you’re finding it too challenging, you can turn the level down, or vice versa. The game is obviously very combat focused and utilises a card deck. There are over 100 unique cards available for our anti-heroes to use. I call them anti-heroes as they are all losers and misfits. It really is a lot of fun getting to know the party members.

Nintendad: With Nintendo’s announcement that 2017’s GOTY BotW will be playable in its entirety in VR, I guess my question is, when will we see a VR SteamWorld experience?

Julius Guldbog: Haha. It’s actually something we very briefly touched upon. Nintendo really held their cards close to their chest with that announcement. We were speaking to some people over at Nintendo of Europe earlier who knew nothing about that until the news became public. It was the same with amiibo, when that first came around, nobody knew that Nintendo would license out the technology and allow for indies to make their own amiibo (which is ultimately what happened with Shovel Knight).

So, to answer the question, if we could find a way to make either Labo, or VR add to the experience, it’s certainly something we are willing to try. The same goes for amiibo.

Settle it in Smash:

Nintendad:  So… Rusty for Smash? Also, who’s your main?

Julius Guldbog: We would love to have a SteamWorld character in Smash, be it Rusty or Dorothy, or both with them simply being different skins – the move-set is similar enough. I think at this point, regarding Smash Ultimate, Nintendo knows exactly who all of the remaining Fighter Pass characters are and on this occasion, it’s not Rusty. Although, I’d probably say that even if it were….

As for who I main, wow, the roster is so huge, everyone really is here. My original mains are Ness and Mr. Game and Watch but I really like the modifications that they’ve made to Bowser and King K. Rool is just a wonderful addition. That B neutral, pfft, it’s insane!!! Piranha Plant too. I really didn’t see that coming but he’s such an accessible character for newcomers and just a whole lot of fun to play as.

Nintendad: What is next for Image and Form after Quest?

Julius Guldbog: Once we’ve sorted out bringing the game to other platforms; Steam, Xbox and PlayStation will be next, we have a few ideas on where to go next. SWQ, as I mentioned earlier really is a story driven game and it really expands the SteamWorld universe in exciting new ways.

DLC is something that we are exploring, and we’re always looking ahead to the next project, so a new IP isn’t off the table yet. Saying that, we’ve had so many requests for Heist 2, Dig 3 and even a few already for Quest 2. [Laughs]

Thanks for taking the time to talk to us today and for sharing what is once again shaping up to be another masterpiece from Image and Form.

Julius Guldbog: Thank you so much for your kind words and on behalf of everyone at Image and Form, we really hope you all enjoy your time with SWQ.

And thank Nintendad for attending EGX for us in the first place!