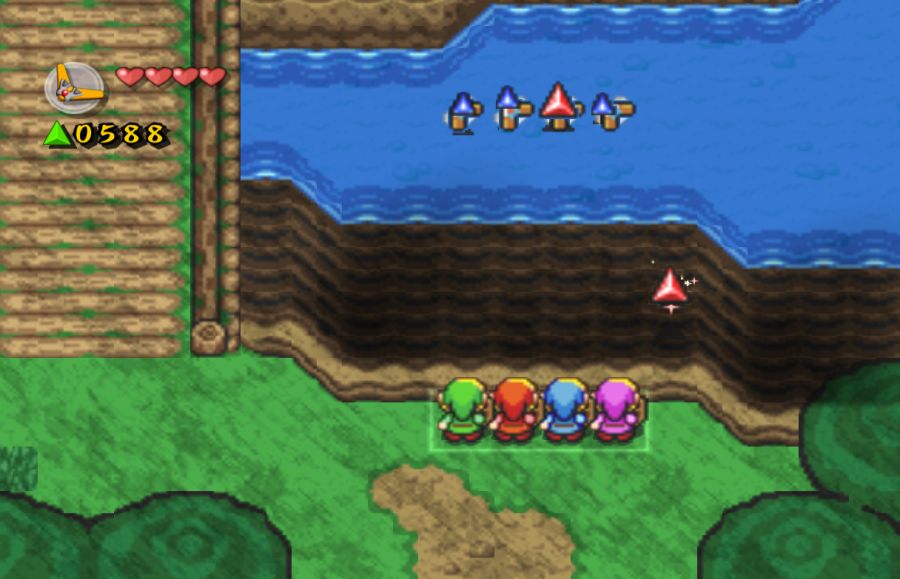 Therefore, it is unfortunate that The Legend of Zelda: Four Swords Adventures is so frequently overlooked. Unquestionably, the reasons behind that obscure character are perfectly understandable. After all, it is a relatively straightforward and low-key 2-D adventure released on the same console, and right in between, two excellent tridimensional giants of the franchise; and it is a game whose very best state – that is, its multiplayer action – can only be experienced through very complicated means, which involve finding four Gameboy Advance systems and the cables that connect them to the Gamecube. However, below that simplicity and those marginal complications lies a quest that is still a lot of fun even if tackled as a single-player campaign. It is true some of its production values are a bit lackluster when put under a comparative light alongside other The Legend of Zelda installments; and it is equally clear its gameplay stumbles in a couple of areas. Yet, its surprisingly varied stages and, especially, the way it uses the availability of four different Links to uncover unique cooperative puzzles and frantic battles make The Legend of Zelda: Four Swords Adventures very enjoyable.

via The Legend Of Zelda: Four Swords Adventures — Nintendobound