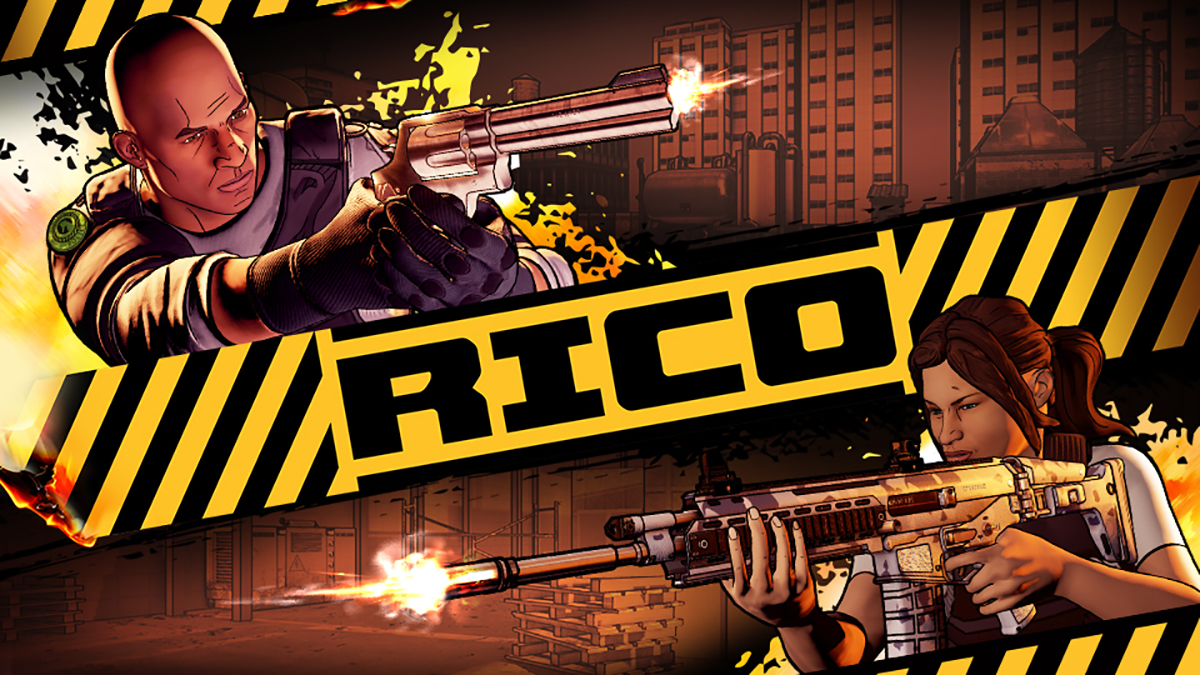 Ready for an endless mission buddy-cop shooter? RICO has you covered.

The basic premise of RICO is that you play as one of a few select operatives that have been labeled as unstable or difficult to work with, but you get results.

The missions you will be undertaking are essentially suicide missions to eliminate the threat of organized crime syndicates, which are being investigated under the RICO act, (Racketeering Influenced and Corrupt Organizations act) that enables the United States to prosecute those leaders/high ranking members, of organized crime families that haven’t necessarily committed crimes themselves, but ordered them to be carried out. As such, you are permitted to use lethal force to eliminate the threat.

Each squad member has their own backstory and personality that is really just told through case files, but have no discernible mechanical relevance. While there is a narrative interlaced between the assignment and completion of missions, it isn’t really too engrossing or important. The meat of the game lies in the gameplay itself, and the exploration of the premise as carried out by you, a local partner, or an online player.

Unfortunately, for my review period, I was never able to successfully join an online match, so cannot cover that aspect of the game. I imagine the longer the game is out, or if you have friends that also purchase the game, it will be easier to find someone. I did have the opportunity to play in local co-op mode, however, so I will go into that after I cover the basic gameplay.

RICO is built upon the backs of buddy-cop movies and television shows, yes, but instead of resting on its laurels of having a single narrative case history that takes players along a chase of linear plot point progressions and meticulously planned locations, it instead relies upon the ability to have an endless case file built on the backs of procedurally generated locations with varying mission goals.

While this lack of specifically plotted out points makes the narrative feel loose and can lead to some frustratingly long load times as the world generates, it doesn’t take away from the overall enjoyment of the game itself. While you can do a case file by yourself or with a local friend, there are also quick missions and daily cases to be cracked at your discretion. This definitely lends itself to a lot of content to be experienced.

The big drawback here is that because of the limited range of possible locations and interior set dressing, some of the missions can start to feel samey pretty quickly. Differing objectives and a rotating cast of criminal type character models can help with this to an extent, but every so often you will run across a situation where a mission will ask that you clear out the building of criminals, and all 24 of them are the exact same model.

The AI is programmed to mostly follow the same scripts (shoot at you, duck and then shoot, then run towards you, stop, and shoot some more). While this also helps to contribute to the samey feeling in extended play sessions, it also helps you recognize the patterns of enemies more readily and respond appropriately. To still keep a little edge on the difficulty, you will have enemies that spawn at different stages of these scripts, so you might have to change up your style on the fly to compensate.

While I’ve seemingly been a little hard on the game leading up to this point, I merely wanted to get the bad out of the way before I got to the good. RICO is a fun, mostly mindless shooter. It is played best with a local buddy, and the marketing department for the game knows that.

Every bit of material I have seen for the game sells the buddy-cop connection harder than anything besides the procedurally generated levels, and it was a very smart move. I convinced my eldest daughter to play with me, and while she was apprehensive about the game, at first, we quickly found our groove working together and started having a lot of fun very quickly.

Communicating with each other about where enemies were beyond our personal line of sight became one of the more satisfying experiences in RICO. While the horizontal split screen gives you a pretty decent field of view (local co-op doesn’t work in handheld/tabletop mode), you can’t always see where the shots are coming from and having your partner be able to scope your blind spots and vice versa is essential to staying alive.

Also essential to staying alive are adrenaline packs that can be found around the level. If your health drops to zero, you are put on the floor in a greyed-out mode that makes you unable to move, but still gives you the ability to shoot enemies that are on their feet. You have a countdown timer in which you can administer an adrenaline shot to yourself (or a partner can give you a shot, too), and learning to game this countdown timer to eliminate the threats before getting yourself back up is key to successful mission completion.

You and your partner are given free reign to go wherever you want in any given location, but in most cases, it is best to stick together for the reasons mentioned above. Another good reason to stick together is the fact that when you clear a location of all objectives, there will sometimes be a horde rush of reinforcements that try to block you from exiting, and it’s easiest to fight your way out with your partner.

Other times, you will be tasked with defusing bombs around the building in a set amount of time before you blow up, at which point you will absolutely need to split up. The last drawback to the game that I will mention is that sometimes it can be hard to remember where your entry point is so that you can escape in a timely manner, but I’m also one to get easily disoriented in first person perspective games, particularly ones without a super accurate map. You have limited ammo, but enemies drop it at a pretty regular interval.

Controls in RICO are pretty standard first-person shooter fare, left stick to move, right stick to aim, ZR to fire, ZL to target or zoom, hold A to interact, tap A to crouch, B to administer adrenaline, Y to reload and X to kick open a door. Every so often the game will put you into a bullet time mode where it is easier to take out the enemies with headshots before they can get the drop on you, and the key to this is adjusting the right analog sensitivity to suit your aiming style.

The game defaults to a 50, but I found it worked best for me on a 70ish range, while my daughter favored the default setting. The 100 setting was just too whip-fast for me, but others that are more experienced or if I practiced more would probably find this advantageous because of the speed you can switch between targets.

The cartoon-like cel-shaded graphics help the game run very smoothly, and it helps you keep your enemies from overlapping and they stick out from the backgrounds more readily. I think they look great, but a lot of people may not be a fan.

The stark black outlines really improved the experience for me, although I do think the game had too much of an off-white washout in the backgrounds themselves that kept them from being overly interesting to look at, although I’m sure this also contributed to keeping the frame rate smooth and the load times as minimal as possible.

RICO is not the next best online shooter, but for an indie outing, it is a hell of a ride to play with your buddies. Missions typically don’t take longer than five minutes, so it would be easy enough to set up a rotating line of buddies rotating through games as you complete the missions. I found the Pro Controller to be the preferred way of playing, and the GameCube style controllers were…manageable after a bit, but the Joy-Con Grip played well for my daughter.

If you’re into couch co-op and need a fun game to kill some time in between Mario Kart circuits, or just looking to shoot some bad guys, RICO is a must have. If you’re playing solo, the biggest selling point is that the Nintendo Switch isn’t exactly swimming in first person shooters as of yet, even if the triple A games on offer are absolutely amazing.