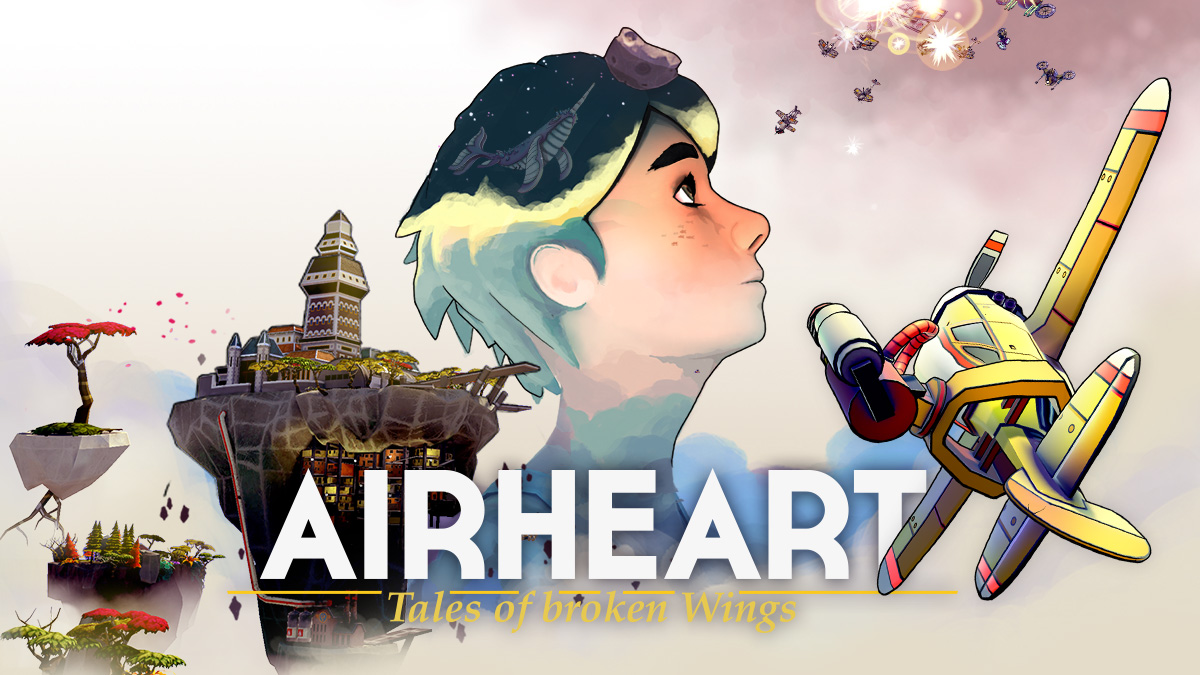 Blindflug Studios, who previously developed and published a handful of PC/Mac Steam games, as well as a few iOS/Android mobile games, now takes to the skies on the Nintendo Switch with their newest game Airheart. Airheart plays from a top-down perspective and features roguelike gameplay elements, crafting, and action as you pilot young Amelia up, up, and away into the stratosphere after the elusive skywhale.

In Airheart you navigate through a vertical flying world, Granaria. Your main job is to harpoon or collect flying fish in each level of Granaria’s floating cities while shooting space pirates and avoiding crashing. As you gain experience in each encounter in the world you will also gain funds to upgrade various aspects of your plane, making you stronger and able to withstand the punishing enemies you will meet along the way.

You play as Amelia, a young pilot and inventor, able to craft junk into usable upgrades for her airplane. With each flight into the skies above you will need to hoard pieces of junk left behind by crashed enemies, found within the trees of the floating islands, and recovered from secret rocks that are able to be shot at.

With each pass through the skies of Granaria the risk-reward trade offs increase. Do you risk your precious cargo you’ve stockpiled by venturing further into the sky and risk crashing and burning at the hands of your enemies, or do you fly home early to ensure that your time and the haul of junk you have don’t get wasted? The gentle tug and nudge of Airheart is one of it’s best qualities as the chance to get better stuff or lose it all is a fine line and balancing act in and of itself.

There’s not much told to you the gamer as far as story goes. In the beginning outset of the game you are tasked with finding the skywhale, but in the beginning that goal seems very far off. As you take to the skies and adventure around you will slowly start gathering fish and oil drums which can be sold and used for upgrades to your plane. With each successful run, there is a sense of progression, even if the progression seems slow and repetitive, which is the nature of most roguelike games.

The game is broken into two main sections. You have your workshop, which acts as the hub for the game. Within the workshop you have your hangar, workbench, and shop. The hangar is where you store the pieces of your plane and choose the various chassis, engine, wings, and weaponry to outfit your plane before heading off on another flight. Each piece of your plane changes the stats for hitpoints, mass, damage, alt. damage (if you have a plane capable of a first and secondary weapon), agility, speed, and fire rate for each weapon respectively.

Along with the variety of stats, there are active and passive abilities for each plane based on some of the pieces you can swap out. Those abilities act as small power-ups you can activate which may increase weapon damage, shields, speed, and more. Each ability has a cooldown period and should only be used to get out of heavy dogfighting situations as either an offensive last stand or to get out of trouble.

Airheart has a ton of content when it comes to the abilities and upgrades you can outfit your planes with. The main hook in the game is to collect all the pieces which will take a lot of time and a lot of grinding in the game. There are six planes in the game each with varying levels of speed, durability, and special abilities, which can also be augmented even further by swapping in and out of various weaponry, engine, and wings.

Lastly, each plane also has an alternative paint job that is just for show and is somewhat reminiscent of paint jobs from the F-Zero series on the Gamecube. After you are satisfied with your planes loadout you can leave the hangar by hitting plus on the gamepad. I will cover that section of the game below after I talked about the rest of the workshop section of the game.

The Workbench has to be one of the most confusing parts of Airheart. When you down an enemy plane or frigate, or possibly find an item hidden in a box in the trees, you end up with pieces of junk from: basic scraps, metal works, pyrotechnics, ammo cases, mechanisms, and advanced parts.

In the early goings on of the game you usually end up with very basic scraps which then you can add to your workbench and craft in hopes of discovering a new item. The way you craft in Airheart though is a bit of a crapshoot in that you need to follow instructions for new items using color-coded circles which apply to the various junk categories.

Each item in the workbench requires three or four types of junk found in the world. The only hint you have to this is the color-coded circles mentioned above. Each time you attempt to craft an item you get either a tan circle or red ‘X’ indicating if the item you’re using is correct in the process of crafting a certain object. The workbench minigame for crafting is basically a version of the board game ‘Mastermind’ in which you’re guessing a color combination for each crafted item.

The Shop in Granaria is where Amelia can purchase plane upgrades and skins to outfit her selection for her plane’s body, wings, engine, and weapons. The items in the shop come at a huge cost. In Airheart you get money by capturing flying fish which are scattered throughout the various levels, as well as oil drums which can be gotten by shooting down larger pirate frigates or found randomly dropped by enemy planes, towers, and secret rocks. Going to the shop was a constant reminder of how much of a grind the actual flight portions of the game can be, especially if you are being patient and working towards a high priced item.

Once you take to the skies in Granaria you have a few things you can do. You can venture all around the sky level you are on and reel in fish using your harpoon gun, flying over them, or engaging in dogfights with enemy planes.

During the lower levels of Granaria you will come across both enemy and friendly fliers. Friendly fliers have blue heath meters circling their planes whereas enemies have reddish orange health bars. Since Airheart is a rogue-like the placement of fish, enemies, discoverables, islands, and the launch pads which send you to higher levels are all random.

Airheart is a twin-stick shooter which means that piloting your plane is done with the left joystick, while aiming your gun is done with the right stick. Controls are mapped to the following buttons but can be changed in the options. Y button is for interacting with certain items and selection within the workshop. The X button switches weapon during flight, if you airplane has two different turret options. The L button reels in the harpoon when you spear a fish or latch onto an enemy ship. The ZL trigger shoots out your harpoon. R button activates your special ability which change based on which chassis you choose. ZR is used for shooting your selected gun. If you are low in health and don’t want to risk losing all of your items, you can press down on the D-pad to return home to your workshop.

With each flight you need to plan out how you will go about capturing fish, shooting or evading enemies, and when you want to venture higher or retreat to your workshop. When flying you need to manage your health which as it lowers you will start to smoke and soon a steady stream of fire will bellow from your plane.

Scattered around the level are health pickups which restore a small portion of your ships health points. Sometimes you will find these as random drops from enemies as well as in glowing golden trees.

Along your flight to the top, you will encounter a range of enemies from speedy aerial dogfighters, towers that bombard you with bombs, frigate airships that are covered with turrets and defense shields and more. You can engage with fighters individually head on or lure them or harpoon them towards you, or you to them if they are larger.

Some enemies also have red fuel canisters which can be shot which explode and cause more damage. Those same fuel canisters can be harpooned and swung around into incoming enemies which can make for some hilarious explosions during battle sequences.

Visually Airheart has a whimsical and steampunk blend of the natural setting of the sky world meshed with the industrial flyers and machines that encompass it’s higher altitudes. The islands that dot the world are covered with rocks and trees and vegetation, the fish of Granaria vary in size and bright vibrant colors as well as translucent jellyfish and octopus. Enemy planes and ships are varied enough and since they are randomly generated each flight to the top differs from the types and sizes of the ships you will come in contact with.

Airheart doesn’t have much in terms of sound track, but you will hear a lot of bullets, bombs, missiles, electricity attacks, and more raining towards you in traditional bullet-hell style. Explosions and firefights are bombastic.

The sounds of your plane crashing towards your workshop after a fire breaks out chars the air around you and you get a real sense of danger if you’re about to end a run in flames. Overall Airheart does a decent job in the audio department, even if it lacks in a noteworthy score or overworld theme that sticks with you.

I liked a lot of the aspects of Airheart and hopefully it shows in my review. But one thing I can’t help but think of is the grind that the main gameplay can be. And ultimate whether or not that plays out to be something you will enjoy.

If you like unlocking and crafting pieces of airplanes and constructing a flyer that is unique to your gameplay style, then Airheart has a lot of content for you. If you like twin stick shooters, but want something different, Airheart has that too, but if grinding for the end game goal and the rogue-like aspects of always different do not jive with you, then Airheart will ultimately leave you a bit empty.

Most video games have a general notion that you will do something over and over and over again throughout your hours with that game. This is known as the gameplay loop and while Airheart has a gameplay loop with roguelike elements added in, does it really bring enough newness and uniqueness to warrant a fly through its skies? For me, the answer is yes, but with trepidation.

The game is decent and has a lot to offer, but its loop becomes tiresome maybe a little sooner than I had hoped. By the end, I just wanted to finish the game and write my review, because after a few short hours in I had seen all that the gameplay loop had to offer and that was repetition and boredom.