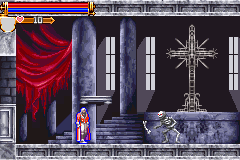 Castlevania: Harmony of Dissonance does have a couple of issues that make the size and complexity of its scope, which are undeniably its biggest qualities, not be as thoroughly delightful as they could have been. Still, by implementing punctual improvements in areas where Circle of the Moon was lackluster, and by embracing the intimidating value of its twin castles and turning the navigation of its map into its biggest source of challenge, the game succeeds in presenting a very satisfying and somewhat original take on the non-linear facet of the Castlevania franchise. Due to that trait, Harmony of Dissonance is bound to enchant anyone with a love for meticulously exploring a large map and using their wits to figure out a world that is itself one massive puzzle. To anyone else, though, its abundant intricacy, its frequent backtracking, and the long distances it sometimes forces players to traverse may be a bit too much.

via Castlevania: Harmony Of Dissonance — Nintendobound