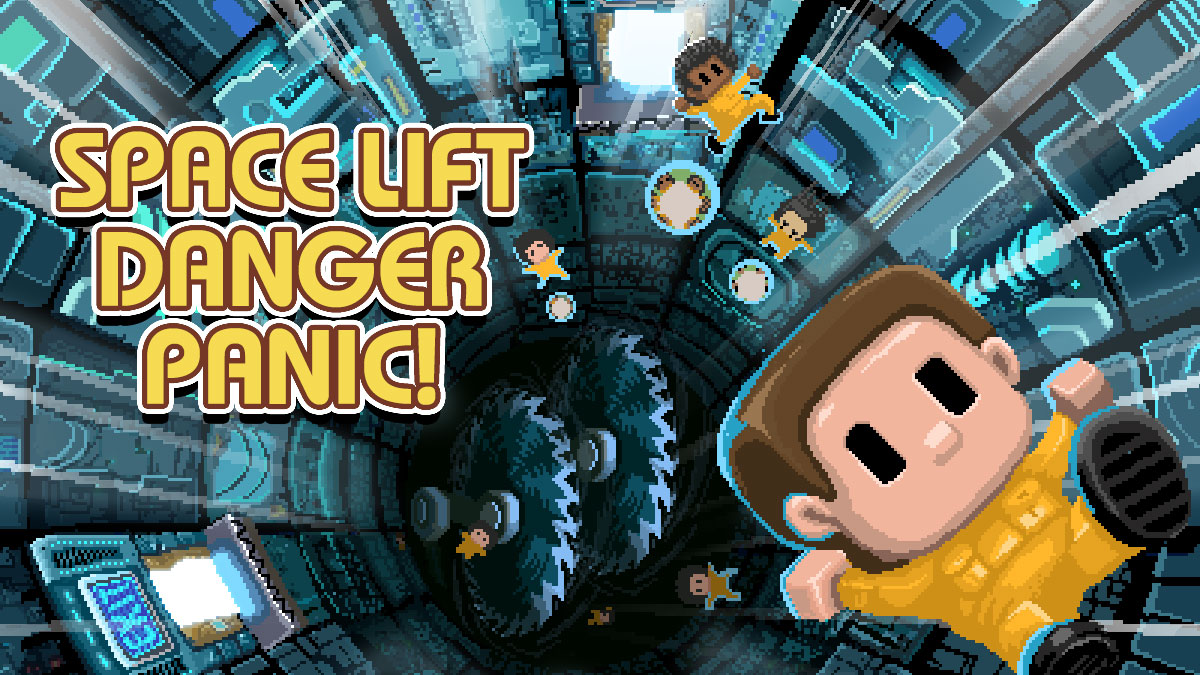 When first booting up Space Lift Danger Panic! (Yes, that’s one mouthful of a title) I was surprised to see that the game is restricted to being played as a handheld exclusive title, as it makes full use of the Nintendo Switch’s touch-screen. Although the concept is strong, it doesn’t hold up because of its lack of content and replayability.

Space Lift Danger Panic! is all about saving a group of space travelers named the Ceranthians. Your goal is to teleport these people away from a deadly spike lift that’s ready to kill anyone that falls into it.

To do so, all you have to do is touch the screen anywhere you want to open up a temporary portal that’ll pull in the travelers and take them to a safe place. Thanks to the Switch’s multi touch-screen capabilities, you can use all the fingers you want to create a seemingly infinite amount of portals.

To my surprise, there’s a story in the game (albeit a simple, lackluster one). The story itself isn’t all that interesting or in depth, but it’s none-the-less a nice addition for those that want a bit more context to what’s going on.

As for the modes, there’s three in total. Mission Mode, Gateway Mode and Survival.  Mission Mode is the “campaign” of the story, there are 40 brief levels in total, each with slightly increasing difficulty.

Then we have Gateway Mode, which has the player opening doors so that the passengers can escape through.

Finally, we have Survival, this mode can be unlocked early on by playing the story levels. It’s an endless version of Mission where there’s an infinite amount of passengers falling to their death.

Out of these three modes, I found Mission to be the most enjoyable of them all since they can be played in short bursts. Gateway is the least enjoyable of the three, as there’s not enough challenge in them compared to the other modes.

With that being said, there’s a big problem that all of these game modes have: they’re all incredibly simple and repetitive. None of the modes offer much content when it comes to replay value or variety in gameplay.

The game itself can become rather dull pretty quickly and can get repetitive after a few plays. I would’ve liked if there were achievements, obstacles, or something to keep the gameplay from feeling stiff very quickly.

I can’t express enough how much I dislike the visuals. There are four different visual styles; The “Hi-Res” graphics option is decent, while “Broken Console v.1.0” and “2.0”, as well as classic, are both visually unappealing and physically hurt my eyes.

The colours and texture patterns feel as if they are presented in such a way that it ended up bothering my eyes to the point where I had to take a break and change to a different style if I wanted to continue playing.

There isn’t anything outstanding with the music and although I never encountered with an irritating theme, but what I did hear, came across as being flat and uninspiring. It gets the job done when it comes to making a soundtrack for the game, but it’s average overall.

Space Lift Danger Panic! lacks content, variety and replayability, as well as an identity to make itself stand out. The concept of being able to only use touchscreen controls is interesting, but the execution is poor. It’s also a shame that even though there are three modes, none of them is appealing enough to keep me coming back for more.