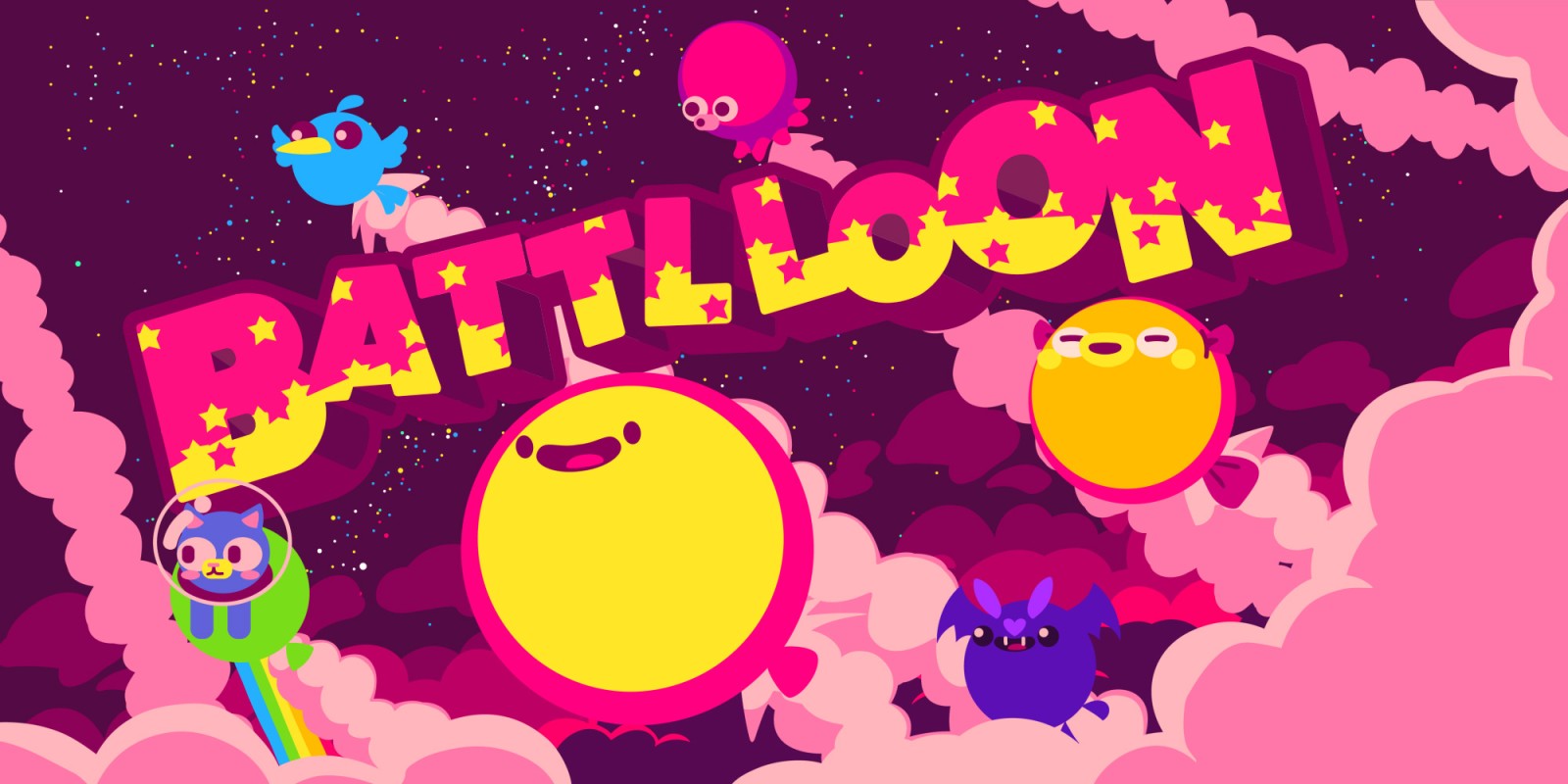 When it comes to party games, the Nintendo Switch excels at showing off some great titles you can have fun with friends and family. BATTLLOON is one of those games.

Developer noname studio has done a fantastic job in creating a game with solid gameplay, minimalistic controls and adorable visuals. The game has up to four players controlling balloon styled characters, and the goal is to ram each other into spikes and pop them. Last balloon standing wins.

To play, you use your analog stick to move the character in any direction. You press a button and the balloon starts inflating.

Once you’re ready, you let go of the button and get propelled by the wind blowing out of you. Use the force of the balloon’s propulsion to ram into another player and throw him into the spikes. That’s all you need to know to jump into the game.

The simple controls make it easy for anyone to join in on the fun. The game supports all available controllers, from sideways Joy-Con to the Pro Controller.

In terms of balloon characters, there are six different characters to choose from, with the first being Mr Balloon, whose great at boosting up near walls. Then there is Tako-San, an octopus that inflates with short bursts and goes faster with each inflation, who is followed by Puffer, a heavyweight pufferfish that is hard to launch off; Morphy, a bat that can’t stop once its propelled; Astro Cat, an adorable space cat that has a rainbow line follow him with every boost; and finally Birdie Jay, a very small bird that can evade any big attack coming it’s way.

Every character is unique and stands out from one another, whether it’s from its adorable design or its unique trait.

There’s various unique settings in which the players will battle it out. From under the sea, to the sky, to an abandoned frozen metropolis. Each setting has its unique obstacle to avoid. Getting hit from one of these will stun the player for a bit, leaving them exposed to attacks.

These obstacles range from a time ticking bomb that fills more than half of the stage to a meteor falling from the sky. Within a stage, you can find the deadly spikes, bouncers that launch players off and propellers. Planning out where you want to move and avoid attacks is key to winning.

If you’re playing with three or four players, once one player is defeated they turn into a ghost. This means that although they’ve lost, they’re still able to have their sweet revenge.

After every round, players are rewarded for how they did in the match. The top player gets to hold a shiny crown for the next round. Defeating the crowned player nets you more points at the end of the round.

BATTLLOON is multiplayer only, with no single player content. So if you’re looking to play alone, then this game is NOT for you. Speaking of content, the only mode available is the local player vs player mode. There’s no online, no unlockables, or any other mode for that matter.

This can become a problem in the long run. The game is best played with various other people. I played with my brother for around half an hour and had already seen it all within the first ten minutes. It’s somewhat disappointing to see that with how solid the core gameplay is, there’s not much else to see after the first few minutes.

Visually, the game has an adorable pixel art style. The visuals only use a handful of colours that make characters and obstacles stand out from the background. It’s simple and so gosh darn cute. The soundtrack is also good. Although none of the tracks struck me as being distinctly unique or memorable, they serve the purpose of making matches feel fast and intense. The lobby theme however, did get somewhat annoying after a while since it looped after a few seconds.

There’s no denying BATTLLOON is a lot of fun. It’s an adorable party game you can easily play with friends and family, thanks to its simplistic visuals and controls. The only downside is the lack of modes.

At the moment there’s no other mode to play aside from player vs player. thus making BATTLLOON a hard game to recommend outright, but at the low asking price of $6.99 USD, it is worth the asking price, but more content would have been preferred.