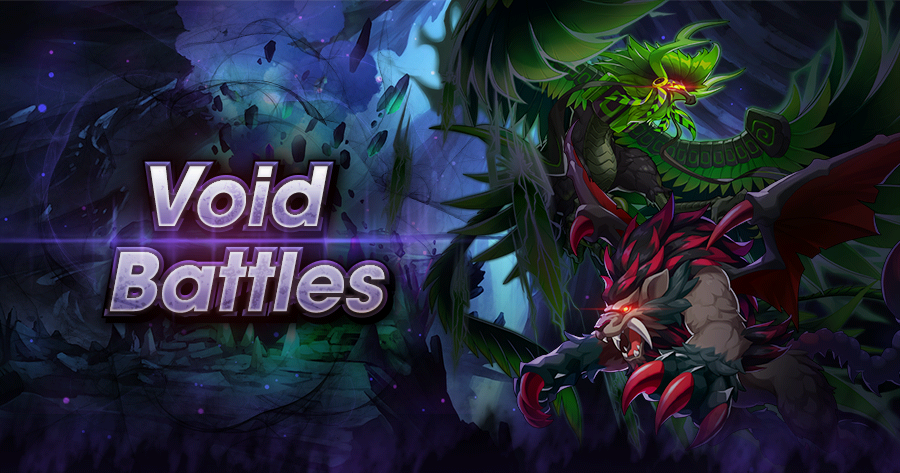 The new content for Dragalia Lost has finally arrived in the form of Void Battles! Void Battles are a new type of battle where you can face off against different bosses (depending on the day!) to earn materials to exchange for new Void themed weapons. If you missed our past post on Void Battles, you can catch all the important details below:

One day, a call for help from a neighboring city reached the Prince and his companions. Atrocious fiends were appearing, including monstrous dragons transformed by the effects of black mana, and they were wreaking all manner of havoc!

You’ll face powerful boss enemies in these event quests. If you defeat them, you can earn materials for crafting weapons or trading in for rewards.

You can challenge Void Battles anytime, regardless of the day of the week. However, the boss enemy that appears will differ based on the day.

You must clear Ch. 7/5-6 (Normal) of the main story to participate in Void Battles.

Upon defeating a Void, you can earn materials for crafting weapons or trading in for rewards.

Voids also have a small chance of dropping weapons.

You can trade the various materials you obtain by defeating Voids for rewards in the Treasure Trade. With the exception of certain rewards, the exchange limit for the Void Battles Treasure Trade will reset on the last day of every month at 10:00 PM PT.

You can craft weapons using the materials you obtain by defeating Voids. Some of the crafted weapons gain abilities when enhanced. Among these added abilities, some provide resistance against the Voids’ special abilities, and some of them boost damage against the dragons that appear in Advanced Dragon Trials.

We plan to add more types of weapons that can be crafted using materials obtained by defeating Voids in the future.