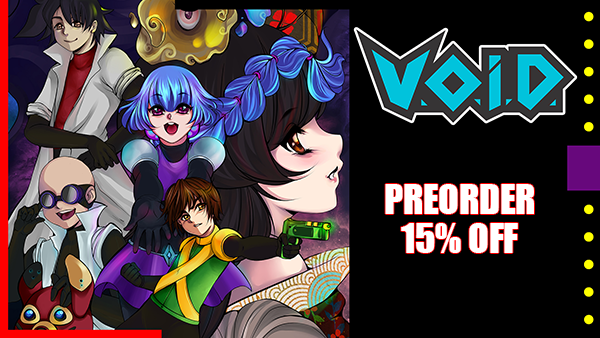 Indie Game Developer and Publisher JanduSoft have announced that their retro inspired platformer V.O.I.D is coming to the Nintendo Switch. The game will release on the Nintendo Switch eShop on February 28th. Starting today until release day, there is a special pre-order discount of 15% off.

Let’s get Retro with this offer!

Starting February 7th you can enter Nintendo eShop and preorder the most retro-platformer game, V.O.I.D.!

Preordering a digital game? Silly! As if it were going to run out of copies! What is going to run out is this awesome offer: preorder V.O.I.D. before  the release day (February 28th) and get it 15% OFF!

V.O.I.D. is an all-new side-scrolling action game for  PC/Switch made by NAPE GAMES and JanduSoft! Taking the best aspects of the 8- and 16-bit era classics, and transforming them with modern tech & fresh mechanics, into something new and exciting!

PLOIDS are the evolution of the human race by merging technology with its DNA. Our planet is invaded by a race from another galaxy, which destroys everything it touches to become thus with absolute power.

After some time, a group of Ploids decides to take action and return the peace. To achieve this, Alpha and Omega must travel through time to eras of ancient land, in order to obtain sacred stones that will give him the necessary power to defeat the invaders. Some of the ancient epochs are feudal Japan, the ice age, the medieval era or among others. What he does not know is that the invaders tried to get those holy stones before him! … In addition, time threatens to collapse, and only you can connect to the PLOIDS to save the Earth!

Once you select your character and due to its peculiar characteristics, the game will take a different style, or high speed platforms, or a shooter platforms.