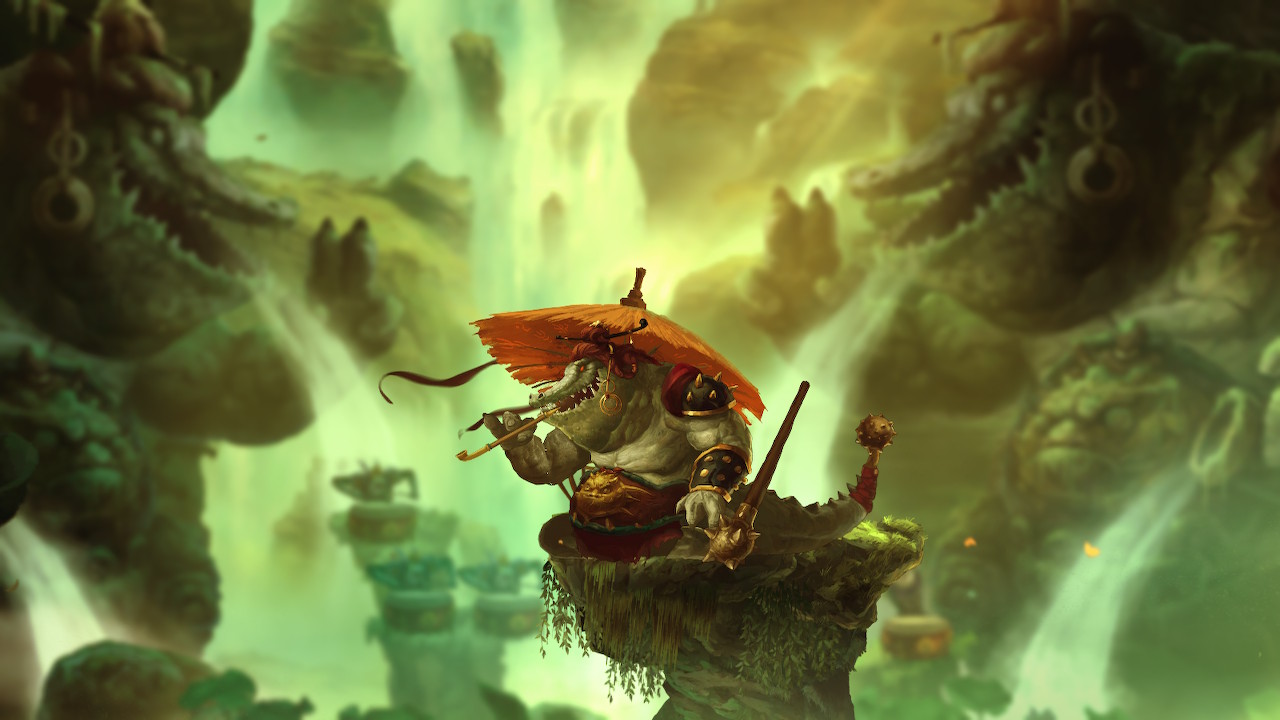 January 30, 2019 3:54 am Published by jonathanober Leave your thoughts

Magic Design Studios started promoting Unruly Heroes back in 2017. From early on the impressive visuals and animation, fluid platforming, and aerial combat intrigued me. The game felt like a next of kin ‘love child’ of a Ubisoft Rayman game, and rightfully so as there are team members working on Unruly Heroes that also worked on previous Rayman titles. The fluidity of character animations and precise platforming made Unruly Heroes a game to keep our eyes on for the Switch, as well as the other consoles that it would be releasing on.

Unruly Heroes is deeply inspired by the 16th century Chinese novel ‘Journey to the West’ and partners together Wukong, the Monkey King, Sanzang the Sleepy Monk, Kihong the Greedy Pig, Sandmonk the Sensitive Brute as they search for the scattered remnants of the Sacred Scroll.

The game is broken into several worlds which feature enemies and levels surrounding the main theme of that world, though there are gameplay elements that overlap from level to level and world to world.

Each level can take twenty minutes or more as you learn how to traverse by wall jumping, air dodging (one of my favorite moves) and engage in combat with armies of wolves, swarms of bats, and crocodiles that almost seemed plucked from the Donkey Kong Country series.

Unruly Heroes borrows a lot of the best of the aforementioned Rayman and Donkey Kong Country series both in style and gameplay. While the comparisons are fair and can be easily seen, the gameplay deviates from both of those games in the method of which you cycle through your teammates one by one.

Each member of your team comes with skills that will aid you in completing and navigating the various world and boss battles. While I found myself gravitating to using Wukong much of my time, I also enjoyed the other characters and their unique approach to each level and would often challenge myself to limit switching to another character in hopes to perfect my level run-throughs.

As you enter each level, most of which you either drop down from above, or enter from the left, which help accentuate the comparison to Donkey Kong Country games you begin your journey to the end or to the mini or larger boss challenges by wall-jumping and climbing your way from platform to platform.

The variety in level designs quickly add traps and enemy rush areas at you. There’s even mine cart type levels and floating log flumes that you must traverse and stay with which ‘check off’ the standard platform genre levels.

In Unruly Heroes, you have your standard jump, roll and movement controls. Along with those standards you have light and heavy attacks as well as a dodge button, which you will use a lot. Unruly Heroes really feels like one of the best 2D side-scrolling martial art style games that I have played in a long time.

Combat is fast and fluid and swinging at enemies with Wukong’s staff or Kihong’s staff blade help you reach enemies just out of your normal punch range. Some of the characters also have a spinning attack which widens your reach and helps to include enemies around you into the battle.

As you defeat enemies with each character their individual special meter fills up allowing you to perform a devastating combo. These are powerful as well as visually stunning animations that I often would save for certain boss encounters or when I was overwhelmed by the onslaught of bad guys that the game throws at you.

Wukong unleashes a devastating amount of hits during his special move, whereas, Sanzang grows in size and deals out a large amount of punch attacks for a short time. Filling each characters special mete evenly can be the difference maker in boss battles, which is a simple way the game nudges you to mixing up your combat and not relying too heavily on one character.

One gameplay concept you need to wrap your head around is how important it is to switch between characters and perfect your air or ground dodging. I found myself often mistaking the one button for the other as I would hope to be able to scroll left and right through the characters except for the fact that the game locks the character swap as the left shoulder and the dodge as the right shoulder. Perhaps this could change in an update but for now, it’s a bit of a confusing button setup.

If you die in battle or while traversing the level, your character’s soul shows up in a bubble which you need to get back to and ‘pop’ to add them back into your roster. In some ways it’s silent take on Baby Mario in the Yoshi’s Island games…and boy was I glad that Wukong and Kihong didn’t cry or squeal when they died and were kept in the bubble.

Along the way, whether it be solo or in local co-op, players will encounter a diverse lineup of enemies to battle within a colourful fantasy world. There are wolves, toads, bats, crocodiles and more. Some enemies have spears that they throw at you which again requires well-timed dodge maneuvers.

Foes with shields sometimes require more creative methods of taking them down either by throwing them at another enemy, or better yet, throwing them into spikes or spinning blades. When entering a room I often would try and be as quick and creative in how I dispensed of the bad guys.

Boss battles are a bit more complicated in Unruly Heroes and contain some of the most colorful and well designed and animated battles that I have played in a 2D platformer. As I said earlier the homage to Donkey Kong Country games and Rayman series is evident throughout Unruly Heroes and their boss designs are no different.

Most fights consist of the standard do this three times, then shift to another attack phase, and then another. The main downside to boss battles is that sometimes you may have to fight them a few times before understanding the pattern and knowing the best time to dodge and attack. I also found that switching between characters who have better jumping abilities vs. the more floaty jump to be helpful, at least in some of the earlier boss fights.

Unruly Heroes does support local co-op gameplay. This game play mode is similar to how co-op Mario works but with the precision platforming and not as forgiving enemies, co-op is better spent with friends that know what they are doing. This isn’t your average pick up and play luck based game; Unruly Heroes requires real skill and patience to get through. I often found myself ahead of the group I was playing with and sometimes that made for some odd camera positioning and missed jumps.

The co-op mode is a case of “You’re only as strong as your weakest link” playing out in real-time. That’s not to say I didn’t have fun when playing together with friends, but I found that navigating with four people is a bit more difficult than maybe just one other friend.

Within Unruly Heroes’ levels, you have various collectibles. Those consist of coins, which are often dropped by enemies, a hidden scroll which showcases some of the games artwork, and then a medal which indicates how well you did across (time for completion and deaths).

The coins you earn in each level go towards your overall coin count which allows you to unlock four character skins for each of the heroes. Achieving gold rank in all of the levels, especially the self-contained boss fights is truly an ‘unruly’ task and not for the faint of heart.

Unruly Heroes has a decent enough soundtrack that has tunes that fit into the mythos of the Monkey King and the search for the Sacred Scrolls. There are subtle use of Chinese wind and string instruments as well as drums and cymbals throughout the levels background tracks. The music fits really well, and although there isn’t a tune that sticks in my head over and over like some of the very best of the Zelda series, the music is decent and not off-putting.

One pain point in the game, is the voice acting. To me, some of the characters just seem over the top and out of place and overacting. This isn’t too common of an occurrence, but there’s just a few lines of dialogue throughout that made me chuckle at how they were delivered.

One favorite of mine though was the Crocodile Boss which looks and sounds like the meaner, smoker-cough-induced brother of King K Rool. The gravelly grating voice was fitting of a bayou croc and fit the character design well.

Unruly Heroes can be at times, a very punishing difficult game. The jumps and mid-air rolls you need to perform, much like you find in the Donkey Kong Country series, require timing and finesse. These types of games are usually not my favorite and usually frustrate the heck out of me.

Because many of the boss battles have little to no health regeneration available, I found myself playing some bosses over and over again until I understood their pattern. To me, the game has a bit of that being hard just to be a pain in the butt kind of game and covering up the lack of game length with screens of death and reloading areas.

If you like your platforming games with some grit and toughness and precision, then Unruly Heroes is sure to whet the appetite. 2D Platformers seem to come in spades in the eShop but there is this bar of difficulty and grade A indie devs that have brought a lot of newness and fresh ideas to the genre.

Unruly Heroes sets out to be ambitious in design, which it succeeds. In gameplay, with the four character mechanic, which it does very well at and with its tenacity for precise platforming which it excels in. If there is one thing that goes against Unruly Heroes is it’s difficult boss battles which can feel daunting if you’re forced to repeat them over and over again. If you that last bit makes you hungry for more than Unruly Heroes is right for you.