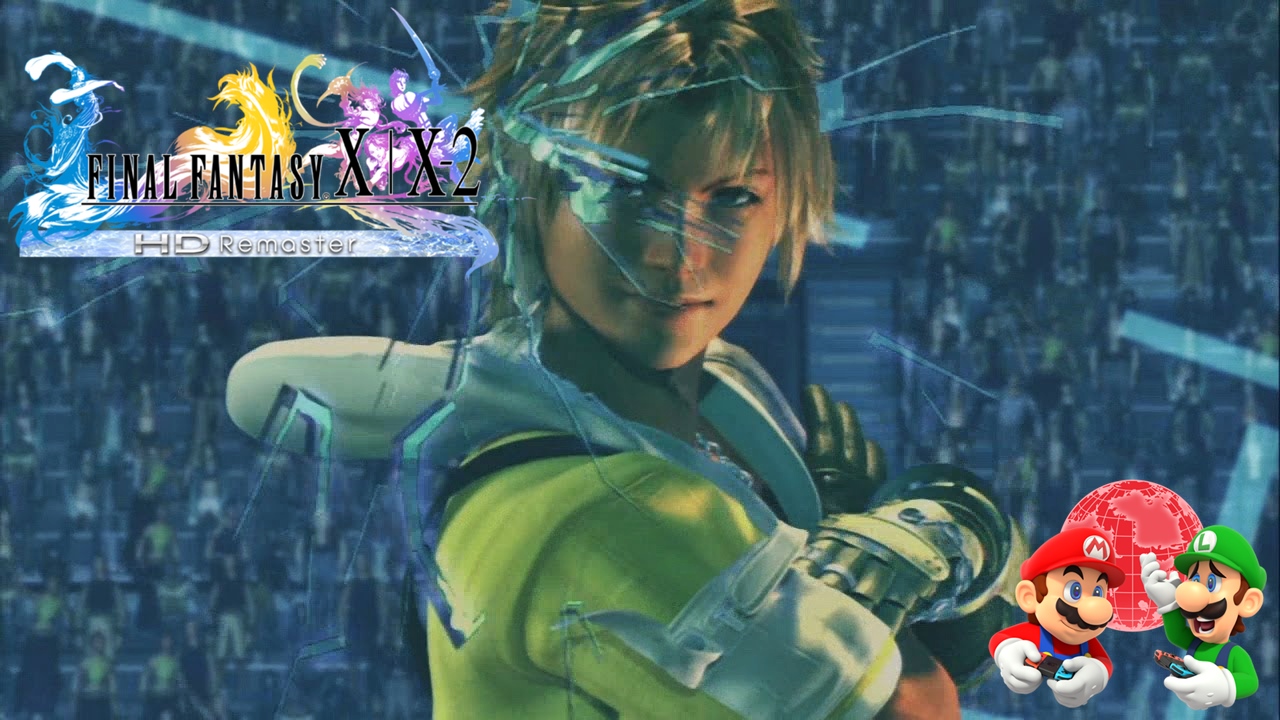 If you build it, they will come!

How’s it going, everyone? This is Jack Longman of Miketendo64 and it is time for another video game write-up for a feature series that we like to call Switch & Tell. Coming under fire in this particular instalment, I will, in fact, be talking about Blitzball and I suppose a few paragraphs on Final Fantasy X and Final Fantasy X-2 wouldn’t go amiss!

Naturally, I jest but in all seriousness, the remaster of Final Fantasy X and X-2 for Switch was something I had wanted for a long time. So long in fact that the first time I started tweeting about my wants and needs for it, dates as far back as October 15, 2017. Don’t believe me, here’s the tweet in question and a few others I have made since:

I know it would be cool if #NintendoSwitch did get #FinalFantasyXV sometime down the line, but honestly, I'd rather have the remasterd #FinalFantasyX and X2 ported to Switch. #Blitzball is life! https://t.co/E3cGK9ejog

See for me FFXV, I could take or leave it as I really didn't enjoy it at the various game expos I played it at, but FFXIII would be right up my alley. Or a port of the remastered FFX & FFX-2. Blitzball on Switch. Just imagine it!

Best Sports Game ever! Blitzball is awesome and a #FinalFantasyX port for Switch needs to happen! @SquareEnixUSA pic.twitter.com/CVVrVR17il

I'm doing this, just because I want the Final Fantasy X & X-2 Remaster on Switch. This guy has a Blitzball fix to take care of.

#FinalFantasyX is among the many Final Fantasy games confirmed for Switch and @Jacktendo92 has just lost it. It's the one Final Fantasy game he wanted. Blitzball is coming to Switch! pic.twitter.com/sRogyoSRyC

Oh yeah, I am that obsessed about FFX on Switch and clearly, my obsession has paid off, but now that mere months are all that stands between Switch owners and the eventual release, it is time to see if I can convince you to love the games as much as I do. So, to kick things off, here’s a little video to set the scene:

Although the video above is the opening cinematic for the HD release of Final Fantasy X and X-2, when I first saw that scene in the original release that is pretty much how I picture it, every time I remembered it. Should you wish to see how the HD version compares to the original though, that’s what this video is for:

Back to the opening cinematic though. This was the scene that made the younger me stare transfixed at a screen and become instantly smitten with what I just saw.  Tidus looked cool, the former Warrior Monk Auron was mysterious and the sport Tidus was playing, was certainly something I hoped to see more of in the game and I wasn’t disappointed. It was also in this scene where players get to have their first experience with Sin, a gargantuan beast that looks like the kind of whale you would encounter in a nightmare.

I had previously played other Final Fantasy games but much like with Xenoblade Chronicles 2, the first two hours were more than enough to sink its hooks into me and even to this day, more than 15 years later since I first played it, it has never let me go.

There are of course many reasons for this and one of the first is the characters and the story that drove the events of FFX. Tidus may have found himself arriving in Spira, but thanks to the friendship of Wakka, Yuna’s kindness and Auron’s guidance, he is able to become a well-grounded person who will do anything to protect those his loves, and be willing to pay the ultimate sacrifice.

Sure, he’s only hanging around Yuna and the gang in the beginning because he wants to try and find a way home, but that attitude only lasts for so long. Another reason why the game is so good, is the fact that the world and town maps have been better implemented and rendered to scale, it was also the game that showed the old Active Time Battle system the door and introduced the Conditional Turn-Based system instead.

In other words, players were no longer pressured to make their moves as quickly as possible since there were now afforded the chance to think about what they wanted to do and then implement it. It was also the game that made changes to how Aeons were used in battle as well, due to the fact that Aeons could now be summoned and replace the entire team for either the rest of the battle or the Aeon died. (In previous games, you could summon the Aeon and have it attack before it would then depart.)

Then of course, there was the Sphere Grid. With it, pre-determined stat bonuses were sent packing and characters would be able to gain Sphere Levels instead upon collecting enough Ability Points. In additional to being able to empower a character’s stats, the Sphere Grid could also be used to have them learn new skills to make them much better fighters. (Anyone could be a healer and any healer could be a warrior!)

Quite simply, Final Fantasy X included and helped a lot of new features that have helped to change the RPG genre for the better and I’m being totally biased but for the game was near flawless.

Some of the twists I should have seen coming, but they shocked me all the same because I was just too engrossed. For me, Spira was a world of wonders and beauty and I really enjoyed playing as Tidus, embarking on a journey with Yuna and acting as a guardian on her pilgrimage to acquire the aid of powerful Aeons, perform ceremonies to help unrest reach the Farplane and fight some magnificent monsters! Most importantly though, it gave us Blitzball.

Although defined as a mini-game and an optional one at that, Blitzball is an underwater sport that is played in a huge sphere of water that hovers in the centre of a stadium. While it does feature in the game’s story and a couple of matches are mandatory, for the rest of the game, Blitzball is something you only have to do if you want to play it.

If you don’t feel compelled to put together a team, train players and have them learn new moves and play tournaments, then you didn’t have to. If you did want to do that, then there was no limit to how far you could go with it. In fact, by playing a lot, Tidus can learn a second special move named after his dad and do some real damage with it. Although, by playing Blitzball, players can acquire Overdrives for Wakka and his Celestial Weapon.

Essentially, Blitzball is a combination of football and American football played underwater and I found it to be so addictive that I spent more time playing Blitzball than I did the actual game. For me, it was my Fortnite. It was my Rocket League and I did play it to death. First I played it to the point my PlayStation 2 died and then I when I brought another one, I played it until the disc died and I had a hard time finding another disc since at the time, I was living in Spain and I wanted an English copy.

Because I couldn’t play the game though, during the summer, a few friends, my siblings and I saw fit to go to the beach and play our own modified version of Blitzball in the water. It wasn’t as fun, but it gave us something to do and when the summer was over, I brought Final Fantasy X-2.

The only real issue with it was the fact it was in Spanish, meaning, although I attended a Spanish school, had Spanish friends and new enough to be able to play a game, there were plenty of things I did miss out on. Things like key story details, character comments and jokes that didn’t translate properly.

It is because of this, I am excited about the FFX-2 HD remaster since it does afford me the chance to put right a past wrong. (Yes, I could have just brought a PS4 and brought it sooner, but since I parted ways with the PS2, I’ve never owned a Sony console since and am in no rush to do so again.)

Who knows, often referred to as being Final Fantasy’s answer to The Legend of Zelda: Majora’s Mask, there is a chance I could actually like FFX-2 more than I adore FFX (highly doubt it,) but to know for certain, I will have to play it and this April is as good a time as any. Only, if you do find yourself loving Blitzball in FFX, it does suck in the second game.

The reason for this is because in the first game players are able to control a team and actually play the sport, whereas in the second game you have more of a managerial role. You can play formations, give orders on how you want your team to play and Yuna can actually play in the remaster, but it’s just not the same. Players must be levelled off the field, compared to on it and it’s certainly a lesser experience that felt like it was made overly complicated.

Make no mistake, Final Fantasy X is one of the finest Final Fantasy games ever made, it’s a stellar RPG and the fact it does come bundled with its sequel, means it is an absolute must buy. It is a legendary title and thanks to the portability of the Nintendo Switch, anywhere and everywhere, is the perfect place to do some more blitzing!