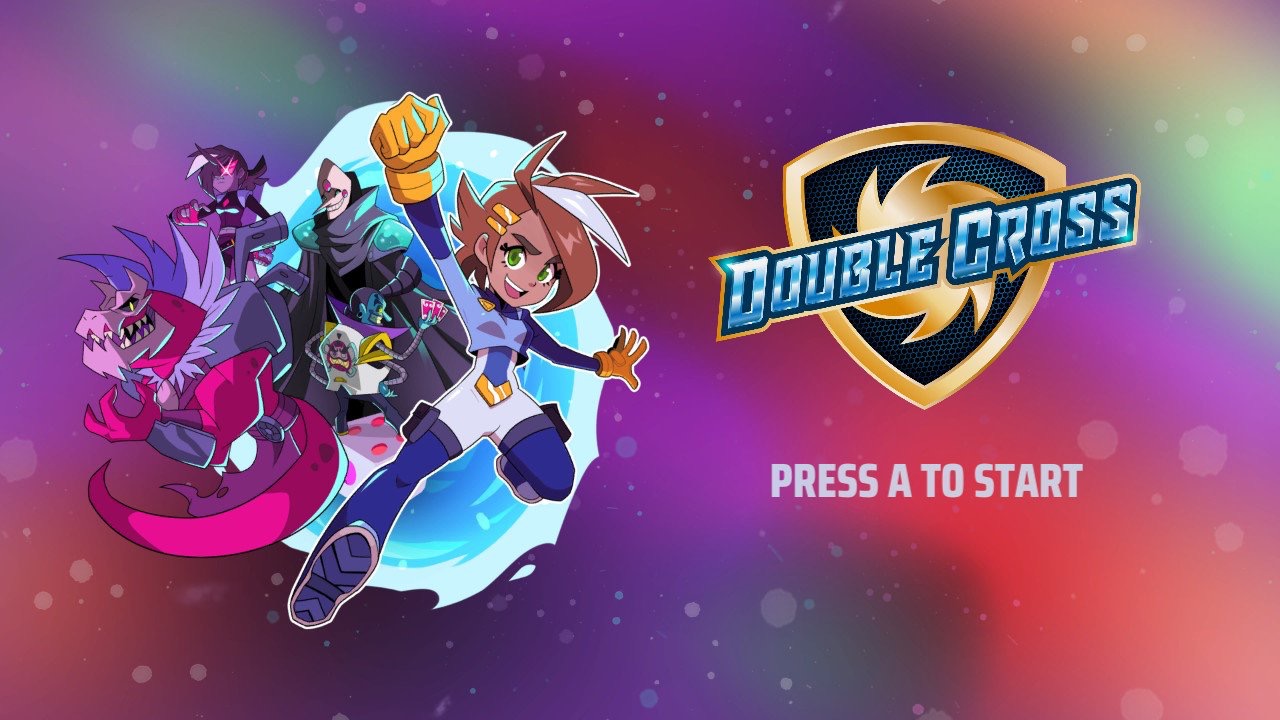 What happens when someone infiltrates the RIFT headquarters and steals something important? Well, playing as Agent Zahra. you must act the role of a detective and find out who the mysterious Suspect X is? Are they a fellow agent of R.I.F.T? It’s up to you to find out.

The game kicks off with an introduction to the society and organization known as “R.I.F.T” (Regulators of Interdimensional Frontiers and Technology) and you are soon introduced to the main agent Zahra Sinclair. You can then freely explore the headquarters and begin to find out the mission at hand from the director. But wait! You can’t be an agent of RIFT without the proper training.

Well, what exactly does “Training” mean? You make your way towards the gym, and you are tasked to make your way through an obstacle course of sorts. Here, you learn the basic controls such as jumps, wall jumps, and the Sling which is the main tool the gameplay of Double Cross revolves around.

Just simply push the ZR button when an obstacle is located, use your control stick to aim, and then let go to sling yourself across gaps. After training, is when the real fun begins. You head to meet with Vallery Wiseheart when a sudden lock-down of RIFT headquarters occurs. Who is Suspect X?

The story and gameplay of Double Cross revolves around three main “Hub” locations including the R.I.F.T HQ. Reptaria, the home of the reptile like enemies, Gootopia, the home of the mysterious goo, and The Funderdome, home of Hancho who has been found bribing fellow RIFT agents. The game is broken up into these three main locals and you are freely able to explore/solve their case files in any order you see fit. Do you have the wits of a detective to solve the problems at hand?

The game features an in-depth upgrade system for Zahra and her abilities. Scattered throughout the worlds are “Upgradium” that’ll help level you up and which case then unlocks new abilities for you to access. If you are on a mission, just pause the game and the total amount of Upgradium can be viewed for your location. Unlock something new? Access terminals to be able to change your abilities on the fly!

Double Cross had me intrigued from the very start! The story is deep, and I felt like I was on my own detective case the entire time alongside agent Zahra Sinclair. The gameplay at hand puts a twist on fast-paced platforming action and was rather enjoyable in the end, expect FOR when I found myself miscalculating the direction of the sling.

During my experience with Double Cross, I only had two minor technicalities, the one mentioned above, and the loading times were often a little long (might of just been in handheld). When using the “Sling” once attached to an object I would often miscalculate the direction needed either sending me into a pit to my death, or missing the next object. This did overall lessen the experience when you would often need to perform this multiple times in a row over a given obstacle.

Now onto the music and graphics. Double Cross has a rich futuristic vibe when it comes to the games soundtrack and visuals. I often felt engulfed in a space like setting and it would feel like I was right there on my own mission for RIFT! The visuals and graphics where vibrant and bright and never got dull or boring.

Double Cross is a welcomed addition to both 13AM Games library of offerings, and a welcomed addition to the platforming genre on Nintendo Switch overall. With a rich cast of characters, & a deep story, I felt like an agent of R.I.F.T at heart. Now back to the question at hand, who exactly was Suspect X? Well you’ll just have to act the role of a R.I.F.T agent and play the game to find out!