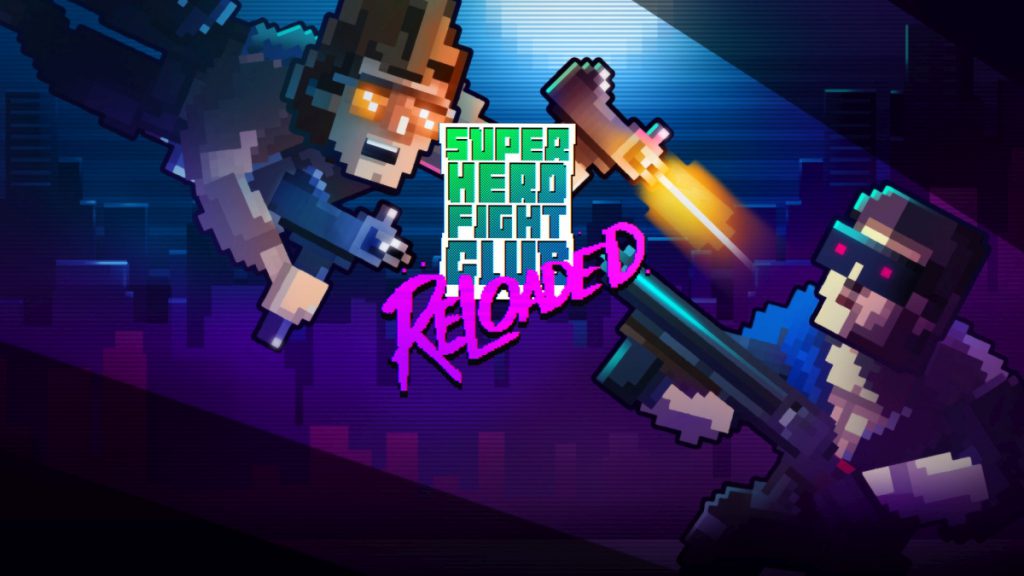 Get ready to take the most slapstick group of super hero wannabes in a game of deadly tag with Super Hero Fight Club: Reloaded on Nintendo Switch. Developer Incuvo has crafted a fun couch multiplayer experience that, while light on the content and not the most original, adequately serves the purpose of making you feel a sense of triumph for defeating your opponents.

Super Hero Fight Club is very similar to another competitive multiplayer title Starwhal and is a dual-stick version of Joust. There is a quirky cast of characters to choose from, including one character making fun of ‘Batman’ called ‘Ratman’ and a character named ‘Stephen’ who is a parody of the popular Minecraft character ‘Steve’. It features an interesting retro art style and many nice satirical elements with quick pick-up-and-play controller arrangements easy enough for any player to figure out.

The presentation is very reminiscent of the ’80s with a synth-laden musical score and pixel-based graphics that fit the aesthetic. When first starting out there are two modes to choose from: Arcade and Multiplayer modes, with Arcade featuring the standard Ladder matches, Missions, and Survival. You have a choice from seventeen different fighters, each with their own unique attack patterns. Your goal is to defeat the opposing fighters in by any means necessary by poking, shooting, whipping, or slashing them. Each character features a different attack skill and these can be broken down into strictly melee, long range melee and ranged.

Some characters shoot missiles or bullets, while others may fight with a lightsaber or steel ball. The sword-like weapons are mainly good for darting about and jousting with others, or some have ball-and-chain mechanics where you can swoop around and the ball will follow your inertia trying to swing around and hit an opponent. Each character’s mechanics feel unique and fun to play around with and experimenting with each fighting style can be fun. Some characters seem too similar and could be identified as a re-skin, but they all have different attack tendencies and personalities.

At first, I had no idea how to successfully play as the movement feels weird and somewhat inverted somehow. There are obstacles in some of the environments that can kill you, including fire spouts, chainsaws, and subway cars, and I oftentimes would inadvertently kill myself in the process. It takes some getting used to, but once the controls start to sink in it is fun to fly around the stages creating chaos for your opponents. Dodging and weaving inside the deadly levels can be quite adrenaline-inducing to say the least.

Power-ups can be found around the randomly generated levels that can be used to shield you or increase your speed, and even some that can cause your opponents to lose control. The ‘lose control’ powers was especially annoying as it hits an opponent at random and if you are affected it’s a quick way to die if playing against someone who knows what they are doing. You can modify your matches for 1v1 or up to four players can battle it out and this is where Super Her Fight Club truly shines.

This is a title meant to be played in multiplayer and the AI is not up to the task most of the time in single-player. They can act in dumb ways and are easy to play around with, though that’s not to say Super Hero Fight Club isn’t challenging, but once you get the hang of the controls it becomes somewhat of a joke. It’s definitely a game you can play once in a while with your friends for some great multiplayer action, in a similar vein to Nidhogg with a fast-paced gameplay loop.

While the single-player content might be lacking, there’s still plenty of ways to play. Every level has different hazards to overcome and for as simple as the controls are, the different attack mechanics take some time become proficient with using. There is no fire button for projectile weapons as they fire automatically, so you don’t even have to worry about that control aspect. Survival mode is a great mode to play single-player, as you just see fighting waves of enemies unto you die for a high score.

Overall, Super Hero Fight Club: Reloaded is a fun multiplayer fighting title that packs a good amount of retro charm in its proceedings. Matches are quick and serve the purpose of providing a simple, yet enjoyable time with friends. The lack of more in-depth content does hurt the replay value and this is the type of game that is not meant to be played in single-player for very long. However, there is a thrill with trying to be tactical, while also trying to outlive your opponent simply by playing a game of cat-and-mouse.