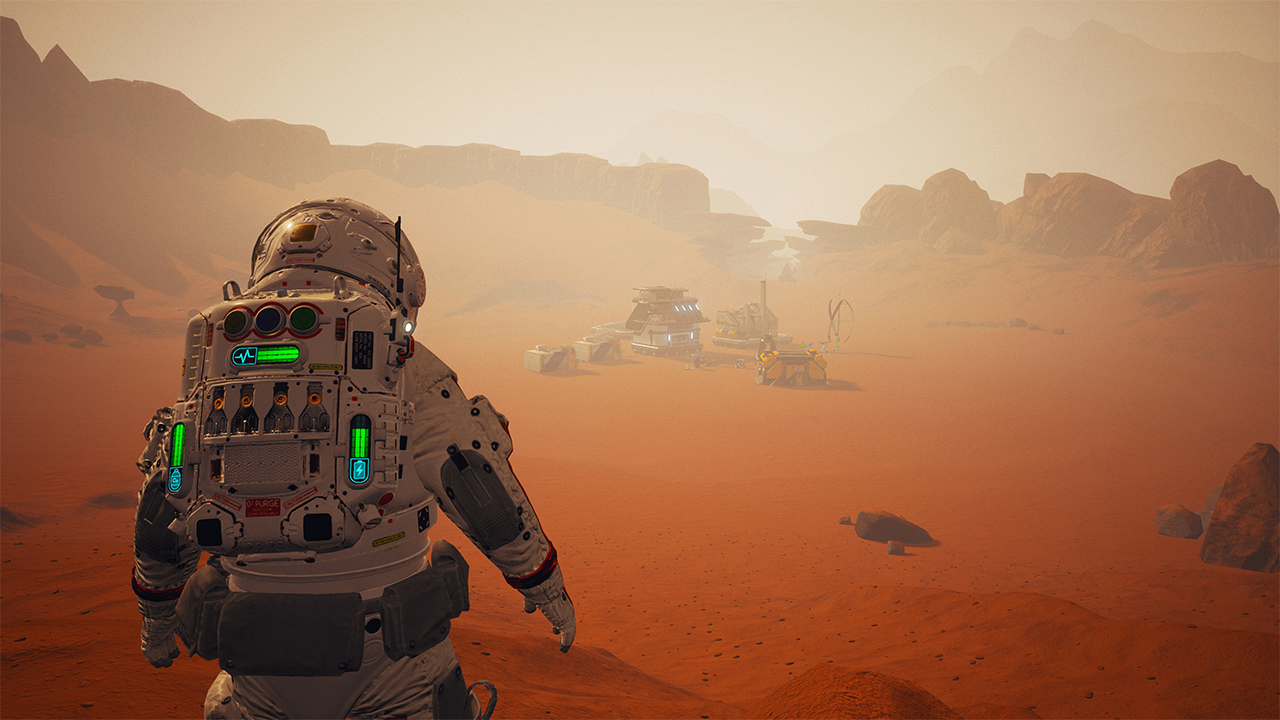 There’s no life on Mars.

You’re humanity’s only hope. The survival of all humankind rests on your shoulders as you are thrust into the Martian landscape in order to rebuild a habitable colony on Mars. This seems like a decent premise for a game which puts you through trial after trial while you search the land for resources and begin the creation of this new colony.

The story itself is told through various audio instructions and mission tasks that outline your standard fetch quests to rebuild your habitat and construct items for survival using the 3D printer by finding resources throughout the planet. You have a gun, of sorts, that allows you to repair items ruined due to the crash, as well as, parts of your habitat ruined during meteor storms and other environmental issues you will face.

You start off crash landing on the planet and having to walk to your first mission directive which is to find the JCB vehicle. This should be an easy, early game task, except for the fact that the game’s visuals are a muddy mess.

It’s hard at times to know if you are on the right path because environmental differences between what I can walk on and what will hinder my path aren’t as obvious and maybe that is by design by the developers, the Martian landscape is an unmapped and uncertain, but as a gameplay mechanic that inability to easily discern things, especially early on in the game was more frustrating than anything.

In the game, you have a few primary ways of getting around the planet’s surface. You can walk around, which is a bit slow, but due to the gravity level on Mars, you can also jump with a bit of a floatiness which adds to the feeling that you are an astronaut on the barren planet. One of the first things you will find is your JCB vehicles which will allow you to drive around quicker, though it is not without its difficulty.

When you drive, you will quickly notice a sliding lack of control with navigating. This may be by design, but to me, it’s just a poor game mechanic that is all too often infuriating and led to some misguided crashes.

JCB Pioneer: Mars is mission objective based, and most of the time the missions are fetch quests or build this-place this item here colony building type quests. The variety, or lack of variety, as well as instruction in how to proceed was often a loss for me. I found that I would have to scour the planet, check the in-game map, which is a mess to try and understand various iconography and actually figure out where you need to go.

Throughout the missions of the game, you will be tasked with finding resources throughout the planet and dig for them. After that you bring back the resources you have mined and convert the items to something usable, sometimes using your 3D printer within your Hab and then placing them around your base of operations. There is also a lot of inventory management as you will find boxes strewn throughout the planet that have items you will need.

Because of the lack of inventory spaces on your astronaut will need to manage what you carry and take with you, especially as you progress further and further away from your main base. I found the inventory management to be overly complicated, mostly because the game doesn’t really teach you what you need and when and how much of something you should keep.

The game doesn’t really have music, though it is accompanied by some very well done environmental sounds. From the crashing meteors to the incoming sandstorms, you will feel like you are alone on the planet vying for survival. The emptiness also has an allure or feeling of calmness especially leading up to a massive storm.

There isn’t much I liked about JCB Pioneer: Mars as I played through it on the Switch. Within my first hour of game play time, I had experienced a game breaking bug when I got my main vehicle stuck. This was just one of the many bugs I encountered though, while playing the game. I had at times been locked in and stuck in the item management screen where items and UI elements would pop up over top of my walking to my base or to the garage to manage my vehicles.

JCB Pioneer: Mars game also lacks an informative tutorial and many of the interface elements are not clear on what they do or how you are supposed to interact with them. I found it almost impossible to know what items I needed to use on certain missions and how to utilize items to do simple tasks.

I think a few of these things can be fixed by better tutorials, teaching you about item management, what icons do what, as well as simple map/UI changes that inform the gamer. But for now those are huge glaring issues JCB Pioneer: Mars has that makes it very difficult to recommend to anyone.

JCB Pioneers: Mars, is a very ambitious game in premise and idea, but falls short on its lack of instruction, interface text and icons and lack of polish that could make this game fun to play. There are very few things I liked about the game during my time with it, but overall. I can’t recommend it to anyone in its current form or at its current price point.