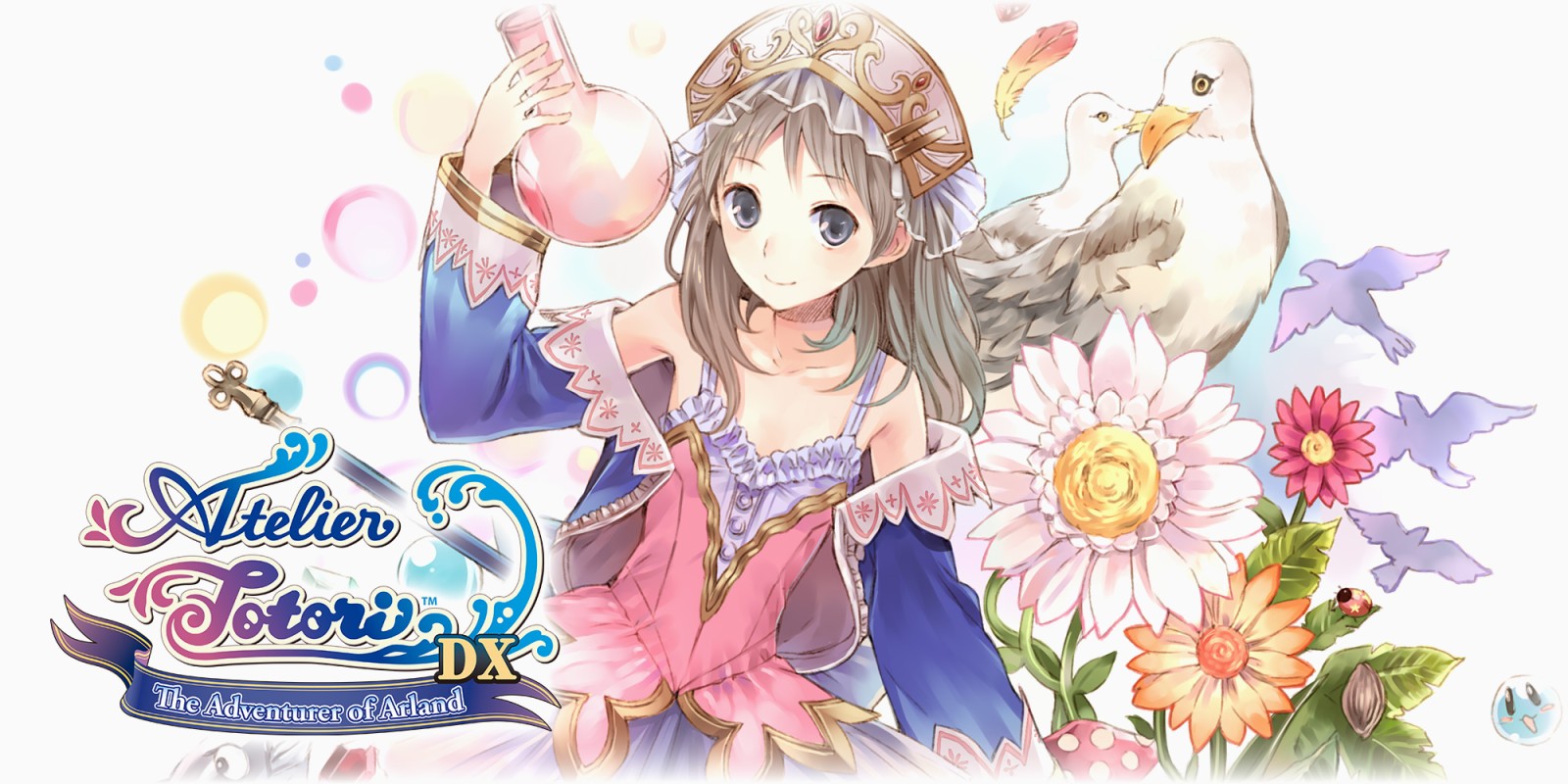 The story continues with Totori.

Atelier Totori is the second title in the Arland Trilogy of Atelier games. You can check out my review of the first game, Atelier Rorona, by following this link. There is a lot of crossover between games in terms of the mechanics of the gameplay, so there may be some retreading of concepts with these reviews. That said, let’s jump in and see what I thought of this game shall we?

The second instalment of the Arland Trilogy centres around Totori, an alchemist-in-training who dreams of becoming an adventurer. Her teacher in the ways of alchemy is none other than Rorona, the protagonist of the previous game in the series. It is hard to imagine Rorona as a teacher and, well, it turns out she is not a very good one at all. This consistent with her character and all other characters you meet who appeared in Atelier Rorona are very faithful to how they would act, which is a great callback.

There are two main objectives with this game. The first is to prove that Totori is a legitimate adventurer, finishing tasks to level up your adventurers licence in the hope that in three years time you have done enough to have it renewed. Fail at that and your licence is revoked, and it is game over for you. The second part is trying to find Totori’s mother.

Just like the previous game, Atelier Totori is a personal story that is more of a slice of life game, rather than your typical ‘save the world’ narrative. Unlike Atelier Rorona though, this game revolves around travelling, so you don’t really settle roots in any particular town or area. I found this added a level of detachment from the towns, as I never spent enough time in any single one to get attached to the people and places the towns contained.

Because of the personal narrative, the strength of the game truly revolves around its characters. Atelier Rorona was a great game because of how well written and likeable each character was. Unfortunately, Atelier Totori doesn’t have the same level of charming people to get to know. The old characters appear from time to time, and they are as great as ever. Totori’s sister, Ceci, is great, along with her father who is jokingly a background ornament nobody realises is there until he speaks.

There are some other characters that are fun that you run into later, but overall, as you are travelling most of the time, you only really get to know the characters you bring with you in your party on a personal level. Also, Totori is unfortunately rather bland and, at least for me, I found her rather annoying and childish. Totori being a weak character does bring the whole story down unfortunately, as it is harder to get excited about a narrative that revolves around a character you wish you could bench for a more interesting one.

Thankfully, Atelier Totori still has that solid gameplay that was present in the previous title. The game is essentially a JRPG, with turn-based battles and fetch quests, but the fetch quests have an added layer that makes them more exciting.

Because Totori is an alchemist, she can take jobs that requires her to make items using alchemy. Alchemy is the art of turning a bunch of items into something else using synthesis. This means that you will be going out in the field to try and gather materials to use in your alchemy. Each item has a level of quality as well. The better items you use to synthesise an item with, the better quality the end product will be. It is a simple system that is surprisingly fun to engage with.

Battles are very basic and bare bones. When you engage in battle, you have a few basic decisions to make. You can attack, which hits the enemy with your equipped weapon. Totori can use an item, such as bombs, cannons, healing potions etc. Other characters in the party can’t use items, instead having a special attack that consumes what is essentially a mana bar. You can defend, which means you take less damage from the next attack. And finally, you can also flee.

While Atelier Rorona also had a very basic battle system, that game didn’t centre around exploration, meaning that you barely had to engage in combat if you so chose. Atelier Totori however, seems to incentivise it, helping you to level up your adventurers licence quickly the more enemies you defeat and the more you level up. As such, it felt like this game focused more on this weaker element of the game, relegating alchemy to an afterthought system, despite alchemy being the aspect I found to be the most fun and engaging.

Because of the game’s focus on being an adventurer, there is a lot more areas you can explore. Traveling and exploring new areas is the driving force behind the game, but it also feels a little clunky to do. You choose what area you want to go to in a mini-map, though the map is somewhat clumsy to navigate. Each area is just a single screen too, usually consisting of a tiny area with a handful of enemies and resources to gather. There just isn’t any excitement or wonder about what you may find as you explore different areas, which just served to make the exploration rather dull and lifeless.

As you have a time limit of three years to upgrade your adventurers licence, each action you take consumes a certain about of days. Traveling from area to area will take a few days for instance, as well as synthesising alchemic creations. Even gathering materials will consume a time bar, eventually pushing the in-game date forward a day. This adds a little bit of time management to the experience, though it was done in a way that enhanced the experience, rather than detracted from it. It makes you prioritise jobs you need to get done, and helps you manage what you need to do and when.

The art style is more or less the same as Atelier Rorona, though the colours do seem more washed out than the previous title. Character and town designs are stellar, and the visual novel style anime portraits of the conversation sections are just plain beautiful. It injects a lot of charm into this game, which is refreshing to see, rather than most games that prioritise rather bland and bleak colour palettes.

Atelier Totori may not have the same level of charm as its predecessor, Atelier Rorona, but there certainly is enough here to satisfy fans of the series, and JRPGs in general. The game does focus on some of the weaker aspects of the gameplay, such as combat and exploration, but the fun parts are still a joy to engage with. Synthesising items with alchemy is a blast, as well as meeting a new ensemble of interesting character new and old. Although the new characters may not be as strong, they are strong enough to help continue to drive this game forward.