For those of you who still play Fire Emblem Heroes, Book III dropped this week and among the new cast of story characters, is Thrasir. Serving the side of the Dead, Thrasir is voiced by none other than Lizzie Freeman, the very same Lizzie Freeman who leant her voice to Lily in Dragalia Lost earlier this year.

With time on her hands and plenty of questions, Switch Nindies took to interviewing Lizzie this week and here is how he got on:

Miketendo64: With your first acting credit being for Dust: An Elysian Tail in 2012, what first prompted you to try your hand at voice acting?

Lizzie Freeman: My interest in acting began in 2008 when my friends convinced me to try out for my middle school’s place. I loved the experience and continued acting through high school and college. My senior year of high school, in 2010, is when the idea of doing voice-over kind of came to me. I always had a fascination with animation and cartoons, and one day it occurred to me that people actually get paid to do the voices for the characters in the cartoons I loved so much! I thought that sounded like the coolest job ever and it combined two of my passions together. Cartoons and acting! I started experimenting with what my voice could do and uploaded some “fandub” videos onto YouTube.

Miketendo64: What was it about Dust: An Elysian Tail and the character you voiced Bopo, which intrigued you about the project?

Lizzie Freeman: After several months of making my silly YouTube videos I received a message from a user named “D-mac Double”. He explained to me that he was a casting director for an upcoming indie game, being “Dust: An Elysian Tail” and that he wanted me to audition. He saw some of my dubs, and some of them got his attention. To be specific, one of my “My Little Pony” dubs as the character Applebloom, since she had a southern accent and there were characters in the game who would need that accent.

So, to answer your question about Dust, nothing drew me to it or Bopo. I was approached about it and auditioned for a few characters. I auditioned for Fidget, Ginger, and Bopo and ultimately got the latter role.

Miketendo64: Fast forward from 2012, to 2018, you’ve gone from voicing a character in an indie game, to being a voice actress who has voiced various characters in Mobius Final Fantasy, Popoi in Secret of Mana and involved with two of Nintendo’s mobile games. How have you found the journey and was it what you expected?

Lizzie Freeman: As for Mobius Final Fantasy, I’m not in that and I’m not sure why the credit is on my IMDB. I was living in Utah at the time….

A few of my credits are not factual and I’ve been desperately trying to get them removed with no luck. Anyway, after Dust I spent some years in college. I hated it. I knew I was wasting my time.

During my college years, I participated in the “Disney College Program”. It’s basically Disney’s way of getting eager college students to work at their theme parks for extremely low wages haha. I worked at Disney World for 3 months as a character performer within that program though and I absolutely loved it. When my program was over and I had to go back to college I was *miserable*. Sooooo I left college and auditioned to be a character performer at Disneyland. Did that for a year. There was a good 4 years or so where voice-over was just not taking off at all in a professional sense. The only real role I had on my name for 5 years was Dust. After that year at Disneyland and not having any success with voice over I went back home to Utah for a couple years to get things sorted out.

Then I came back to California in 2016 and just reeeeaaally tried to put myself out there. Go to classes, meet people, socialize more with my friends in the industry. And lord, it is PAINFUL sometimes spending time with those friends when they talk about work and you have nothing to contribute to the conversation. My friend reached out to me when I was at a pretty low point and just sent me all these amazing resources to help me out and he sent out emails to people to recommend me and get my name around.

That’s when the Secret of Mana audition came about and that ended up being my first booking after moving back here.

Miketendo64: As the voice of Thrasir in Fire Emblem Heroes, you get to play a villain who is new to the franchise. Other than what you were told about the character, were you given any creative freedom in which you could do with her?

Lizzie Freeman: I had pretty minor plot details. I’d be given some context on the scene and give a few takes. The director would give feedback if necessary after each take.

Miketendo64: So you were not aware of anything (minus minor plot details) before being cast for this character? Did you find out you were the voice of Thrasir before the general public or did you find out when we did

Lizzie Freeman: I found out when you all did. I did not even know her name. My friend sent me a message saying “Hey, I got the new patch in Fire Emblem. Are you one of the new characters in it?!” *OH SHE’S OUT I GUESS. COOL.* Did snooping, found her name, what she looked like and sure enough, there was my name. Hahah. She looked even edgier than I thought she would.

Miketendo64: Haha that’s amazing! Where you a fan of Dragalia Lost or Fire Emblem Heroes, before you found out you were cast for these projects?

Lizzie Freeman: I never played a Fire Emblem game before actually, but I always played as Ike in Smash. I didn’t know about Dragalia Lost at all.

Miketendo64: You might not be able to answer this question, but since you do provide a voice for a character in Dragalia Lost and a character in Fire Emblem Heroes, was it a case of you auditioning for one role, which led the way for you to get the other? (Was it your portrayal of Lily that led you to audition for Thrasir? Or the other way around?)

Lizzie Freeman: Dragalia Lost and Fire Emblem were recorded at completely different studios and me getting those roles has no connection.

Regarding Fire Emblem Heroes, I had received the audition from a studio that I’m in the roster for. Went in and did a live audition for it. I auditioned for two characters. One of them was a lot more chipper and more my typecast, and I thought if I got one it would be her. But nope. It was edge lord lady (Thrasir)! I had actually worked on Fire Emblem Heroes months before my role as Lilly in Dragalia Lost. Thrasir is so far from what I am comfortable doing, so she was a bit tough for me to perform.

Dragalia Lost was a different story, where I had been contacted to voice match a project completely separate of Dragalia Lost. Which is what led me to being the only American Voice actor present in the game. Since she was brought in from a different game and they wanted to keep her voice as it was. I just happened to book it for that other project at a really good time. (Her original VA couldn’t continue doing the character for some reason?) And after that booking, I was contacted about Dragalia Lost.

Miketendo64: If you could voice any Nintendo character (from any series) who would you pick and why?

Lizzie Freeman: Daisy, cause she is the best princess in the Nintendo verse. Change my mind. Peach would be aight too. I always liked that Daisy was the spunkier, more lively of the two though. If Deanna ever retires from the role, I hope I can get that audition.

Miketendo64: Given the number of RPG’s you’ve been involved with, are you much of an RPG gamer yourself?

Lizzie Freeman: I do love me some RPGs. I’m a pretty avid Pokémon fan and I have about 40 hours in Let’s Go Eevee and over 100 hours in Pokémon Moon.

Miketendo64: Since Super Smash Bros. Ultimate is out, have you picked it up yourself and have you found your main? (Preferred fighter to use?)

Lizzie Freeman: I love the new Smash Brothers and my mains are Daisy, Chrom, Inkling, and Toon Link. (Add Thrasir as a spirit please.)

Miketendo64: You most likely won’t be able to name what it is, but have you got anything lined for 2019 in way of another video game for potential fans to pick up?

Lizzie Freeman: I have a few fun projects that will be coming out next year. I can not say what yet though. However, I can tell you about a YouTube animated series I will be in called “Gods School”. The first episode comes out on the 20th this month, and I play Aphrodite and Sfiga. It’s basically like Monster High, but Greek mythology characters in high school. 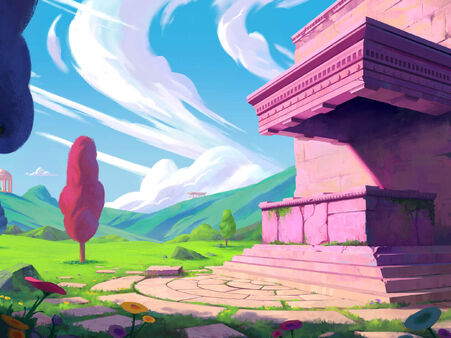 Thank you for your time Lizzie, your answers and your time, is most appreciated!