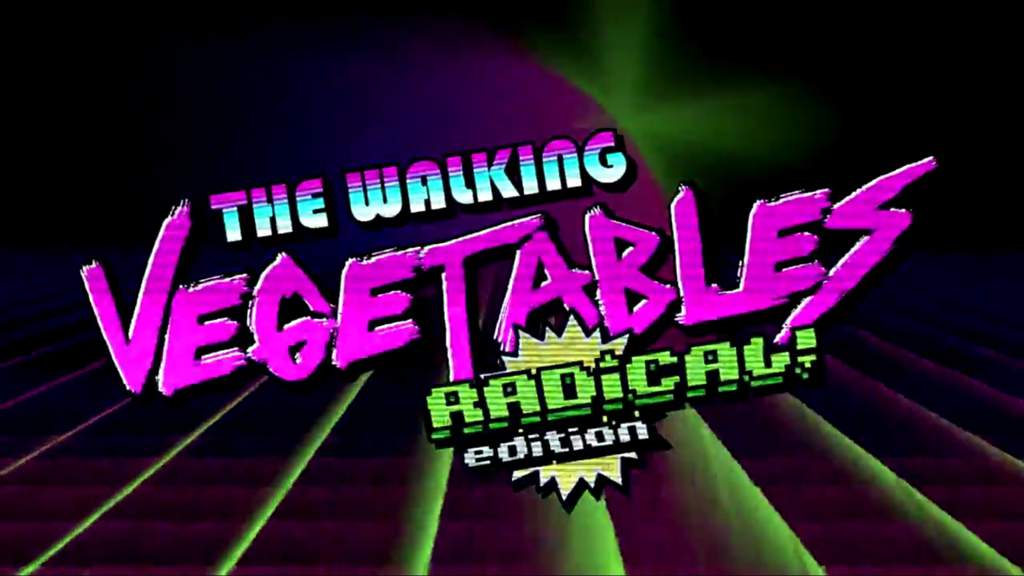 November 9, 2018 7:19 am Published by minusthebrant Leave your thoughts

I remember back in the day on my Sega Genesis booting up Zombies Ate My Neighbors for the first time and being blown away with the amount of shoot ‘em up content that was at your fingertips. The Walking Vegetables: Radical Edition, from developer Still Running and published by Merge Games, is a title where instead of fighting zombies, you are fighting hordes of bloodthirsty, psychotic veggies in a quest to take over Earth. While my nostalgia meter rates high for twin-stick shooters like this, does it have enough to keep me wanting to play more?

The Walking Vegetables was released last year and is now out on the Nintendo Switch as the Radical Edition. It is a top-down shooter set in the midst of an alien invasion in the year 1980. You are immediately thrown into the action and tasked with taking out every last insane veggie on the planet. There are rogue-lite tendencies at play and you will inevitably die, but are always learning new techniques and gaining new weapons to advance further.

I was immediately engaged and intrigued by the retro aesthetic best exemplified in either vaporwave art, or how it resembled Hotline Miami: a game of the same genre. There is really nothing too special about the pixel-based art style, but the art is enhanced with visual effects such as CRT style scan lines and other quirks to create a visually appealing 70’s aesthetic.

Fitting in with the 70’s/80’s culture, you actually travel around in a Delorean and some call-backs to classic entertainment properties of that era, but it’s not overly heavy-handed to the point of being obnoxious. The soundtrack, on the other hand, moves as fast as the world does, with heavy use of synthesizers, and as you drop down to your final health the music only intensifies, mirroring the beat of your heart.

Each level in The Walking Vegetables has a vast open area to explore with plenty of extra rooms to go into for extra loot, or you can speed your way through and do the minimum amount of work possible. The open exploration of each level helps make the world feel much larger, and the stages more varied.

Walking in between areas or houses feels like traversing a hub world with enemies coming at you from all sides, lending to the connected nature of the levels. This does lead to one problem with the level design in that once a level ends a car will pick you up and then drop you off in a new area to begin the cycle of annihilation all over again. I wish the levels were more intertwined, instead of feeling like separate and isolated areas.

The gameplay is pretty much like every other twin-stick shooter, you use the right stick to aim, press the right trigger to shoot, right bumper to use your secondary melee attack, and can also use molotov cocktails or grenades. There isn’t much more to the combat, but when there are several dozen alien infested produce walking and running towards you, it can get somewhat hectic.

As you go about your mission of finding the alien key to proceed to take on the boss in order to move on to the next stage, you stumble across a wide array of weapons that can either be purchased or found in chests from clearing an area of enemies. At the end of each part, you are treated to a pretty engaging boss battle and each boss is unique and exciting as you try to figure out how to defeat it.

There are many different types of ever-encroaching veggies you’ll be shooting at and they are all varied. Different fruits or vegetables have different traits and even sub-classes between them. The shooting and controls felt responsive for being able to hit them successfully, and they all have very well designed animations for each action.

I never felt like I had seen the same enemy too many times, or that the game had run out of ideas for enemy types. Some of the enemies even resembled The Binding of Isaac levels of creepiness and that had me wanting to continue on to see what enemy type I would run into next.

One of the best features of The Walking Vegetables is how local co-op is incorporated. I found having a friend to play alongside broke up the monotony, and also made the game easier. At first glance, this title does not seem to have a whole lot to it. You will do a lot of running, gunning, dying and repeating this over and over again. This may be somewhat off-putting at first, but upon multiple playthroughs I found the depth to be more engaging. It did take several lives and determination to find the worthwhile content within the title and that could make more casual players give up faster.

Overall, The Walking Vegetables: Radical Edition is a fun and frantic twin-stick shooter that features a great art style and a unique premise. While some may be turned off by the grind it takes to make progress, I felt the gameplay mechanics and nailing the feeling of ‘one more run’ mentality really helped make this an enjoyable experience. If you are hankering for another top-down rogue-like, similar to The Binding of Isaac, The Walking Vegetables is a worthy addition to anyone’s Switch library.