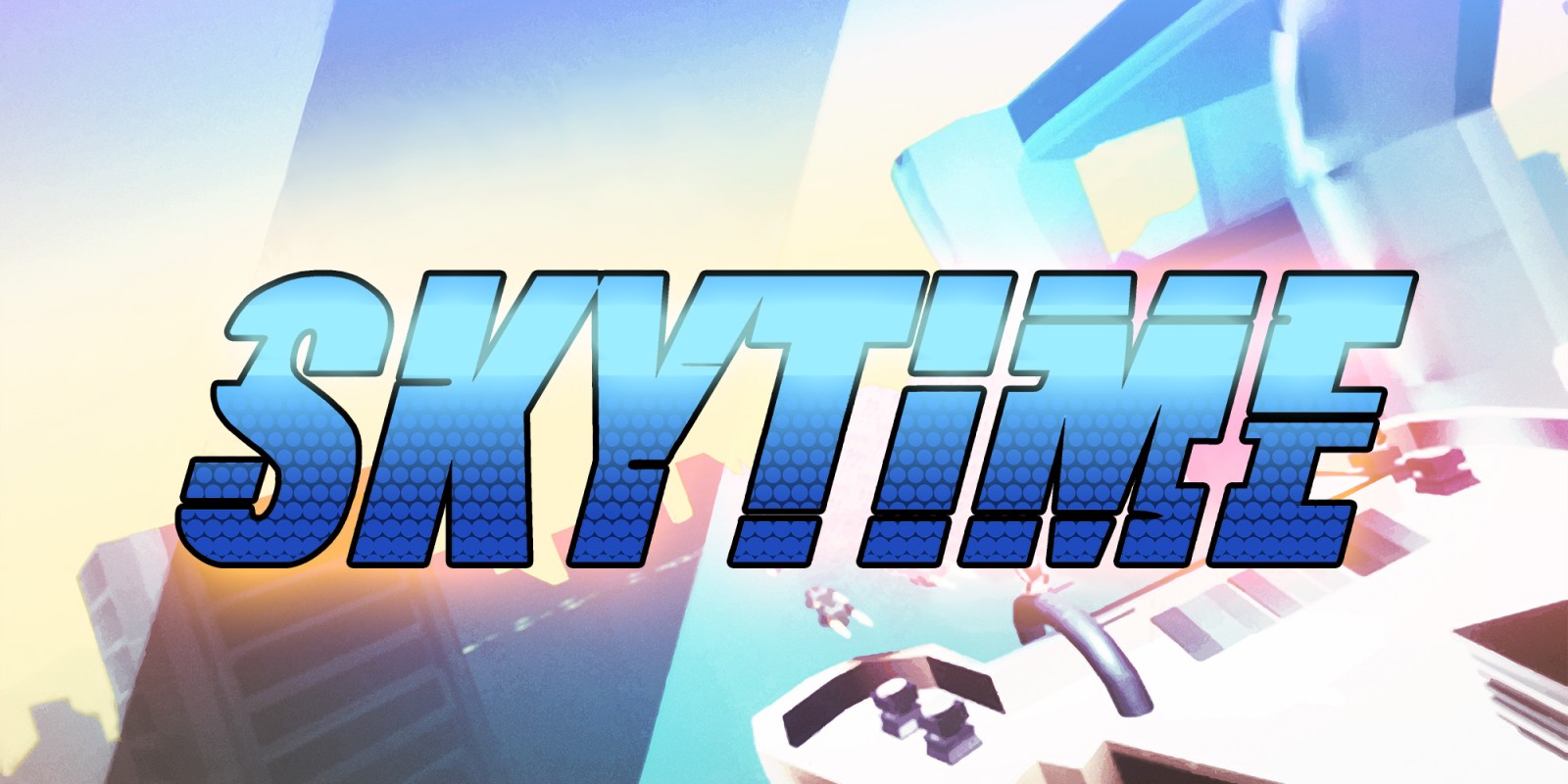 Get ready to slow down time itself as you dodge bullets and jump vast distances between skyscrapers. It’s time for our SkyTime review from Sometimes You.

SkyTime is an indie game that released on Steam back in December 2016. It is published by Somtimes You and has now been brought over to the Switch. It received fairly mixed reviews during its time on Steam but it’s low price of $0.99 might have been what aided some of its positive review.s The Switch is home to many Indie games, much like Steam and there is plenty of competition for this title.
SkyTime is a 3D platformer played in the first person perspective. You are a scientist who loses his family in an avalanche and hopes to bring them back. After building a time machine using a stolen reactor core from an evil private military company, you are on the run, Avoiding capture and trying to bring back your family. The story sounds interesting on paper but it is very poorly executed. For someone who is avoiding capture, not once during any of the game’s 9 playable levels do you actually see anybody chasing you. In fact, there is hardly any mention of anyone in the entire game except the opening cutscene which is told through a silhouette, comic book animated style. At no point does the game match up with it’s supposed story in any way, which makes the story irrelevant.

The graphics are not unpleasant but they do need some polish. Some of the edges upon close-up are rough and there is almost no shading or shadowing. Being in first-person perspective, you can only see the arms of your character and what he is holding; a stopwatch and a plumber’s wrench. The detail on the watch is quite nicely done but the wrench itself could have done with a bit more attention to detail. The environments of each level use all the same models and backdrop and don’t really offer much in the way of variety.
The music and sounds are very generic as well. There is no change in music composition and the odd grunts from your character’s jumps can be quite distracting. The grunts never change in pitch and in a game that is based on constant jumping from platform to platform, you may find yourself playing with the sound down or completely muted. The voice acting in the opening sequence is below average and lacks emotion and feels very rushed. It feels like someone is trying to get through their lines as quickly as possible or that the audio was sped up to fit in with the cut-scene.

The idea of the game is to jump from platform to platform and reach the end checkpoint. Platforms consist of City Skyscrapers and flying cars. It isn’t all plain sailing though, there are turrets that open fire on you which, you can destroy by throwing your wrench at them. The turret’s projectiles can be evaded using your stopwatch to slow down time. The stopwatch’s feature is also useful for jumping long distances as it maintains the height of your jump until the stopwatch’s effect wears off. You can’t slow down time indefinitely but it does recharge automatically so you can use it again and again.
The Stopwatch is a major lifeline but has to be used in moderation. If you make a jump from a platform to another and don’t have enough charge on the Stopwatch, you will fall short and have to start the whole level again. There are only 9 levels in total that progress in difficulty as you play them. However, the difficulty lies in how frustrating it can be trying to judge jump trajectories, especially when attempting to land on top of small moving vehicles. Slowing time helps somewhat but you do have to know when to deactivate and reactivate the watch. Otherwise, you will miss the landing and fall to your death.

The controls can be a little unresponsive at times, most particularly the jump button. If you get caught up on the side of moving vehicles or buildings, you can lose the ability to jump. When this happens, you are left with no choice but to self-terminate by pressing the – button. The stopwatch can be activated by pressing the L button and the Wrench can be thrown and called back with the R button. You move around with the left joystick and turn with the right joystick.

For the price it is, it isn’t going to break the bank but there are a lot better platformers out there for not much more than is being asked for SkyTime. Still, at $2.99, it is three times more than it’s asking price on Steam. It only has 9 levels to play and there is very little replayability. The gameplay itself is fine enough on its own but the story does nothing to motivate the player or bolster the experience. I don’t dislike the game but I am left rather indifferent after playing it.

There are too many components that are working against itself in SkyTime and it just doesn’t add up. I am not a fan of writing negative reviews but I must be honest, SkyTime may occupy your interest for the hour or so, for the time it would take you to complete it, but you may wish you had your own time machine to go back in time to get that hour back.